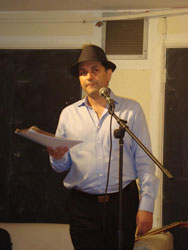 Ali Abdolrezaei was born in 1969 in Northern Iran. After passing the nationwide university entrance exams, he attended Tehran Technical and Engineering University, where he graduated with a Masters degree in Mechanical Engineering.

He began his professional poetic career in 1986 and became one of the most serious and contentious poets of the new generation of Persian poetry. Abdolrezaei has had an undeniable effect on many Persian poets, through his poetry as well as his speeches and interviews. His 21 varied books of poetry, including In Riskdom Where I Lived, Shinema, So Sermon of Society, Improvisation, This Dear Cat, Paris in Renault, More Obscene than Literature, Hermaphrodite, A Gift in A Condom, You Name this Book, Only Iron Men Rust in the Rain, Terror, La Elaha Ella Love, and Fackbook, endorse his poetic creativity and power. His poems have been translated into English, French, German, Spanish, Dutch, Swedish, Finnish, Turkish, Portuguese, Urdu, Croatian, Arabic, and other languages.

In September 2002, after his protest against heavy censorship of his latest books such as So Sermon of Society and Shinema, he was banned from teaching and public speaking. He left Iran and, after staying a few months in Germany followed by two years in France, moved to London, where he has been living for the last 5 years. His website is at www.abdolrezaei.com.

Interview carried out by email by Jack Little, UK/Mexico.

1. How does Iran’s global political position affect your writing?

There is a big difference between a poet and a politician. A poet always tries to change himself or herself but a politician wants to change others, so, I’ve never written politically. Of course I have always just wanted to be the best Ali Abdolrezaei there can be in the world! But I was not able to do that because of the huge censorship in Iran, this was the main reason I started a big fight against Iranian government. I never wrote politically but the Iranian government knows me as a political poet, now I’m a banned poet who is not allowed to live in his country and Iranian newspapers or publishers are not allowed to publish my poetry. Iran’s politics have affected my whole life and not just my writing. Everything that I write is political because it’s written in Persian. I don’t believe in their close minded God and so I try to be a global poet whose words live in freedom.

2. Can poetry make a difference?

My best poem is my life which is burning me. My poems are its ash. I think the best poem is never started but it’s never finished also, because when its poet was writing it, he or she had rubbed out the other poems that had been written by others who liberate words from the steadfast grip of definition. I’ve learnt from W.B. Yeats that out of the quarrel with others we make rhetoric; out of the quarrel with ourselves we make poetry, that is a mirror which makes beautiful that which is distorted. I write so much because I need to mould more lumps in the darkness of my mind. I still write, because I’m sorry, so this all means that a poet writes because he wants to make a difference, without this I would prefer to stop using my pen.

3. Which poem sends a shiver up your spine, no matter how many times you read it?

Carl Sandburg had written that poetry is an echo, asking a shadow to dance but I don’t know what poetry is, I only know what it’s going to be or how my creative reader can rewrite it. I only encourage my words to dance and play in the wrong role. My readers can’t find poetry in my texts unless they bring some new ideas with them. Each poem carries within it the soul of another poet who’ll write; it only can help him or her to write again. It’s not easy to tell a real poet from the poem. A real poet never listens but he says nothing by creating silences around words. Poetry always rebels against what it was before. I think poets are the architects of words, but after all is said and done a poet is not much more than an archivist.

4. What are you reading right now?

5. Which contemporary Persian poets would you recommend us to read? Why?

There are many contemporary Persian poets whose poems I like, like Yadollah Royaee who lives in Paris. Reza Baraheni is another poet and critic who writes with a difference and he always re-news his ideas. Mehrdad Fallah is a younger poet whom I like because he constantly changes the style of his writing or Parham Shahrjerdi who is not a poet but as a professional critic he writes amazingly, and I always find many new ideas in his essays or articles. I also like Abol Froushan’s poetry. Abol is my English translator too and without his translations I couldn’t continue my writing in exile. You know poetry is the art of breathing shadows. Each word is a shadow that walks between lines on the page. English is not my first language, so the shadows are far away from my fingers when I write in English. There is as much difference between my poetry in Persian and English, as between the smell of a flower and of a perfumer's shop. I believe the worst fate of a poet is to be in exile where he has to write in a foreign language, so, Abol helped me cut short the distance between my ideas and the English language.

I always thought my love will bring love in the loved girl but love is an act of faith and I hate all faiths. So, I have faith in words which have made this world. I am a poet who knows poetry is the perfect verb for hunting elusive nouns. I know a poet's job is to shape the world as a word, to name the unnameable and stop the words which play their regular role on a page but I prefer to forget these all.

The majority of poets have been mysteriously silent on the subject of faith. Although a poem starts itself in pleasure and ends in wisdom, poetry is the art of uniting faith with words. There is no time interval between the words and the thought when a real poet writes, both of them happen together. During the act of a creative mind, the words are re-born in poetry. This is the reason that I believe there is no similarity between a poet and a prophet. I think Ishmael couldn’t be Abraham’s son; he was a poem that Abraham had never written. The difference between a poet and a prophet is being ready to kill himself not his son. I don’t know why all people name their fault, experiment! Why is our life’s genre comedy? We always have to repeat our mistakes to be experienced, why!? The children always ask everything, they know everything when they become elderly. These all are the reasons that older people pray to an unknown. We must finish this comedy soon.

Life is short, shorter than my short poems, this is the reason that I prefer to write short poems nowadays. In a way I have died in each poem I have written. I mean that I’m experienced in death and I don’t fear it any longer. I’ve recently written a short poem that relates to this question.

a poet who writes more

wants more deaths than others

Poetry is the essence of a language and now let me answer this question by some short poems that I wrote in English recently.

because of your prayers

Are you looking for a fool in my lines?

poetry can’t school you in folly

A wound in the heart

(The last verse of God)