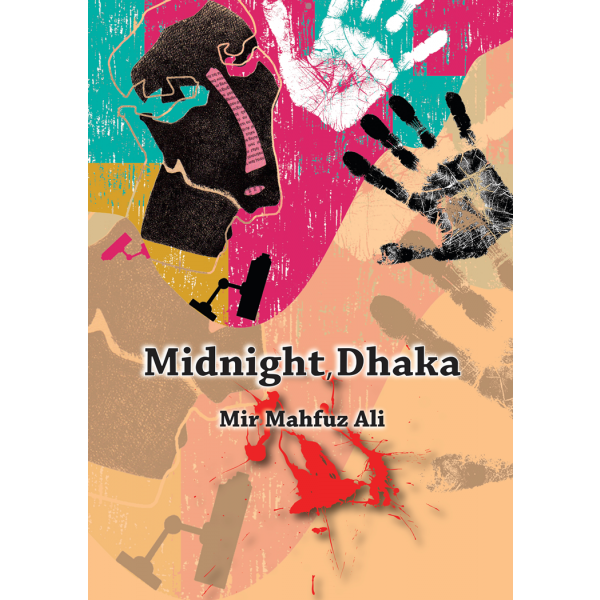 Published in issue 37 of The Ofi Press.

Mir Mahfuz Ali, winner of the Geoffrey Dearmer Prize 2013, talks to us about love, hope and survival in a haunting way in his first full collection Midnight, Dhaka, while describing his trauma in the 1970s, during the war in the country now known as Bangladesh. He is catching and recording the details of horror with his ‘Nicon eye’: a boy (back then) witnesses vanishing houses, rape and beatings. Even the most peaceful situations might turn into nightmare, all the parents’ warnings make sense; but Mahfuz, from the perspective of an adult, finds peace again, writing poetry is his way to heal the wounds.

‘Trees had a breeze on them. I was probably five. A fine cool day.

We travelled on a minibus with my uncles and aunties, our

destination, the Garo Hills, where the jungles were dark below

the eastern Himalayas. We heard the Garoes were tiny black

people, but their hearts were bright. They welcomed visitors with

Night was charcoal. Silence was loud. Fireflies moved like shooting

stars. We stopped for a rest, climbed out of the bus and loosened

our muscles. I thought I heard a distant cry clear as a cricket chirp

and grabbed my uncle Monsur’s hand. He held me tight, hushed us

all, asking us to listen to the sound coming from the depths of the

forest. We stayed all together and followed the cry.

He had a stout stick the size of a baseball bat in his right hand.

Kept hitting the boy who had more bones than flesh. My eyes

roved around the large room. The house was full of stretchers,

walking sticks, pushchairs made with the wheels of children’s prams.

In another room a set of ten makeshift beds on the wooden floor.

A group sat together looking at the dim flame of the coopi-lamp.

They all had broken bones. The sun had burned their skins.

Some had limbs missing, eyes poked out. I had no doubt it was

the place where beggars were beaten into the shape all beggars

become. Now I knew why my mother was so fearful of the

baby snatchers, warning me never to talk to strangers.’

Sometimes it is difficult to tell good from vicious, there’s grief and beauty on each side. The cobra is ‘clean-smelling’, the human hands are threatening:

‘A snake charmer came to catch a cobra hiding

inside a water-pot on our rear veranda.

All known miseries strike at his feet when

carefully he rolled the jar over, to force the snake out.’

‘All that the snake charmer had was his

binagini flute, so he played the note

in that place where tree-wasps dance. The tone

could feel its way between my tongue

and heart – one was too quick and one was

too slow, needing much blood to understand

how the serpent might have been withered by his scorn,

for this cunning cobra had now gone back

to its lair under the bamboo bush. The snake

twitched in the hedge, knew the man

was looking to smash its nest.

His spade was a gleam going to the ground

with a beat not quite matching the reptile’s,

now chiselling away the earth little by little.

And the snake hid under its own coil

where every scale shone grief.’

(A Basket of Sorrow)

Mahfuz’s influences include Rabindranath Tagore and Jibananda Das, he follows the Bengali tradition of telling stories as if they were songs.

His singing poems prove human beings are capable of renewal through a cleansing process, coming to maturity: ‘you have to rot before you ripen’ (Nandita).

Mahfuz transforms suffering into a beautiful read through the fresh, evocative language, the raw emotion and the sensuousness. He has written of his poetry, “I want the taste to linger in the readers’ mouths and on their skin.” And it does linger.