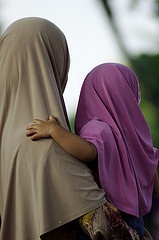 Friday is the day of the week when extended family comes together. This Friday, all the aunts on both sides of the parents are coming over. That means, I should expect a grilling.

Cheeks are kissed. Salutations are exchanged. Shit is about to hit the Arabian fan.

Aunt Laila, on my father’s side, thinks the country is going to hell. She tells most of the adolescent cousins and elders that social decay is much worse now than it was back in the 1970’s and 1980’s. The older men are quiet.

I burp out a loud laugh. I say, “Do you mean when they had discos? When alcohol was legal? When women wore miniskirts and sleeveless shirts? Was that the social balance you would like to see again?”

“Be quiet, infidel!” She sarcastically states. “Let me finish!”

Aunt Laila starts to express how the country belonged together. Neighbors knew one another and traveled together. Subject matter was intimately discussed, for hours on end. Unlike today, where people talk and have relationships with their mobile phones. “The cell phone has become a personification of a spouse.” She iterates.

She believes that the new government has also nationalized too many people, unnecessarily made everyone the same class rank. “These new Kuwaitis are overpopulating an already tiny fraction of a developed Kuwait.”

“Many of them are foreign women married to Kuwaitis who have been nationalized into creating such a population explosion,” I tell her. “Don’t we have some cousins who fit that?”

My remark falls on deaf ears. She says, “Some of them are now even members of parliament, who dictate to older generational Kuwaitis what should and should not be set as the social norm.”

I agree with many of her points and listen closely. Until, she starts hashing Kuwaiti marriage. I know it is her method of superimposing it on me since I am single.

She also, undoubtedly, sides with the woman. She believes most women are victims of circumstance. They are cultivated and seasoned for marriage, raised like cattle. Raised to only be with one man.

This is where I really want to listen to her meanderings.

She continues and says that Kuwaiti women are subservient to their husbands, the woman’s family name and honor.

My chuckles infuriate her. But, I apologize immediately after.

Soon, she shapes everyone who is listening. She successfully gets the pity she has solicited. But not from me. After seeing my disapproving body language, she releases a sigh and asks if I have a better interpretation of marriage. In Kuwait.

So, I give her a run down of how marriage stands today amongst the unmarried. At least, in my eyes.

“How do Kuwaitis search for and meet potentially worthy spouses for marriage?” I ask them. I answer, “They examine the concept of marriage first before the character of the person they want to marry.”

She starts to put down her tea and recline slowly back on the sofa.

I continue, “For marriage in Islam is primarily about procreating children for its faith than the faith of up keeping an individual’s personality. Instead of a couple’s emotionality.”

Her eyebrows arch. So do my mother’s.

I tell them, “They also pre-fabricate an ideal image of all the qualities they would like to see in their partner, without wanting to think of any negative consequences of their choices far down the road.”

Disagreement is definitely in the air. I have not only provoked them but invoked something as well.

“And they expect that person to instantly materialize from just one or two shallow meetings. No dating. No intimacy. Just traditional chaperoning. Of words. Of thoughts. Of behavior.”

Both women nod their heads in support.

“It’s like going through a drive-through McDonald’s and expecting a presentably edible and conveniently delectable combo-meal, the way it is greatly advertised. When the fact is, it is not healthily prepared, cooked, constructed, or delivered. Advertising hides so much.”

“Nor is the food expected to be healthily digested,” I relay.

“Oh, so we are food now.” My aunt interrupts. “I guess we are just disposable things.”

“No. That is not what I am saying. Now, and with all due respect, let me finish.”

“They search for ‘Mr. and Ms. Right,’ when according to statistics and wisdom, these two often become ‘Mr. and Ms. Wrong’ a few years later. If not months.”

I stick to my train of thought and say, “Sectarian, socioeconomic and educational backgrounds are also of top notch. There is little tolerance for pre-accepting and working with a person’s natural faults, such as historic promiscuity and reoccurring mistakes, which most likely will increase. Which will most likely add texture and meaning to the marriage.”

My preaches make my mother pour another hurried glass of tea.

“Instead, a person’s artificiality and perfection are duly eyed. They expect a made-up doll as a total package. As an eternal spouse.”

Now most of the females listening respond with dramatic sighs.

Aunt Laila tries to gather her supporters, “You know nothing!”

“May I please finish, aunty?”

She stares away, making impatient gestures to leave the room.

I continue, “This very same image should derive with impeccable attire and a soft and unthreatening character. The potential spouse should be visually irresistible, monetarily flexible, religiously enduring, and someone parentally indivisible.”

“You speak like you have experience in marriage. Like you have had children. Endured pain and shame. Just to hold on to a social harmony that is cursed, whether staying in a marriage or divorcing it altogether.”

That rattles me a little. Aunt Laila has a point.

I continue with a deeper touch of sympathy, “Don’t many wonder why so many divorces are happening in our little country?”

This grabs their ears.

“Miscommunication, misanthropy, little varied premarital experience, inbreeding, high expectations (with little to show in turn), and closed-mindedness.” Now all of the women’s eyes are peering at me. “Stating one is ‘open-minded’ does not necessitate it! Many Kuwaitis are only ‘slightly-stretched-minded’ at best. These do not promise a healthy marriage!”

“Eat your own shit,” my younger brother mockingly says, quickly coming up the stairs, walking past our room and into the bathroom.

I get pissed. Recompose myself. And continue. “We have one of the highest divorce rates in the world per capita. So, before talking about equal rights and democracy for our country’s future, for our supposed victimized women, think about all of the unequal and undemocratic procedures, for instance, most choose for their marital futures.”

“Really!” My mother steps in. “Do you truly believe what you are saying, son?”

“How have you come to such a conclusion?”

I further add, “If you want a democratic country, then you should first choose who you want as a life partner, totally by your own will instead of the will of older generational pressure and abstract religious beliefs.”

“We should have never raised you in the US!” mother interrupts. “Their ideas have corrupted you . . .  let us find you a good woman to marry. Enough of this nonsense of a life you live!”

“Abstract, Concrete.” My father suddenly slips in. He has come to tell us that lunch is ready downstairs. Then he leaves. That is it; nothing else comes out of him.

“Your father knows best,” Laila suggests. “He knows when to speak and when to be silent. And, he is the man who helped to give you life, sustenance, creativity . . .”

“He definitely is. And that is why I can talk to you women like this today.” I parcel a soft wink at them.

“Words. You have so many words. So many to sell, too,” a tart of a female cousin throws out.

Many of the elders begin to move downstairs.

I attempt to finish, “These usually become insufficient when trying to maintain a companionship, instead of just maintaining a framework of a family. When the former is missing, the family, which is often symbolic of government, will start to show cracks. The foundation will irrevocably self-destruct.”

I end at what I perceive to be a high note.

The women, as usual, dismiss my words as mere rhetoric, like I am a young politician attempting to snake his way through wise-old and well-earned ears. Or, little may they know that they have little advice to give the next generation when it comes to marriage. The women married their neighbors and cousins at very early ages, with no varied experience beforehand.

Haitham Alsarraf teaches English at Kuwait University in Kuwait and has recently published a collection of short stories about the 1990 Iraqi invasion of Kuwait titled, Invasion Occupation Awakening.