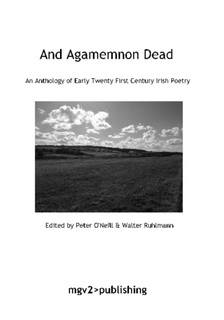 ‘History is written by dyslexic spiders/Across a burning page’ Amos Greig states in his poem ‘Belfast Child’. The Preface for this anthology is equally defiant, setting out its arena as a locus for a dissenting  poetry from a parallel universe among more familiar, mainstream voices. There are twenty poets featured, of which six are women, and the range is wide – from the wordy experimental work of Michael MacAloran to the funny and self-deprecating tone of Arthur Broomfield. Dylan Brennan’s work is assured and vivid, his name being familiar to me from his stunning collection ‘Blood Oranges’, with its Mexico City connection, and I liked Rosita Sweetman’s poems, including the haunting ‘Threnody’ to a drowned fellow writer. Christine Murray’s line ‘Imagination is dark, always will be’, from her poem ‘Someone Wants Lovecraft’s Head’, stayed in my mind. Peadar O’Donoghue’s exuberant  and energetic poetic style I enjoyed, as in ‘Corvus’ – ‘big filial fettling of unflustered floosterings’.

It is very much a mixed bag, as any interesting anthology should be, containing work that attracts and some that doesn’t. It’s an admirable assembly of poets from all over Ireland, living both North and South of the border, or those with Irish identity, and there’s a range of poets at different stages of their careers, some with collections, others who belong to workshop groups, then those somewhere in-between. This brings a welcome freshness in both technique and subject matter that other more restrained ‘name’ anthologies can lack.

The prose piece by Colm Kearns (‘Euro 88’) on a football  match as an extract from a history  of the UEFA European Championships was interesting but felt out of place surrounded by poems and given no context for its inclusion (but I may have missed the point here, being uneducated in football). mis-spells Lineker throughout (as Linekar) and if I have a criticism to make it would be that there are many typos throughout the whole anthology which could have been avoided with more thorough proofreading. However, as a glimpse into what’s being written and what’s being thought about and discussed in less mainstream Irish circles (the up and coming?) it’s a fascinating read.