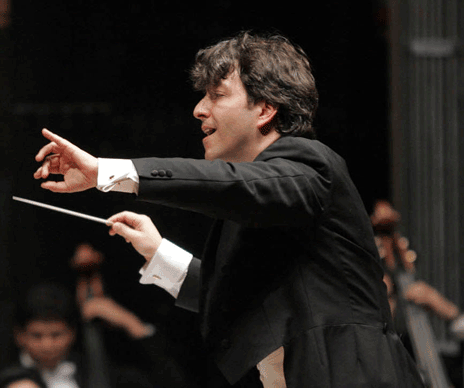 José Areán is the leading Mexican opera conductor of his generation. Highlights in his career include conducting Rolando Villazón's triumphant debut in the role of Nemorino at Bellas Artes Theatre (2000), and the 1999 production of Carlos Chávez' only opera, The visitors, which was premiered in its final version at the Cervantino International Festival to critical acclaim by the Mexican and Spanish press.

The world premiere recording of this work, led by Areán, was released in 2000 and received the Mexican Association of Critics' Best recording of the Year Award.

His concert hall activity is equally relevant, having conducted international soloists such as Philippe Quint, Sarah Chang, Giora Feidman, Jorge Federico Osorio, Pablo Ziegler, among others. In 2005 he became Associate Conductor of the Mineria Symphony Orchestra, one of Mexico's finest.

In 2003 Areán conducted the Mexican premiere of Judith Weir's The Consolations of Scholarship, as well as the world premieres of Séneca, by Marcela Rodríguez (2004), and En susurros los muertos (On the whispering Dead) by Gualtiero Dazzi (2005), conducting its European premiere in Basel (2006). He was the General Director of Bellas Artes Opera, Mexico's national opera company, in the 2007/2009 seasons. He conducted the critically acclaimed opera Only the Truth, by Gabriela Ortiz, a world premiere in its final version (2010).

Areán's intense activity in the new music field led him to become Musical Director of Onix New Music Ensemble, a versatile chamber group wholly dedicated to the performance of contemporary works. With Onix he has conducted many world and Mexican premieres of works by Latin American and international composers, and has performed regularly at all Mexican Festivals and in New York.

Born in Mexico City in 1966, Areán's musical training started at the age of six. After piano and double-bass studies at Mexico's National School of Music, he went on to study conducting at the Vienna Conservatory, where he graduated with honours in 1995.
He has recorded five commercial CD's and over twenty concerts and operas led by him have been broadcasted by TV and radio nationwide in Mexico. In 2011 the TV channel BRAVA NL in the Netherlands recorded under his baton the first ever video of Offenbach's Barbebleue in original language. He worked with the Arditti Quartet as artistic producer of "Mexico, New Music for Strings" (mode records).

He conducted the soundtracks of the films "Under California, the limit of time", directed by Carlos Bolado, (which won the Mexican Film Academy Award, the Ariel, for best music) and "Human Beings", directed by Jorge Aguilera, both with music by Antonio Fernández Ros. He led the Prague Philharmonic Orchestra in the soundtrack of Arturo Ripstein's "La virgen de la lujuria" music by Leoncio Lara Bon. Together with this composer he won the Cristal Screen Prize for the composition of the soundtrack to "Brusco Despertar" (Sudden Awakening), directed by Ernesto Godoy.

From 2002 until 2007, José Areán was General Director of the Mexico City Festival, one of Latin America's foremost international performing arts events. He produced, among many highlights, the first-ever Mexican staging of Wagner's Ring.

He serves as a member of several Boards of Directors and Trustees (Mexico City Festival, Bicentennial Foundation) and as Musical and Programming Consultant to several institutions. He was elected by the magazine "Lideres Mexicanos" as one of the 300 most influential leaders in the country in 2006 and 2007.

1. Has music always been an important part of your life? What is your first memory related to music?

Music was always around in recordings and live concerts. My first musical memory is the sound of the piano which was at home, an old concert grand in which my father enjoyed to play the one song he could play: an Italian song called "the Lake of Cuomo". Hearing that meant my  Dad was home, so it was with a mixture of both joy for the beautiful melody and the anticipation of welcoming him that I remember it warmly.  That's the piano I started to play as a little kid. Later on, my father took us to symphony concerts. He is a real fan of classical music.

2. When the music stops, how do you unify your team of musicians?

Conducting is like coaching a sports team. It's the players who do everything. So my job is to organise and lead them into the strategy, so to speak: into a coherent version. I keep telling them "listen". After the music stops, it is me who must listen, and try to unify a direction from all their different backgrounds and experiences, which gives the group its personality and energy.

3. Conducting has many formal rules on how to direct the orchestra but how do you impose your own style and passion upon the performance?

Rather than imposing something, we look for the expression that the score holds. Mahler once said that everything is written in the score, except the essence of a piece. So rehearsals are a kind of research laboratory in which every one comes together to find the common ground which will render the text alive, organic and expressive.

5. You have had so many highlights in your career but is there one which really stands out?

You never forget your first concert. Otherwise, I fall in love with what I'm doing each concert, so it's impossible to choose. It's like the love for one's children.

6. Is there a piece of music that never fails to move you emotionally?

Yes. The opera La Bohème always proves irresistible. So does the adagietto from Mahler's 5th Symphony. I admit my sentimental nature.

7. What advice would you give to a young musician starting out on his or her career?

Make music with the joy and freshness that you felt when you first heard it as a child. Never loose that feeling. Give it your everything and never compromise.