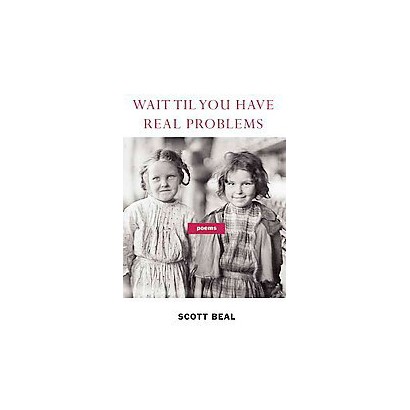 This long collection of work by Scott Beal, his debut collection, is divided into six sections over 136 pages. As a debut, a showcase of the work of Beal, if you like, it is generally impressive. The book opens with a section titled ‘Fury Tales’. Its opening poem, ‘The Dream of the Foam Toy Sword’ is a poem that entices the reader, as it should, with its status as opening poem. It follows the title (running on) with:

is as real as you, as real as the reign
of your inner confetti machine. The way you want
to be a real housewife of Orange County […]

This sense of mystery, at once draws the reader in. The image of the foam sword swings back and forth between reality and imagination; with the sword […] ‘the way it wants to be a real sword,/to thicken its foam into devastating iron.’ However, the poem does feel slightly long and repetitious.

This is not a problem with the following poem, ‘Chicken Soup’. This poem again draws the reader in with its wonderful opening line: ‘Instead of your soup I picked us up/ a six-pack to split.’ It then weaves a rather magical trail, encompassing the supposed history of chicken soup taking in such references as medieval nuns on the way to going some way to explaining the origins of the soup. The intimacy of the opening lines are returned to with the final, rather humorous line: ‘I promise, could anyone/make a story up like this?’

Beal’s mode in this opening section feels like he has stories to tell, stories to share. Though these are often good and force the reader to engage in a way, there is a slight feeling that some of these poems exist in the wrong genre. Surely ‘Chicken Soup’ would make for an excellent short story?

The domesticity that appears in section one of the book continues in section two, which is titled ‘Shade’, with poems about family and a heavy emphasis on religion. Beal is a natural when it comes to opening lines. The poem ‘First Service at Bedford Nazarene’ opens with the following stanzas:

The Ark had a rollover accident and we’re trapped
in the cavern of its hull: warm wood beams

curve to the inverted V of the vault, and perpendicular planks
frame the ceiling. The girl behind us starts to sob.

The sequence continues its narrative with poems about the conception of twins and ‘Second Service at Bedford Nazarene’ opens with: ‘Even before the priest’s speech uncoils, we are shambled./A child has died. We have heard a mother split grief into notes […]’ These wonderfully strong lines with vocalised language uncoiling and splitting, do the right amount of work in the poem and indeed, in the section.

There is a lot of good poetry in this collection. However, the book feels too long, certainly for a debut collection. It does offer value for money, but there is a sense that a keener editorial eye would perhaps have cut one or two of the longer sequential poems and revealed the stronger material within. Beal can certainly write. Had ‘Wait ‘Til You Have Real Problems’ been half its length, with fewer sections, the book would have been twice as strong. It certainly would have been a more noticeable book, certainly as a debut. It will be interesting to see where Beal goes from here.