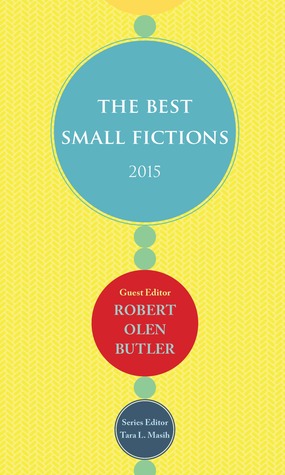 The Best Small Fictions 2015 is an anthology of compelling and affecting flash fiction and short shorts, compiled and edited by Tara L. Masih and Robert Olen Butler. These fictions were selected from a variety of small-press magazines. Over fifty authors have their work represented here, so this review will focus on four that serve as representatives of the anthology’s general level of quality.

Butler is keen on defining his use of the term ‘small fiction’ rather than the more conventional names for the genre. He uses the introduction to emphasise the difference between a ‘story’ and a ‘fiction’ (one has a plot; the other, a truth) and he provides a brief, beautiful description of what a ‘fiction’ is meant to do:

‘A small fiction is a lone wolf of a lie, sometimes hounding the truth across a field but oftentimes simply sitting on a hilltop to raise its face to the moon and howl of love or loss, pain or fear, hard-earned wisdom or benighted ignorance. We listen to small fictions like nightsounds from afar. They enter us briefly, in sweetness or sassiness, in hilarity or aching sadness, but they leave us imprinted with freshly experienced truth.’

Not every fiction is a story, in the conventional sense. Not every truth has a plot. This maxim is made manifest in J Duncan Wiley’s ‘A Notice from the Office of Reclamation’ which conflates the dangers of spelunking with the artist’s implacable desire for discovery and knowledge. Here, the rational world wishes to discourage all unsafe discourse. Speaking through the authoritative voice of The Office, all (potentially profitable) plunges into the dark are discouraged with the reminder that failure is often mortal:

‘We understand the urge. We are human. We too have come across those dark, sighing cavities in the earth’s crust, a few gray timbers or rusting rails lying scattered around their mouths. You see such a place, and you know that people have gone that way before. You know the passage was safe once. Then you start wondering: What’s it like inside, just beyond the reach of sunlight? Did those others leave anything behind? What if there’s a seam of gold or silver, just waiting for you to discover it? We know this urge, know how strong and primal and erotically charged it is. But before you rush off to penetrate the mysteries crowding your imagination, we say this to you: Resist.’

Of course, as Jung states (and the author knows), every real treasure lurks in death. The bureaucratic narrator of this page-long piece of prose urges the reader to ‘resist’. The author (and the reader’s squalid soul) shouts, ‘Go!’

There is no plot in ‘A Notice from the Office of Reclamation’, just a description of a variety of mind, and the cautious rationality which opposes it. The same cannot be said of Jane Swan’s ‘Eat Beetroot’. This story seems, at first, to hinge on a bloody description:

‘Mariana ate sliced beetroot straight from the can, as if it were a sacrament. The disc, not quite the colour of blood, dripped as she put it onto her tongue; she held it there for a moment, chewed and swallowed.’

But there is a plot here. There are characters who move, change, and grow over the course of a few hundred words. The last sentence of this story (about a hungry, would-be mother) twisted a knife in my guts. I would ruin it, if I gave away any more.

Although most of the fictions gathered here span at least a counted century of words, one was written specifically for the medium of twitter. Stephen Orloske’s ‘590’ is ancient in theme, brilliant, and (like the life it describes) it is brutally brief:

‘No one is watching how I weep into the earth, thought Abel as his brother’s cudgel fell again, that now there is neither one God nor many.’

There’s a plot there, too, and a desperate revelation.

By contrast, Roland Leach’s ‘Angle’ is a meditation on the impossibility of ever knowing another person all the way through, and the doomed desire which prods us into trying anyway. Leach writes:

‘I only knew an angle of my father. An acute angle. A tiny
slice that changed from where you stood. I sometimes caught
him in the corner of my eye and thought, that’s him. Getting
out of his truck, dirty from work, pine resin on his arm hair,
black oil across his face. Or in the Chrysler with the kids
singing.
Never was.’

These small fictions are nearly very good poems; they have that impact, that force. They are small, but powerful, like tiny bombs which rip the mantle of the earth and reveal the gaping, treasure-laden caves beneath. Read them slowly, one at a time and with many pauses between them, so that when they detonate in you you’ll retain enough crust to have someplace to stand when you stoop down to look.