More
Poetry Review: 'To Banquet With The Ethiopians: A Memoir of Life Before the Alphabet' by Philip Brady 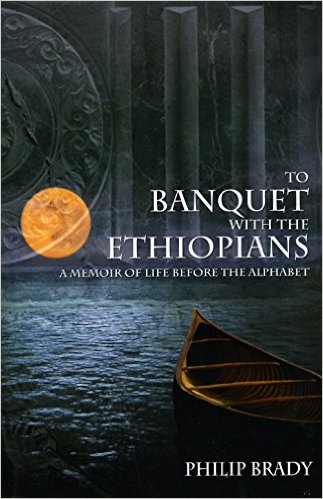 Bringing home the truth: on Philip Brady’s To Banquet With The Ethiopians: A Memoir of Life Before the Alphabet

Where to start? The beginning? Not so easy when one is confronted with questions that move beyond constraints of time, that beg the reader to contemplate death alongside mythical life, to view familiar stories as if they are not already lived and told but re-lived and re-told, sailing forward and backward across the sea of time.

And so, I begin this discussion with strife – the tension that holds everything together.

In Philip Brady’s introduction to a reading of Book III of To Banquet with the Ethiopians[i], the poet talks about the significance of Achilles’ shield – in Homer’s writing and in his own. He first notes the importance of the moment:

The description of the shield, which occupies almost an entire book (Book XIX) is the only place in the Iliad where Homer leaves the field of battle, and leaves the Trojan plain, and describes life in the domestic world: weddings, farming, a lawsuit, as well as small battles and fights… And of course it’s all engraved upon this terrible weapon of battle.

Brady then speaks of the shield in metaphorical terms:

[A]ny of our descriptions in writing… in some way are bound to be on a golden tableau: frozen and… inauthentic.  …In many ways, our alphabet culture, our written culture – the poetry from that culture – is a long, complex lament for our inability to have lines that are conceived and spoken in one breath.

– which is at the heart of his epic memoir-in-verse, stated in even clearer terms in the TOC’s introduction to Book VI:

Literary poetry is presented as a construct to resist prose and evoke myth-time when lines were conceived and spoken in one breath. Yet, trapped in the alphabet, poetry cannot recover but only elegize mythic all-in-now. Both the Iliad and the Police Camp burn within these tightening parentheses.

At 84 pages, this book can be read in one go, but I advise readers to take their time. The parallel themes link ancient struggles to modern-day questions of life and death, with a central query into the physicality of being and the eternal state of not being. Moving fluidly from ancient Greek warriors to modern teens (the above-referenced Police Camp), the verses are an ode to the art of storytelling, from Homer to Joyce. They represent an examination of interlocking stories and the inherent difficulty of language. They also contain reflections on fear and bravery, and on fathers and sons.

What intrigues me most is how the poet moves between stories, across landscapes of time and myth, and how he situates himself in a long tradition of exploration and discovery.

The verses flow between history and present, between the inventive overlapping worlds of Ithaca and Queens, between the battlefields of mythical proportions and the everyday concerns of a present-day poet. In addition to the main drama and all its layers (sickness, healing, fear, death – big themes), the poet employs Homeric voices and scholars to support his effort, urging the reader along at the opening of each book, reflecting on key themes and considerations. So, for example, Timothy Findley opens Book XII, considering the problem of how to tell a story (a guide for the poet himself):

I didn’t quite know how to tell this story, until I realized that if I were Homer, I’d have recognized that this isn’t just the story of men and women, but of men and women and the gods to whom they are obedient, and told best through the evocation of icons. So what I must do is transpose this story, which is history, into another key, which is mythology.

And here’s Derek Walcott’s reminder, inserted mid-tale, at the opening of Book IX:

If you think of art as simultaneity... then Joyce is a contemporary of Homer.

Along with Findley, Walcott, Solia Jephardt, and other scholarly types – with, course, Fagles himself – the reader is also gently prompted in key places by Leucothea and Helen of Troy.

And while real things happen, too – warriors and boys are revealed to be ruthless and mean; death shows up in expected and unexpected places – the chapter in which Homer attends a poetry workshop in Queens, for example, or when an academic panel considers “The Homeric Question” (from royalties to demographics) playfully poke at the notion of real. While exploring his own mortality, and the very violence of life, Brady must have had a helluva good time writing this story, even as the very act of writing it all down confined and restricted him to those lines and rhythms that he so worries over.

Indeed, at the crux of it all is the idea of being bound (a word/ idea we are reminded of in several places) by time and mortality vs. being open-ended and infinite: the idea of life (bound) and death (infinite).

This volume in verse is about coming to terms with one’s own mortal path, against the backdrop of enduring myths that traverse time and reason, and it forces the reader to look beyond those “tightening parentheses” referenced in Book VI, to let dream and memory flow alongside, or into, reality. Specifically located in the murky realm of myth, it is, by necessity of form, grounded in the present-day rules of reality. Which brings me back to the poet’s introduction of Book III, when he reminds us of Heraclitus’ take on things, when he introduces the chapter:

Homer should be turned out of the canon and whipped. He was wrong in saying  “Would that strife should perish from the world.” He did not see that he was praying for the destruction of the universe. Everything emerges from and made necessary by discord.

And so, the book begins and ends with strife, with discord. If any large-scale theme emerges here, it’s the rather banal notion that life is, quite simply, a struggle without end, without knowing the outcome. But again, it’s not the content so much as the poetic method: how the idea of never-ending is evoked by the rhythm of verse and the poet’s use of time sequencing: how he considers time as it both interferes with and enhances storytelling (oral storytelling, in all its fluid and improvisational form, vs. written poetry,  which “measures lines by the length of the present moment as conceived rather than experienced”[ii]); how he plays with past, present, and future as they collide on the page, in characters and across battlefields, both literal and metaphorical; how he takes the reader through history and myth, just as so many storytellers before him have done.

And just as I did not know where to start when I sat down to write about this story-in-verse, I don’t know where to end. Which I find appropriate, and suggest the poet would as well. After all, a story may not start at the beginning – Odysseus himself urges to being wherever we shall – or end at the end. And so, I end here, first with Michael Longley, who opens Book XIII:

I am walking backward into the future like a Greek.

– a constant rhythm and theme in Brady’s work. And, finally, I point to the careful placement of Jonathan Shay at the opening of the last verse (Book XVIII), reminding the reader that myths inform the hard truths of modernity. Shay uses the Iliad and the Odyssey to write about war and homecoming in the context of Vietnam, and there’s no better quote to remind the reader about the line between story and reality, between fiction and truth, than the one lifted from Shay’s Odysseus in America:

The Iliad may have been a fiction, but the bard sang the truth.

At the end of it all, I like how Philip Brady situates himself in the deep tradition that flows before him, how his text interacts with earlier interpretations of Homeric myth, how he takes on his personal story as an academic and intellectual challenge.  In short, I like how Philip Brady tells his personal life-death story, and how he relies, necessarily, on the voices of others to bring home the truth.

[ii] As stated by Solia Jephardt, The Death of Utterance, quoted at the opening of Brady’s Book VI.