Published in The Ofi Press Issue 34 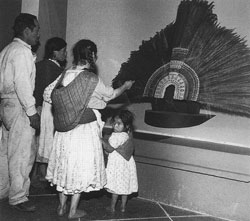 Tlatelolco. The flat grey slabs underfoot, the ruins of the Mexica city, the church made from the toppled temples and the rectangular despair of the apartment blocks. All these things are reminders of the past. In 1521 the Tlaxcalan army, with the help of a few hundred Spaniards, defeated the armies of Cuauhtémoc. Mighty Tenochtitlán was brought to its knees and thus began centuries of Spanish dominance. In 1968 government forces murdered a few hundred students that peacefully protested in the square and in 1985 a great many people's lives were ended when a massive earthquake destroyed large swathes of the megalopolis including two thirds of the Nuevo León building. Large families crushed to death. To stand in the square today is an eerie experience. A grey monolith commemorates the students that were massacred by the government with the words of Rosario Castellanos. She remembers the hoax, the cover-up, the newspapers' refusal to investigate. Even in sunshine the scene is bleak. Would it be possible to feel the same disquiet if one were ignorant of the historical significance of the place? In other words, do profound acts of violence leave a metaphysical residue? Is there a magic aura surrounding historically significant places and objects? We can assume that is nonsense as it most surely is but we can never know for certain with regard to Tlatelolco. Anyone who visits it is keenly aware of its significance. A residual energy or the weight of prior knowledge?  In other words, why does Umberto Eco, in his Travels in Hyperreality, not feel a sense of awe and wonder in the presence of the perfect copy of Michelangelo's Pietá? It is a perfect replica. A perfect replica. A replica. It looks the same. However, it does not emit, as the original must, a sense of historical importance. The knowledge of the 'reality' of the original is a major part of its draw. Just as people want to stand upon the hallowed grounds of past events so too do they yearn to touch old stones that were sculpted by well-known masters. To lay their fingers upon historical significance. To steal an image on their smart phones and to bask in the radiance of this show of reality. There is something present that is more than the sum of its parts. Transubstantiation. Alchemy. No flash. A small miracle at a safe distance. Take that away and it becomes a perfect copy, but a copy nonetheless. A few kilometres away from Tlatelolco, in the magnificent anthropology museum of Mexico City, visitors can gaze upon El penacho de Moctezuma. Moctezuma's headdress. It's not a headdress and it didn't belong to Moctezuma but that's not the real con. Turn around. In the same room visitors can see the massive Aztec Calendar. It was certainly not a calendar. The word Aztec was not used by the Aztecs. Like Chichimeca, an umbrella endonym. However, it was made by the Mexica people and is a genuinely old and monumental piece of fabulously decorated stone. The problem with the headdress, in addition to it not being a headdress, is that it is a replica. The original, the real one, is to be found in the Ethnology Museum of Vienna. How it got to Vienna is easily explained by anyone with a passing interest in the Hapsburg family's involvement in New Spain. The replica is beautifully constructed and equal in splendour to the sixteenth century original. Yet one's heart sinks at the sight of the word 'replica'. We feel cheated. The victims of a cruel hoax. We try to hide behind the indignation at the arrogance of colonial Europe. Do we feel that way when gazing upon true pieces of the true Parthenon in London? Yes, there is an argument for returning the piece from Austria to the land of its origin. A strong argument. But the viewer is really angered, not by the injustices of colonial thievery, but by a far greater affront - the spectacle of falsity before them. The clash of civilizations, a gift from the Mexica to the Spaniards, the precise moment, the quetzal's feathers spanning centuries. But it's a fake and its unseen and weighty residue evaporates. Light as feathers, fake and unmagical.

Dylan Brennan’s poetry has been published in a number of Irish and international journals such as Poetry Ireland Review, Revival Literary Journal, Arabesques, Agenda Broadsheets, Tributaries, The Ofi Press etc. A teacher of English literature, and a doctoral student of Mexican literature, film and photography he has also collaborated with the Fundación Juan Rulfo on two of their recent publications El gallo de oro (2010) and Juan Rulfo: Otras Miradas (2010). In 2006 he featured in the Poetry Ireland Introductions Series. He lives and works in Mexico.