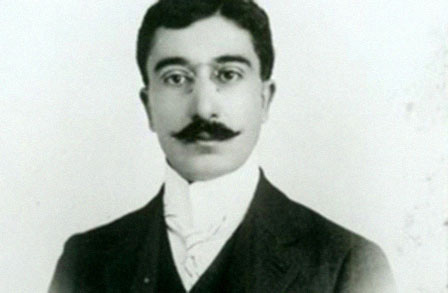 An Essay on Constantin Cavafis

At the end of the 19th century, the city of Alexandria in Egypt had become the most important centre of Hellenism. This not only because Athens had to overcome the difficulties of setting the foundations for a independent, Greek nation, but because of the fact that a majority of prosperous citizens had established themselves in the Egyptian city, creating the appropriate environment for the development of a “Greek” culture. Educational institutions, hospitals, export companies with large assets and adequate future were samples of the Greek “invasion”, which was not a new tendency, but a continuation of the ancient history. Greeks had always retained strong bones with this district, offering a unique motivation for the creation of a great city. This is Alexandria of 1900’s, a “city of lights”, with a mixed population of different social, ethnological and religious origins.

You said, "I will go to another land, I will go to another sea.
Another city will be found, better than this.
Every effort of mine is condemned by fate;
and my heart is -- like a corpse -- buried.
How long in this wasteland will my mind remain.
Wherever I turn my eyes, wherever I may look
I see the black ruins of my life here,
where I spent so many years, and ruined and wasted."

New lands you will not find, you will not find other seas.
The city will follow you. You will roam the same
streets. And you will age in the same neighborhoods;
in these same houses you will grow gray.
Always you will arrive in this city. To another land -- do not hope --
there is no ship for you, there is no road.
As you have ruined your life here
in this little corner, you have destroyed it in the whole world.

Constantinos Cavafis, was born in this environment, receiving even from the period of youth a variety of spiritual influences, which highly affected his poetic universe. In 1863, the year of his birth, Alexandria was at the peak of her power and was also a pioneering city of art. Cavafis had a cosmopolitan education and by 17 he had already visited some of the world’s most important cities, like London and Istanbul. This life of exploration can be seen throughout his body of poems, perhaps most strongly in his beautiful poem, Ithaca:

When you set out on your journey to Ithaca,
pray that the road is long,
full of adventure, full of knowledge.
The Lestrygonians and the Cyclops,
the angry Poseidon -- do not fear them:
You will never find such as these on your path,
if your thoughts remain lofty, if a fine
emotion touches your spirit and your body.
The Lestrygonians and the Cyclops,
the fierce Poseidon you will never encounter,
if you do not carry them within your soul,
if your soul does not set them up before you.

Pray that the road is long.
That the summer mornings are many, when,
with such pleasure, with such joy
you will enter ports seen for the first time;
stop at Phoenician markets,
and purchase fine merchandise,
mother-of-pearl and coral, amber and ebony,
and sensual perfumes of all kinds,
as many sensual perfumes as you can;
visit many Egyptian cities,
to learn and learn from scholars.

Always keep Ithaca in your mind.
To arrive there is your ultimate goal.
But do not hurry the voyage at all.
It is better to let it last for many years;
and to anchor at the island when you are old,
rich with all you have gained on the way,
not expecting that Ithaca will offer you riches.

Ithaca has given you the beautiful voyage.
Without her you would have never set out on the road.
She has nothing more to give you.

And if you find her poor, Ithaca has not deceived you.
Wise as you have become, with so much experience,
you must already have understood what Ithacas mean.

When the poet’s father died, Cavafi’s wealthy standard of living came to an end and he eft Alexandria due to severe rioting between the immigrant population and local Alexandrians. On his return, he remained in the city for the rest of his life, without journeys and experimentation. Cavafis was assimilated into the soul of the Egyptian city, not only as a follower of the spirit but as a man who defined the “human” characteristic of a place, using the atmosphere of it throughout.

At the back of the noisy café
bent over a table sits an old man;
a newspaper in front of him, without company.

And in the scorn of his miserable old age
he ponders how little he enjoyed the years
when he had strength, and the power of the word, and good looks.

He knows he has aged much; he feels it, he sees it.
And yet the time he was young seems
like yesterday. How short a time, how short a time.

And he ponders how Prudence deceived him;
and how he always trusted her -- what a folly! --
that liar who said: "Tomorrow. There is ample time."

He remembers the impulses he curbed; and how much
joy he sacrificed. Every lost chance
now mocks his senseless wisdom.

...But from so much thinking and remembering
the old man gets dizzy. And falls asleep
bent over the café table.

Constantinos Cavafis was not recognised, while he was living. The new poetry, which he was representing, was not yet a thing to be accepted by the lyrically focused and traditional, Athenian, poetic scene. Time had not come for something so different, so capable of referring to the people, for a poetry focused on the most indifferent things of usual human days. It was more because of his sexuality that poets from Athens could not easily compromise with his work. The desire of Cavafi is obvious throughout his lifetime body of work.

Like beautiful bodies of the dead who had not grown old
and they shut them, with tears, in a magnificent mausoleum,
with roses at the head and jasmine at the feet --
this is what desires resemble that have passed
without fulfillment; with none of them having achieved
a night of sensual delight, or a bright morning.

Cavafis was ahead of his time and rarely humanity is ready to change its own, special elements. This is the main reason that Cavafis poetry remained unknown for a long period and only in 1950’s we could see a large interest from the academic community and the critiques.

The most remarkable characteristic of Cavafis poetry have to do with the form and  theme. He denies the traditional methods and forms, but on the other hand, he reaches history, in order to borrow his topics for exploration. He retracts personalities from several, historical periods of Greek history and through them he manages to refer to more ecumenically. Cavafis poetry begins from the partial in order to refer to a wider perspective. History is the great field where he can collect the most suitable elements for his meanings, his thematic ambitions.

When suddenly, at the midnight hour,
an invisible troupe is heard passing
with exquisite music, with shouts --
your fortune that fails you now, your works
that have failed, the plans of your life
that have all turned out to be illusions, do not mourn in vain.
As if long prepared, as if courageous,
bid her farewell, the Alexandria that is leaving.
Above all do not be fooled, do not tell yourself
it was a dream, that your ears deceived you;
do not stoop to such vain hopes.
As if long prepared, as if courageous,
as it becomes you who have been worthy of such a city,
approach the window with firm step,
and with emotion, but not
with the entreaties and complaints of the coward,
as a last enjoyment listen to the sounds,
the exquisite instruments of the mystical troupe,
and bid her farewell, the Alexandria you are losing.

This is the first and the most important observation for his creations. In addition to that, Cavafis ignore the traditional, poetic principles. That means that he doesn’t use things as meter and rhythm in his poetry, at least not in the usual way. The poet preserves an internal rhythm that can be felt, cannot be recognised from a literary point of view. It is mainly accepted, nowadays that one who reaches Cavafis poetry must feel, must recognise his aims through a sensitive way. Of course there are poems where he uses a meter, but mainly denies to accept the form and composes a speech that is more in prose, than poetic. Even if his sexuality can be defined via his poems, Cavafi was not able to come out openly as homosexual. This is because Cavafis could not, even in Alexandria, speak easily for so delicate things. We could characterize his poems as concealed, with meanings which can be understood through a more careful and sensitive reading. Cavafis poems are settled in historical, erotic and philosophical ones, always according to the theme. But we could easily distinguish as the best, those which refer to historical personalities and, secondly those, which have a connection with the erotic life of the poet.

The importance of Cavafis poems are vital through his influence to the art and because of their vanguard. Cavafis poems are still read with an undiminished interest by the majority of the people. Someone said that is poetry which can prevail on language. Constantinos Cavafis poetry manage to succeed that, because it is the human sense that survives in his poetic intention.

Return often and take me,

You beloved sense return and take me,

When the memory of the body wakes,

And an old desire comes again through the blood,

When the lips and the skin remember,

And remember your hands touching again.

Return  often and take me at night,

When the lips and the skin remember…

Apostolos Thivaios was born in Athens in 1980. He is still living at the capital of Greece where he is working as an accountant. He comes from a country with great poetic tradition. Cavafys, Elitis, Ritsos, are some of the poets who have influenced him. He has published two books of poetry. “City Road, number 28’’ and the ‘’17’’, a group of seventeen poems exploring urban life. He thinks of poetry as a way to sing his sadness. He publishes essays with several magazines of literature in Athens and other cities in Greece.