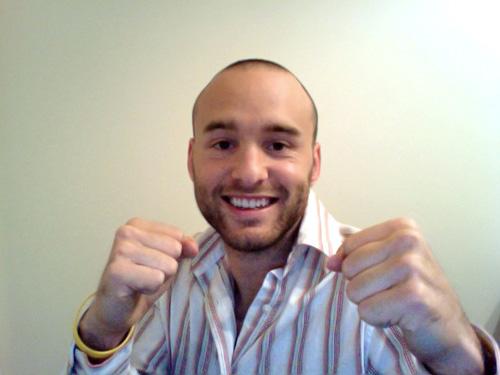 Cameron Conaway was the 2007-2009 Poet-in-Residence at the University of Arizona’s MFA Creative Writing Program. He is 2-0 at 155lbs as an MMA fighter. He has trained with Renzo Gracie, the London Shootfighters and will soon study Muay Thai in Thailand thanks to the sponsorship of www.WhatsYourFight.com. An MMA fighter and an award-winning poet; an MMA Trainer at Gold’s Gym and a creative writing instructor for Johns Hopkins Center for Talented Youth; a certified personal trainer through the NSCA and a dynamic anti-bully spokesperson, Cameron is known worldwide as the Warrior Poet. Tuttle Publishing will release his memoir, Caged: Memoirs of a Cage-Fighting Poet, in August 2011. Salmon Poetry will release his book of poems, Until You Make the Shore, in January 2012.

http://cameronconaway.blogspot.com
Interview carried out by email by Jack Little, UK (Published in Issue 16)
1.Why write?

For me, the two primary reasons for life are (1) to help each other and (2) to document our experience here. This encompasses not only all of science, art and learning but also life in general. Helping the elderly man cross the street, holding the door for the person coming into the gas station, etc. Writing allows me to document and - especially from the responses I’ve received from CAGED - help others. Whether it’s a journalistic piece investigating sex slavery or a short poem told from the perspective of the mosquito, it all adds to the well of awareness. I believe this increases our ability to listen respectfully to the perspectives of others while also seeking out those new. Short answer: For peace.

3. Does an essential human spirit exist?  Do you believe in evil?

Great question! I’m skeptical of metaphysical spirits, but I’m a firm believer in the power of the human spirit, the will. What gets me fired up each morning is not to sell more books or make more money, it’s to simply do the best I can – same as the kindergarten teacher, the gardener, the neuroscientist, the single mother, Gandhi, the Dalai Lama, etc. It matters not how famous the name behind the spirit. We all have some fire inside us for something. The human spirit, particularly the human spirit I encounter everyday in others, is what keeps writing and life continuously interesting to me.

I’m a skeptic of evil as well. People commit all kinds of “evil” crimes, but I believe these happen because of something internal and human rather than some larger force outside of us.

4. What does it take to be a "winner"? Is winning everything?

To the first question: To not lose enthusiasm when you fail and to not lose humility when you succeed. This is much easier said than done.

For the second question: Contrary to the trendy answers out there, I believe winning actually is everything. Every part of our lives we are trying to achieve something positive by effort – this is winning. When we brush our teeth we try to get all the areas. Teachers try to implement great lesson plans. When we cook a meal we try to make it taste good. We try to listen to others when they are struggling. Of course in sport and professions, winning against the competition matters. But even if it didn’t we’d still try to win for ourselves either by giving it our best effort, winning against boredom to have some fun or winning against time by forgetting about its ticking.

5. What will the world look like in a hundred years from now? Is the future looking bright?

In 2112 I can see one of two realities. Either we find ways to continue developing technology to unbelievable levels or our degradation of the environment and reliance on finite resources catches up to us and we come back to a simpler life. Tying into question four, I think the future always looks bright so long as the human spirit isn’t blind to what sustains us. Look, our human spirit is always going to roar on – we’ve seen this even in (especially in!) history’s most atrocious events. But when this spirit is feeding itself by creating more toxic dumpsites, replacing earth with concrete and procreating to unsustainable extremes (as is happening now) I feel terribly concerned for those after us.

I have no idea! This is the question at the root of the Good Men Project. We’ve got writers from all walks of life coming together to add their piece to the...labryinthe. The writing is raw and real. It has to be. To get closer to answering the question we must strip down the male stereotypes that abound in our culture, in advertising and through our own prideful silences. The answer is an impossible one and different for everybody, but each essay written for the Good Men Project gets us a bit closer or unravels a new layer of thought and this continues to lead somewhere good. Some questions we pose: If a good man is a man that doesn’t do bad things then how do we decide collectively what bad things are? What if the motive is noble but the result is bad? What if it’s good personally but horrible globally? We also tackle breaking news stories – the Sandusky drama, for example – and try to come at it from as many perspectives as possible.

We do. And I’d even pluralize that – we all have battles to fight. For some it’s getting out of bed or being a better spouse, for others it’s cancer or ignorance or alcoholism or battling complacency to set new goals. For all of us though, health is at the forefront and rightfully so. WhatsYourFight.com embraces this idea fully. Every second we are dying, so whether we “feel” it or not we are in a constant battle with our own health. Health is a different priority in everybody’s life, but it’s a priority nonetheless. Personally, I’m a better thinker when I’m in top physical condition, so my battle to eat healthy and exercise rigorously is directly correlated to my ability to write well.

(Forthcoming in Until You Make the Shore by Salmon Poetry/originally appeared on FictionWeek.com)

“Nothing superlative or enchanting should be easily accessible.”

- Wallace Stegner, Where the Bluebird Sings to the Lemonade Springs

on human bodies or

nor can a bar chart

They speak to some though.

listen to the dilated pupils of eyes

to the deflated pupils

in their community, walking their streets,

sharing the same blue or gray