These works are the result of a collaborative project, bringing together poet Jake Campbell, and visual artist Mike Corcoran. The collaboration was born out a shared interest in the stories with which we are raised, the environments which provide the setting, and how these stories and settings form an inextricable part of the people we become. The individual, their surroundings and the stories associated with these surroundings are interconnected: one cannot be fully understood, without reference to the other two.

For the project, each artist was invited to respond to the other’s work: Mike, to produce an artistic interpretation of Jake’s poem, ‘Spelks’; and Jake, to produce a poetic response to Mike’s illustration, Bran. The project took each artist out of their comfort zone, no longer responding to their own environment and traditions, but to narratives and landscapes which they were encountering for the first time.

Mike Corcoran: On first reading ‘Spelks’, what struck me was the juxtaposition between the sharpness of the colloquial language, and the romantic sentiments it discussed; between the softness of the protagonist’s mirage, and the harshness of her reality. I was keen to reflect these contrasts in the work. On one level, it is a gentle fantasy of two lovers floating away in a dream, on another, it is a portrait of a broken individual contemplating suicide, her precarious shadow cast onto a stormy sea. The waves themselves are formed from the ridges of my own fingertips, reminding us that whenever we look out into the world, we see, in part, a reflection of ourselves.

Jake: Sitting in a pub in Wrexham about a year ago, Mike, who had recently finished his painting of Bran (which was a gift for my girlfriend and now has pride of place in our hallway) began telling me the back story to his painting, which is based on a branch of The Mabinogion, a compendium of medieval Welsh myths and legends. The giant Bendigeidfran, who is framed at the centre of the painting staring straight out to the observer, had waded with his army through the Irish Sea to rescue his sister, Branwen, from Matholwch, the King of Ireland who whisked her away years earlier, effectively enslaving her. My poem focuses on the sadness and sense of defeat I see in Bendigeidfran’s eyes, and I tried to recast him not as the giant he is portrayed as in the original story, but as an ordinary man: one who is fallible, human and – ultimately – another victim of brutal violence, despite his apparent might. 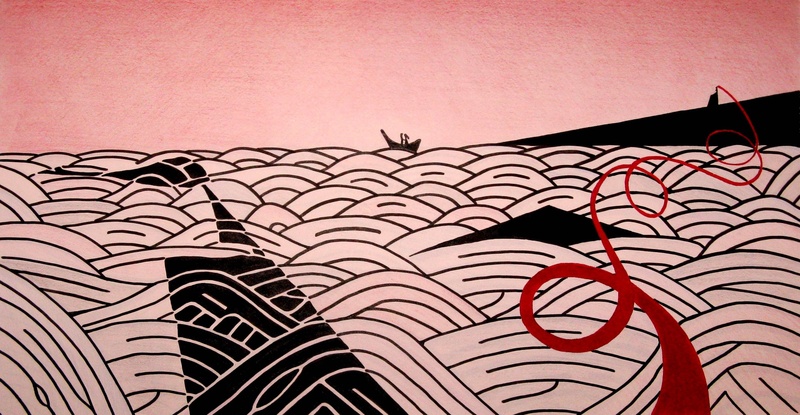 from your deathbed of rockrose and harebell.

Sail the slick of these tide winds to fly foot-first

through the sack hoist, descending to the mill stone.

You’ll find your father in The Cottage Tavern

Clip him twice round the ear; his tenancies are over.

Stagger through humid and hay-spangled air

till you reach your Jack-the-lad on Sandy Chare.

He’ll be crying by the kissing-gate,

a pair of tickets shredded at his feet.

Unrain them to the mending bend

of your palm, then waltz with him backwards

to the boat he’s mooring in the jetty. He’ll shout

but you may not understand; this is what you must do:

throw him into your arms and don’t let go

till you’re out in the easy waters past Whitburn Steel—

on England’s finger of coast behind you. 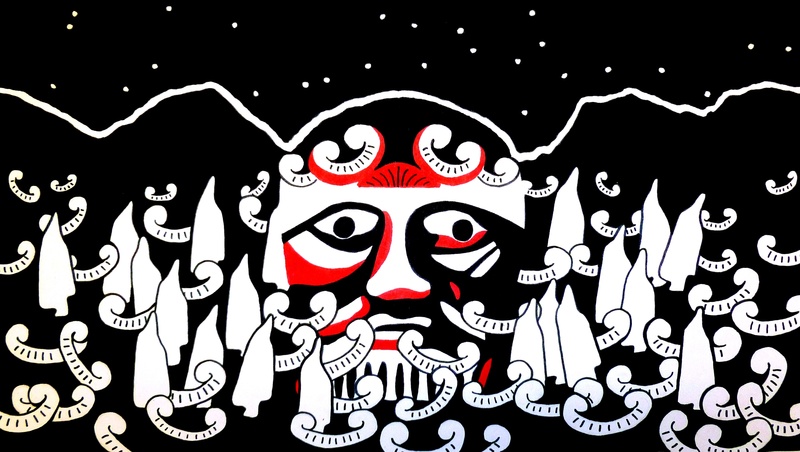 Your face beneath that fizz of stars

is not the warrior I read

on the Irish Sea for Branwen.

Here amid your ghost-like soldiers

you’re a giant frozen by the

ink of myth. I see in your eyes

that making your own back a bridge

you knew one day you’d give and snap.

Your key concern in this painting

must be — how do I carry on

when the main thing needed of me

is ballast to set others free?

About the Artist and Poet

Mike Corcoran was born and raised in Wrexham in north east Wales, where the Welsh landscape and traditions played an important part in his formative years.

Mike is a visual artist who works predominantly in pencil, ink, oil and acrylic. His works explore our sense of self and our perception of, and relationship with, our surroundings. They draw heavily upon scientific themes, as well as on the Welsh traditional stories with which Mike grew up.

Jake Campbell was born in South Shields, in North East England. He now lives in Chester, a few miles from the border with North East Wales.

At a house party in Wrexham on New Year’s Eve 2012, Jake and Mike discussed the potential of working together on a collaborative arts project, and nearly two years later, they eventually got round to it.

Whilst at the University of Chester, Jake completed an MA in Creative Writing, where he produced a long, narrative poem which explores the vacillations in landscape and memory in his home county of Tyne and Wear; particularly South Shields, which James Kirkup called “the most surrealistic town in Britain” – a statement Jake wholeheartedly agrees with. In 2011 he won New Writing North’s Andrew Waterhouse Award, and in 2012 he published his debut pamphlet of poetry, Definitions of Distance, with Red Squirrel Press.