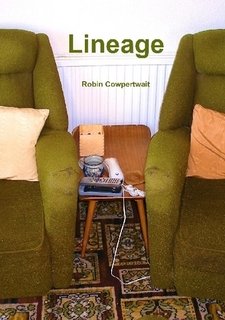 Published by Crazy Quilt Bouquet in 2011

Cowpertwait’s self published collection, Lineage looks at family life and illness; growing up and questions of identity. This micro review provides three of Robin’s poems from the collection. My favourite poem in the collection is “Goal Posts”.

If it was sunny,

No match for the telly,

(even though you were a racist)

until it was dark

If it was raining

(even though I didn’t know him)

crowds in the hall;

until it was tea

In kit too big then small,

With gloves and eye patch

(yes, even after the car crash)

Another enjoyable poem is Tour of Duty which remarks at the feeling of returning home.

Measured in miles and pubs

pass over the bittersweet foam.

then old adversaries step in

and shake too late. Time to shoot

then off to the market place

for just one more pint

of mixed before we split

as the last bus pulls out

to shouts of tek care me owd duck,

Another stand out poem is Bad Joke

It was calculated for impact.

To curb distraction, get a reaction,

wind you up off your death bed.

But it’s not good joking apart

to simply reminisce, take the piss,

pour it down the drain then point the blame

at someone else instead.

And there’s no point now in asking

if you want another one for the road

ahead your journey into the unknown,

We’re all well: over the limit, fed,

and soiled. We all want what’s best

for you, for us, for happiness and wealth,

so all I can do is drink to your ill-health,

write another poem you’d have despised

and wait it out until your demise.

Robin Cowpertwait lives in Devon, UK. His poems and short stories have been published in South Magazine, Candelabrum, Cynic Magazine and The Ofi Press Magazine. He is the author of Pam Naps and has published a poetry collection titled Lineage. He is also a musician and painter.