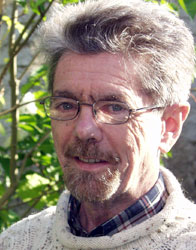 Marcus Cumberlege was born in Antibes (France) shortly before the war and migrated to Chelsea in the blitz, then to County Cork, Madrid, Peru, back to London, Paris and Connemara, before settling with his Flemish wife Maria in Bruges, Belgium in 1972.

He won a scholarship in English to Oxford, where he boxed and shot for the University, and later an Eric Gregory Award for 1966 (leading British poets under 30), adjudicated by Ted Hughes.

His first collection was published by Anvil Press Poetry of London in 1968. Twenty subsequent volumes have appeared in Belgium, including his SELECTED POEMS 1963-2009, published by Van de Wiele in 2010.

Marcus Cumberlege has written much in lyrical stanzas, but he is no stranger to prose poetry, cut-up, automatic writing, haiku, concrete and the extended line.

For nearly forty years he has been a familiar figure in Bruges, collaborating with poets, artists and musicians, organizing readings and encouraging the younger generation. He has a daughter, married and living in France.

Marcus has prepared a short BIOGRAPHY for inclusion in Selected Poems to be published in October 2010.

Interview carried out by email by Jack Little in February and March 2013. Published in The Ofi Press issue 28.

You have lived in many countries around the world throughout your life. How has this movement, change and sense of adventure affected your sense of identity?

For the last 40 years here in Bruges I have had a roof over my head and a caring partner. Living one moment at a time as I now do, each day is an adventure full of (mostly) pleasant surprises. Actually, it's a difficult question to answer in its totality for a 74 year-old born just before the war in Antibes, relocated to London during the blitz, educated at old fashioned English boarding schools, escaped to Spain (on a Lambretta) and Peru for 3 years (by boat), first married to a girl from Bombay and later dropping out for 2 years to Connemara.

Spiritually I have belonged for more than half my life to a Japanese school of Buddhism known as The Pure Land, whose nembutsu practice provides comforting answers to all my existential doubts. Rimbaud, Baudelaire, Lorca and the German Romantics (in their original languages) were the great passion of my teens, and without Keats, Dylan Thomas and Hopkins I might have given up my sense of being British altogether. At the age of 15 I wrote to T.S. Eliot about all this (even then I was suffering from the traumatic insomnia of the war years) only to hear from him that he was “no longer impressed by Rimbaud's Illuminations” and that I “ought to go to bed earlier”. I fell madly in love with Peru (where I lost my virginity) and later with Connemara and Maria, for whom I wrote the love lyrics in Firelines.

How did your travels and experiences in Latin America impact upon your poetry and life?

When we married 40 years ago I promised Maria I would take her to Latin America one day, and we finally made two spell-binding trips to Bolivia and Peru to stay with cousins and whirl around some of my old haunts. How can I answer your question in one page, Jack? TREMENDOUSLY!

I hit Peru at 18, a tender youth with a sheltered British education, who had hardly been allowed to speak to a girl and luckily been exempted from national service for asthma – to be exposed a) to the colonial life-style of my aunt and family b) to the bustle of Lima where I gave English lessons to people older than myself and c) to the shocking poverty amid the grandeur of its sierras and jungles (which finally drove me home again with a deep wound in my heart). The 3 years following at Oxford were, I am sorry to say, a washout. I had come back with the rancheras of Miguel Aceves Mejia and Jorge Negrete ringing in my soul, having discovered  Cesar Vallejo, one of the greatest. With Spanish jota and flamenco I now listen mostly to Mexican son. You cholos and chatas put fire in my blood. Starting with Ted Hughes, who sat on the panel which awarded me the Eric Gregory Prize in 1967, English establishment poetry went and still goes way over my head. Pucha! Give me the lyrics of Carlos Gardel any day!

Your time at Oxford University seems to have been, in part, a somewhat lonely and unfulfilling experience. To what extent do you think formal education can aid one in fulfilling one's potential in writing? Or are there other things that are perhaps more important?

My last two years at Sherborne School were a mine of poetic discovery and practice (I won the School Poetry Prize twice for my effeminate rhyming love lyrics). But after staying on a coffee plantation in the Peruvian jungle I felt a misfit amid the chattering crowd  of raw Oxford intellectuals, and quickly joined  a beer-drinking gang who helped turn me into an alcoholic, a gate-crasher and an opinionated snob with little taste for literature. In my three years at that place I attended one lecture, given by Professor Tolkien on Beowulf, the only subject I got as much as a B for in my finals. I led a mixed-up promiscuous sex life, never knowing or finding what I wanted. Milton was rammed down my throat. My glazed eyes perused thousands of pages of poetry and lit. crit. in order to write the prescribed weekly essays. Auden justly remarked that a budding poet would need 10 years to recover from the mauling of this meat-mincing machine. Was Dylan Thomas highly educated? I don't know, but very much doubt it.

Of all the many wonderful adventures you have had in your life, does one really stand out?

I wonder why you insist on calling me an adventurer, Jack? Since settling down to married life in Bruges 40 years ago, I have led a sedentary life, just uttering nembutsu and staying sober one day at a time. The great adventure happened just before that. I dropped out, eloping with my future wife Maria to Connemara, where we spent two years on the Atlantic seashore without electricity or running water. There I wrote my first and only novel, Houria, The Algerian Girl, rejected by Faber and Faber, the only publisher I submitted it to. This happened after the breakdown of my first marriage in Paris. Quite apart from sticking with me through all the ups and downs of alcoholism and manic depression, and nursing me through the adolescence of my lovely 46 year-old daughter, Maria has been in every way the perfect life's companion, and continues to inspire me. I was very fortunate to find her, and to hold on to her. She is a quilter and a librarian, and cooks divinely.

Before you found Buddhism, did you feel there was something missing from your spiritual life? Does the search, if that is the correct word, continue?

The search for greater balance, peace of mind, love and harmony in this unpredictable samsaric world certainly continues, for every day my ability to cope with “reality” and remain cheerful is challenged. A shortage of trust and self-confidence sometimes still rears its ugly head, while the typical shortcomings of resentment, fear, anger and loneliness are familiar bugaboos I've had to deal with now and then since getting sober 30 years ago. On the other hand, I think I know where I stand with respect to the afterlife: my birth in Amida's Land of Peace and Bliss is assured by my frequent daily recitation of the nembutsu. Namo Amida Butsu! Jadis, si je me souviens (Rimbaud), la vie était un festin . . . de confusion et de frustration – une lutte permanente. One of my major concerns now is “to feel good”, and Reflections In Water (2012) is entirely devoted to just that. I have written most of the existential angst (traumas of the war years?) out of my system. Before that I was a bundle of unresolved doubt.

After reading published biographies about you, your wife Maria appears to be clearly one of the most important people in your life. Without sounding mushy, what does love mean to you?

I agree with Byron and Rhonda Byrne (The Power) that life boils down to loving and being loved. God is love, I am God, I am love. Still, I doubt that I know more about it than the average street dog who is rescued and given a good home. I enjoy and am capable of giving it with much greater mutual satisfaction than in the past. Maria is indeed far and away the most important person in my life. Although I was abandoned by my father and mother, both long dead,  I now realize they desperately wanted me to be happy, and I am in a loving spiritual relationship with them both. Forgiveness and gratitude cannot be practised enough. I also love Bruges, and long to be back in my own bed after an absence of a week. I love my life, my daughter in France, my sister in Australia and my Latin American cousins. I thrive on sunshine and water. Buddhists talk more about compassion more than love, but Jesus knew a thing or two when he urged us to love those who hate us. I have one fabulous buddy and many soul-mates and am learning to live less with the intellect and more with the heart. I never watch football, begin to think of love more as a game than a competition.

Do you have a personal philosophy on life?

No. All I have learned about life has come from others. The Great Art, as I see it, is to feel good when you really feel bad. Friends are of far greater importance to me than fortune and a friend is someone I can be myself with, including myself. I am fond of telling myself what to think and do (and even more so of being completely empty-minded, as when washing up) and try very hard to practise what I preach. This is the training, outside is the match. Would that I surrendered more readily to Good Orderly Directions! Would that I were more aware of Other Power in all my decisions! As a matter of fact, I have gradually replaced philosophy by spiritual (religious??) practice, as recommended by the Seven Great Masters of Shin Buddhism and well documented by certain modern Japanese adepts.

Tell us about your work in promoting talented young poets in Bruges. Can we at the Ofi Press help?

Certainly you can! My efforts to befriend and encourage young Flemish poets with their work has always been an enjoyable and mutually enriching experience, but has not led to great things in terms of publishing.  One young man in particular seemed to me, with my imperfect ear, to have written some of the most exciting stuff in modern Flemish that I had read. But to tie him down and get him to see himself as the genius he is (he is constantly apologizing for his long silences) is like negotiating a minefield. I had more success by actually translating into English a young friend's book of children's verse which will probably be published in Dublin. The illustrations are wonderful, and I don't know whether my renderings would stand up without them. In the mid 70's already I was organizing successful poetry readings in cafés, and repeated these efforts at my place of work early in the last decade, but they tended to have an ephemeral impact. Half a dozen poets now come together once a month to read their work: the problem for the Ofi Press is that most of it is in Dutch.  Now that you and I are beginning to communicate regularly, I will see how things evolve and whether the local talent can be persuaded to contribute.