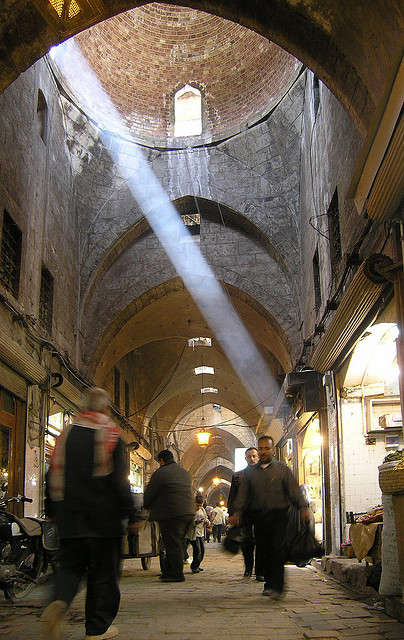 Published in issue 37 of The Ofi Press.

I feel like I should speak of the city

I feel like I should speak of the city. Of its roads, alleys, streets and shops that assembled in line with their bumpy stoned paths that strike reflexology pulses into feet.

Of the castle that never sleeps keeping lovers near it, tattooed to its heals, of coffee shops that strike laughter into ears on each card played, each tea glass Din Din on the table and each ringing phone as heads turn towards passing beauties.

It is the city, where sellers of cakes roll their chariots and shout, ‘move before I strike your belly’.

Of the barbers who roll strings on fingers threading pulling and pushing back and forth unplucking hairs as they wave to passers Assalamu Alaikum .

Of the children on Eid and their colourful clothing; toy pistol guns; polished shoes; tiny fingers and bom bom they shoot and run to feast.

And the Arabian sweets, and Konafah[i], and Kobbah[ii], and vein leafs and Shawrma combined with Hummus then melting into the hands of taxi drivers as they swing their Tasbih[iii] and utter ‘ولح يا رايح وين’[iv].

The veg sellers and mountains of tomatoes, mandarins, apples and the red blood like halved fig next to dangling bananas,

All near smoothies’ sellers with their mixers non-stop and their boys collecting money, flipping 25 Syrian lira in the air landing it in their pockets.

Yes, it is the city and its trees, the leafs, the roundabouts in it and the smell of dropping gas on them as they mix with hot summer burning Middle Eastern sun.

The beauty of girls as they speak, catwalk, adjust their yashmaks, remove their anklets, smell their lovers tissues, cry as they nudge one another sheepishly and point out cute boys they promised to.

It is the shining marble at Le Meridian hotel that has stripes of gold reflecting giant chandelier above as I move my head back and forth it gets closer and further from me.

The narrative of mothers, lecturing fathers, cruelty of brothers, loving sisters, emotional lecturers all as they gather around a giant Ramadan banquets.

Of lentil soup as it strikes hot smoke into the eyeballs of those who love it most and of air blow into spoonful of hot boiled sage before giving it to babies.

And the long queues in Aleppo central park for weekenders to buy boiled corns, spray them salt, take the first bite and spit it, ‘oh it’s too hot’.

Of the ticketing offices and their touch me not secretaries who head hunt tourists with their dark, brown, smooth, firm offices’ desks.

Of each corner, each turn, each give and take haggling in bazars and each wool seller in the medina as he mixes red with green over blue on white to attract the veiled eyes of his lover.

And of old men and their wrinkled hands as they place one over another, close their eyes and pray at Zakrya Mosque loosing themselves in spirituality.

I speak of Aleppo City.

[i] A type of Arabian sweet, mainly known in the east Mediterranean region of the Arab world.

[ii] An Arabian dish (made of wheat stuffed with mean, walnuts, spices etc) strongly connected to the city Aleppo.

[iii] Tasbih (تسبيح) is a form of dhikr that involves the repetitive utterances of short sentences glorifying God, in Islam. To keep track of counting either the phalanges of the right hand or a misbaha is used.

[iv] An expression used by Aleppo taxi drivers, translates; ‘where you going love’.

Amir Darwish was born and raised in Syria until the age of 17. In 2002 he moved to the United Kingdom where he became a tri-lingual interpreter and poet. He studied history at Teesside University and recently received an acceptance to commence a postgraduate course in international studies at Durham University, United Kingdom, which will start in September 2014. He will participate in the Teesside Poetry Festival this summer.

Image: "The Souk, Allepo" by Seier+Seier.