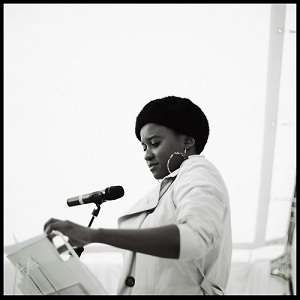 Born in 1981 in Gaborone, Botswana, TJ Dema is a spoken word poet who runs Sauti Arts and Performance Management and is chair of the Writers Association of Botswana. She took part in the 2005-06 British Council and Lancaster University’s Crossing Borders project, which gave her the opportunity to read at various festivals and other literary gatherings, such as the Cambridge Seminar on Contemporary Literature and Johannesburg Arts Alive. She has performed in many countries, including France, Denmark, India, South Africa, Malawi and Zimbabwe. A selection of her poetry has been translated into Chinese. She has recently recorded 12 Botswana poets on a multilingual CD, Dreaming Is A Gift For Me.

Interview carried out by email by Jack Little in August 2012. Featured in Issue 22.

1.Does heritage have a part to play in your poetry and performance? Please explain.

Yes in some ways. The fact that I am drawn to oral poetry or performance poetry is very much coded into Batswana’s artistic DNA, traditionally our poets did not write down their poems and often composed them on the spot and definitely always delivered them live to an audience. But I write primarily in English and roam between themes while they wrote in Setswana and tended to focus only on subjects that affected the tribe as a whole such as the chief’s coronation, the return of regiments, rain, war rather than individual love or loss etc

2. You have travelled widely throughout the world. What has this added to your poetry?

I heard one poet speak of writing out of the context of the physical space you are in and I am beginning to realize that a number of what I think of as my Botswana poems where actually penned when I was elsewhere thinking of/missing home. So that is one thing that has come of travelling but in addition to that I come from a sparsely populated country which only  has two million people. You can imagine that the arts community here is very small and geographically distant from one another and when I travel it is usually to gatherings which are densely populated, by virtue of them being festivals or whatever, with all kinds of writers and poets and artists and this is one of the few times I don’t think I’m crazy for choosing this path or not ignoring it when it came calling.

3. What does being a poet mean for you?

Traditionally in Botswana the poet had artistic immunity, a kind of license to speak without fear or favour he could tell off the chief and still close the poem by asking for a gift which he usually received in the form of a cow. I continue to naively assume this imperviousness as every poet’s privilege and so for me a poet is one who is  be able to say that which might otherwise remain unspoken for whatever reason, but it also means being able to have fun with language beyond just its political or prosaic use. I rather think of good prose as thoroughbreds in a well constructed stable and poetry especially spokenword as mustangs running wild in a fantastic field somewhere. This is not to imply that writing poetry isn’t work, of course it is that’s just the image that always comes to mind for me. I was raised to believe that as a matter of survival if you have a gift you try and hone it into a skill.

4. What does cross cultural conversation mean to you?

Dialogue beyond borders – human, geographical or sometimes social borders within the same space. I think of any conversation as an opportunity to learn something new or to shift perspectives to accommodate that which you may not necessarily have the facility to instinctively understand or relate to.

5. Please tell us more about your work in promoting Botswana’s culture. Would you be interested in beginning a project or conversation linking poets from Mexico and your country?

It’s not, I think, entirely an altruistic enterprise to draw attention to the space one is from, I run a small company which represents a select number of contemporary and traditional poets, vocalists as well as instrumentalists and we take care of their publicity, bookings and perhaps most importantly try to guide their artistic development. Beyond this I was part of a group of young artists who founded a poetry collective a decade ago that hosted open mics and an annual festival which brought poets from other countries to Botswana to share ideas and space. Much recently I’ve begun to conceptualise or edit collections the first being a CD featuring 12 Batswana poets released in 2011 and while I was chairperson of the Writers Association of Botswana I co-edited its 30th anniversary journal with two of my favourite Batswana authors Lauri Kubuitsile and Wame Molefhe. A project due for release later this year is a collaboration with a US journal.

In answer to the question of a Mexico –Botswana collaboration that’s easy, yes definitely sign me up.

6. What does the future hold for TJ Dema?

All things constant an extended writing related trip to the United States is in the cards for later this year but without jinxing anything going forward I’m much more focused on facilitating opportunities to document writing or performance by myself and other Batswana through recordings and publications.