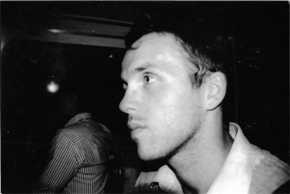 Jack Little (b. 1987, London) is a British-Mexican writer, translator and teacher who started The Ofi Press firstly to have an excuse to contact his favourite writers from around the world and also as a means to give exposure to young Mexican writers by publishing their work in both English and Spanish.

After graduating from Durham University in 2009, Jack left his spiritual home of Newcastle to live in the buzzing metropolis of Mexico City. He has lived there for seven years working as an editor of school books, sports coach and teacher. His claim to fame was representing the national Mexico cricket team during two tours of Central America.

Since arriving to Mexico, Jack completed a creative writing course at the UNAM, finished his PGCE through Buckingham University with an "outstanding" grade, completed an A-level in Spanish and graduated with an MA in Education. He is a founding member of the Mexico City International Writers' Circle which ran from 2012-2014, a small writers' collective which came out of the Ofi Press Poetry Nights. Since 2013, he has been married to a wonderful lady from Mexico City. He has been a naturalised Mexican since December 2015 and holds dual British-Mexican citizenship.

Jack lived in Palma de Mallorca in Spain for a year between the summers of 2016 and 2017 but recently moved back to Mexico City where he is currently applying to local universities to hopefully study for a PhD in the field of Education.

Between 2011 and 2013 he wrote a regular column for The Bubble Magazine on Mexican culture and also blogged for the Conversations Across Borders project. In October 2013, Jack began blogging for Wasafiri Magazine. He was a runner up in the Bubble Creative Writing Competition in March 2013, took 1st prize in the Titchfield Shakespeare Festival poetry contest in September 2013 and was highly commended in the Black Country Living Museum Poetry Competition in 2013. In March 2012, Jack read at the Linares Literary Festival in Nuevo Leon, Mexico and in the XV International Book Fair in the Zócalo in Mexico City in 2015. He has published an educational article on Student Led Conferences through the IB blog, "Sharing the PYP" and is a Certified Google Educator. Jack was poet in residence at the Heinrich Boll Cottage on Achill Island in Ireland in July 2016.