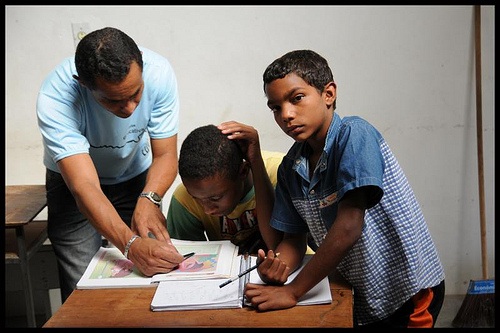 Education is an increasing necessity for individuals to have on their resumes to enter the work force. The problem with education is that many students do not get the opportunity to receive a college diploma because of their undocumented status in the United States. In many cases there are students who do get the opportunity to receive a diploma, but are unable to work after graduation. This discourages students who are in high school and college, which results in an increase in dropouts across the United States. Latino students have the greatest dropout rate, and even though it has decreased in the past couple of years it is still a problem. According to Hill and Torres, “The National Assessment of Educational Progress (NAEP) statistics, [calculated that] with the highest dropout rate, only 64% of Latino 18- 24-year-olds have completed high school” (96). In the college perspective “A survey of students who entered college in 1989, conducted by the National Center for Education Statistics, found that those whose parents had a high-school diploma but not a college degree were almost twice as likely to drop out (44 per cent) as those whose parents did have a college degree (24 per cent)” (Reisberg 1). The dropout rate issue is spreading across social media, causing debates on what solutions can be made to solve these problems. Solutions that include: Mexican American studies courses in the school curriculum, and social support for Latinos on education. The responsibility not only belongs to the government, but to Latinos because “they have the most to gain and the most lose” (Aguilar 98).

The dropout rate upon Latinos can be decreased, but the question is how? One solution is implementing Mexican-American studies courses in the high school and college curriculum. Having these courses will encourage Latino students to know more about their cultures history, customs, and heritage. According to Tu Decides You Decide Bilingual Newspaper, “Benefits that past students of Chicano study courses have shown: A rise is self-esteem, A stronger feeling of belonging in society, More success in school, [and] A higher pursuit for education” (Goveia). Mexican-American studies offers a different perspective in history, which includes the Chicano movement of the 1960’s and 1970’s. Arturo Amaro-Aguilar, author of Introduction to Mexican American Studies: Story of Aztlan and La Raza states, “The Chicano Movement was a movement to promote change in society” (85). If Latino students are given the opportunity to study their own culture they too can make a change in society. Studying these courses will not only decrease dropout rates, but also give them the chance to live the American Dream. Everyone is equal in this country and getting an education is important for La Raza.

Latino students need motivation to succeed in school, but social support must be present to achieve this goal. A study was performed by “Schneider and Ward (2003) [where they] assessed the perceived social support of 35 Latino college students and concluded that if universities increase support from parents, teachers, and peers there might be a significant increase in Latino students' college adjustment” (Adena, Gail, Melissa, and Jeremy 155).  Social support is difficult for Latino students to have because of their low income level in society. It is negatively affecting them, and is causing other generations to fall in the same category. According to Adena, Gail, Melissa and Jeremy “What leads to the stagnation of graduation rates for African Americans and Hispanic Americans? Hauser and Anderson (1991) explained this phenomenon by pointing to lower income levels in minority families, which place minorities at a disadvantage. Pintrich and Schunk (2002) claimed low [socioeconomic status] (SES) does not cause decreased academic motivation, but the factors tied with SES negatively impact academic motivation” (156). Latino students are not the reason why graduation rates have decreased. It is their environment, and what type of schools they go to that is causing such chaos. The Latino communities must come together to support their children who are struggling to receive an education to have a better life. Porque la familia es todo.

Education is power and is the key for social movement for Latinos in the United States. This can have a major improvement on the socioeconomic and social status for Latino communities. In order for this to occur, Mexican-American studies and social support in education must be present. It will bring pride, honor and respect to the la cultura of Latinos who have struggled enough in the course of history. These same struggles have made them stronger and have survived to keep moving forward. Education is vitally important. Education is power!

Hill, Nancy E., and Kathryn Torres. "Negotiating The American Dream: The Paradox Of Aspirations And Achievement Among Latino Students And Engagement Between Their Families And Schools." Journal Of Social Issues 66.1 (2010): 95-112.Web. 21 Dec. 2013.

Fernando Rafael Izaguirre, Jr., is a sophomore at Lee College in Baytown, Texas, majoring in English, Humanities, and Mexican American studies. He will graduate with the Honors program in the year 2015 with three associate degrees. Inducted into Phi Theta Kappa Honors Chapter this spring, Fernando has been given many opportunities, such as presenting poetry at the National Undergraduate Literature Conference (NULC) in Ogden, Utah. His work has appeared in the Red Fez Magazine, Metaphor, Baytown Sun, OnPoint Magazine and Somos en Escrito. He currently spends his time reading and writing until he falls asleep in the middle of the night.