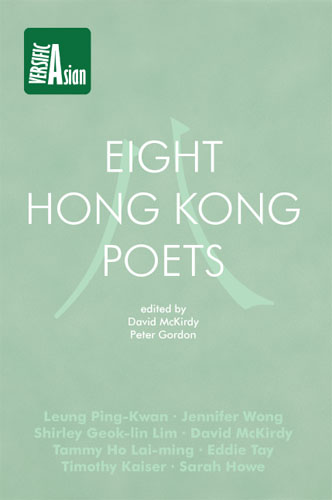 EIGHT HONG KONG POETS is an anthology of eight varied poets, from the revered Leung Ping-kwan to the young poets Jennifer Wong and Sarah Howe. Some poems in the volume are steeped in tradition; some speak from an immigrant/ emigrant view, with multi-national experiences; some are academic in feel; some are written to the rhythm of a young heart beating on the streets of this 21st century city.

As an outsider, I read the volume as an introduction to a place. Hong Kong is not a city I’m personally acquainted with, and so I rely on image and words to show the way. Up to now, my most direct contact to the city has been through poet Nicolette Wong, editor of A Minor Press and A Minor Magazine, whose translation of Tang Siu Wa’s poem Trek was featured at the Asian American Writers Workshop, in relation to Umbrella Movement (a recent Ofi Press Magazine feature with Wong can be viewed here). In this volume, I expected poetry that would paint the city for me, in all its layers. I looked for street scenes and raucous noises, smells and sounds and voices that would situate me physically and emotionally. I expected views across the architectural landscape, references to Hong Kong’s complicated history, stories of cross-cultural family ties. I got all that, and more.

The more I thought about it, the more I started to view this collection as a companion reader for someone who likes to travel, for someone who has only imagined this city. It’s not a real guide, of course: there is no fold-out map, and no one holding an umbrella guides me through the winding streets, from site to site – though there are umbrellas; it’s Hong Kong, after all. But it’s a guide nonetheless; in these poems I wandered through dark nighttime alleys and wide day-lit streets, colonial buildings and skyscrapers, the Star Ferry Clock Tower and the Whampa Dock Company. I saw red lanterns swaying and heard teak decks sighing. I admired things evoking tradition and history – lotus roots and cherry trees – and noted things butting up against those images – McDonalds and cigarettes, churning buses and fleeting sandaled feet. In these poems I smelled wetmarkets and listened to the whistling wind; I tasted peeled ginger and tangerines, and I peered at deftly sketched calligraphy. I glimpsed a reverence for tradition and history, and saw the doors flung open as protest marched in.

In a collection of this variety, it is impossible to write a review that covers all the complexities and poetic backgrounds/ voices. For now, let me mention poems whose fullness extends well beyond the page. I include here a poem by each poet in the anthology that feels, to me, like it tells something exemplary about the city and its people.

Leung Pink-kwan’s Ladder Street, a poem with magic and shadows and the moon, plus the sound of clogs and a jump-rope song, and the line “Memory is like scissors” – and an ending I shall not soon forget:

Why can’t one make appointments with bygone voices?

“Tomorrow at ten? wear the clogs; I’ll hear you then.”

Eddie Tay’s A Second Language, opening with the lament “But I have never read proverbs on bamboo” and then taking  us through his connection to the past, to his Grandfather’s face, examining themes of history and language as he struggles to imitate the melodies of Mandarin.

Timothy Kaiser’s my father-in-law at twenty, taking a photographic look at a man and his life, the way the shadowy black-and-white snapshots capture the essence of handsome, and the fire and spice of the fight of youth, and the memory of beauty in a cloud of cigarette smoke and coughing lungs.

Tammy Ho Lai-ming’s Languages, exploring the complexities and assumptions that come with language learning, both natural and scholarly, and the accompanying pride and/or baggage that cannot be escaped.

Shirley Geok-lin Lim’s MTR lines, which suggests a whole set of themes, and a brief glimpse of dreams, in the moments on the metro, just before the doors open and everything changes.

Sara Howe’s Islands, a meandering poem that moves from a young girl reaching for her roots in boarding school to myths and mooncakes, to mother and father and family secrets locked away across oceans.

David McKirdy’s Star Struck, connecting the history of shipwrights to the commercialism of t-shirt tours and moving in one swift moment to politics and protests, and ending with a soft demand:

Because this is a review, I will mention here that I found some poems in the volume not as memorable as others. Some poems rely too much on a snappy ending; some do not satisfy. McKirdy’s We Chinese and Shirley Geok-lin Lim’s A Kind of Paradise both feel like hints that do not go far enough. Jennifer Wong’s En Route captures a fleeting moment but little more, even as it suggests a large-scale longing in the last line. Timothy Kaiser’s minute Statues pales compared to girl on the bus (which remains long after the girl, with her contorted face, and the narrator have stepped off the bus, and I’ve moved on, too). And Tammy Ho Lai-ming’s Newest, hottest, tallest, the most London paints a liaison on the brink of something else, perhaps, but feels slim compared to, for example, His t-shirts, which starts with surface observations but quickly becomes much more.

But it is an inevitable outcome that one reader will prefer some poems over others. My list of eight exemplary poems could have been sixteen, or twenty-four, and may well change by tomorrow. And so, let me end by returning to the idea that this may be viewed as an excellent traveller’s companion. I found myself content that the poems work as a whole, introducing me to a world I have yet to see and experience.

My introduction to Asia came as I recently spent two years in Indonesia, Malaysia and Thailand. Hong Kong has long been one of those places I’d like to get to. But I’m a slow traveler and it will be some time before I find myself in that fragrant harbor. When I eventually land there, I’ll be sure to bring this anthology along. Till then, I’ll carry Leung Ping-kwan’s Postcards of Old Hong Kong in my pocket, and think on these closing lines, no matter where I am:

How do us, on gaudy pictures of the past

Writer words of the moment? Stuck in their midst, how we paint ourselves?