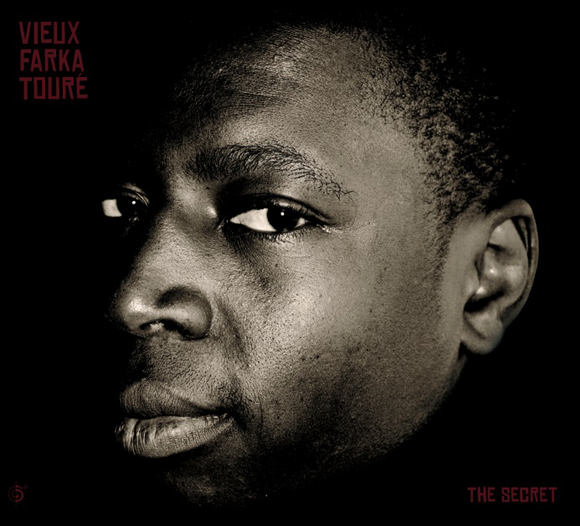 Often referred to as “The Hendrix of the Sahara”, Vieux Farka Toure was born in Niafunké, Mali in 1981. He is the son of legendary Malian guitar player Ali Farka Toure, who died in 2006.

Vieux was initially a drummer / calabash player at Mali’s Institut National des Arts, but secretly began playing guitar in 2001. Ali Farka Touré was weakened with cancer when Vieux announced that he was going to record an album. Ali recorded a couple of tracks with him, and these recordings, which can be heard on Vieux’s debut CD, were amongst his final ones. It has been said that the senior Touré played rough mixes of these songs when people visited him in his final days, at peace with, and proud of, his son’s talent as a musician.

In June 2010, Vieux performed at the opening concert for the FIFA World Cup in South Africa. That month Vieux also released his first live album, LIVE. His live performances are highly energized and Vieux is known for dazzling crowds with his speed and dexterity on the guitar, as well as his palpable charisma and luminous smile, both of which captivate audiences from all audiences in spite of any language barriers (though Vieux does speak 8 languages).

In April 2012, Vieux released The Tel Aviv Session (Cumbancha), a collaborative project with Israeli superstar Idan Raichel dubbed ‘The Toure-Raichel Collective’ that has been hailed by fans and critics alike as a masterpiece and one of the best collaborative albums in the history of international music, drawing comparisons to Ali Farka Toure and Ry Cooder’s legendary Talking Timbuktu album. With each new project, Vieux expands his horizons, embraces new challenges and further entrenches his reputation as one of the world’s most talented and innovative musicians. Vieux has released five albums. You can find out more about his work here:

Interview carried out online by Jack Little in June 2012.

1.       What do you see as the future of the human race in one hundred years? Are you optimistic?

(Laughs).  One hundred years?!  Im thinking about this year, maybe next year.  I am not a genie, I am a guitarist!  Haha.  But in all seriousness, I think everything around us changes but we, people, we always stay the same throughout history.  So I think in 100 years our technology will be incredible to us now but people will have much of the same problems.

I am now in Santa Cruze - it's nice, a very beautiful place.  Its nice weather here, relaxed, no stress.  Im just in my hotel and the TV is on.  Im trying to find a good action movie.

Ahh, that was the birth of my daughter Hawa.  She is now almost two years old.  Everything I do is for her and for our family.

There are some diabolic old recordings from the north of Mali and from Niger. That is the deepest music in the world.  Also the spike fiddle that my father used to play -- the one-string violin.  That summons the spirits in the Niger river.  That is very real and very powerful.  It makes me tremble.