The Way The Money Goes 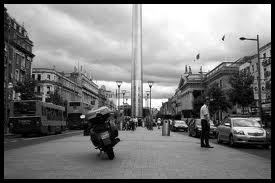 The taxi turned into Clare Street and a twisting breeze.  Leaves, discarded bus tickets and pieces of newspaper danced in front of the windscreen.  “Jesus, that was a twenty euro note I’m sure of it” said the musician passenger.  “Yeah” said the driver gruffly, “but if you jump out to get it now it’ll cost you a lot more in hospital bills.  Look at the traffic behind...”

The musician normally didn’t stay long when his gig was finished.  He left quickly to get a taxi while the rest of the band stayed on to have a drink or two.

The twenty euro went with the wind and was forced to hover briefly above a kissing couple.  The same wind that had held it up took hold of the tinted hair of the woman and whisked it through the half open fingers of the man, twisting and turning. The man had met her that night at the musician’s gig.  She was French and as they watched the musicians he was able to explain all the tunes and instruments and songs.

The musicians were used to this. They were glued to their instruments all night and had to play to the “death”.  In the middle of a tune or a song you would make longer than normal eye contact with a beautiful woman.  “I’m on to something here” you thought.  Then from out of nowhere came the “Great Authority” on Irish music.  He engaged her in conversation and probably even gave her your name and musical pedigree.  As the night drew to a close inevitably you’d see his arm going round her shoulder and that was the end of that. What could you do?  All is fair in love etc.  “He probably wouldn’t know a bar of music from a bar of soap” was your final thought as you watched them leave together.

The Twenty was moved on by the wind which smashed it into the road near the very building that housed the Irish Government in Merrion Square and pinned it to the kerb. A drunk passing by the gate bade goodnight to the policeman who peered out from his wooden hut and returned the compliment.

The drunk had left his house at ten that morning to buy milk and a paper.  He had every intention of going straight home. “Just one” he had thought.  He always had every intention of going straight home. One thing though always led to another.  He would walk home now and save the taxi fare.  Tomorrow was Sunday.  The family would be asleep when he got home.  He hated Sundays.  She would ignore him again.

The policeman went back to his newspaper which was ruffled every so often by the swirling breeze and at one stage nearly ended up on the street.  He folded it almost in a ball and put it on the floor.  His mind was elsewhere anyway.  Their first holiday with the baby next week. Just down to Kerry. Quietness.

Just up from O’Donoghue’s pub near Stephen’s Green a man lay in a doorway wrapped in a blue sleeping bag.  He didn’t zip it up because if you were attacked you had to get away fast and the zip was a hindrance if you were kicked.  You couldn’t move.

Across the road there was a long row of taxis holding up yellow signs with black writing that made them look like a swarm of wasps.  A young man strode by the sleeping bag and was just about to cross the road to get a taxi when he saw a twenty euro note blowing along the road.  He trapped it with his right foot at the second attempt.

He hopped into the cab.  “Jesus” he said to the driver, “I just found a twenty euro note across the road. Take me to Cabra and I’ll give you the change”.

“Funny” said the driver, “That’s the second twenty I’ve come across on the road tonight.  Somebody must be throwing them away”.

Mick Fitzgerald of Dublin, Ireland, receives GMA’s Award of Merit for his children's recording, The Enchanted Lake; Irish Legends, Stories and Harp Music, and as vocalist. The stories on this album were chosen and edited by Gabriele Haefs and features Nadia Birkenstock on harp. Recently Fitzgerald published his solo CD, Streetwise, and is working with Haefs on a book with stories about Irish music. http://www.the-enchanted-lake.com