Published in Issue 28 of The Ofi Press. 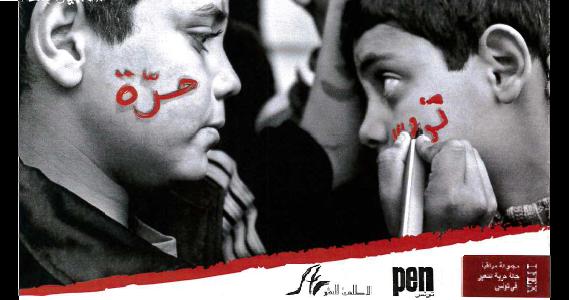 You can read the original text in Arabic here .

“…The new Tunisia with its new freedoms is facing today new dangers to freedom, and especially to freedom of expression. So will the ideas of its creators succeed to overcome the bars once and for all, or is it a matter of fate that Tunisia and its creators will remain fighting religious extremism like they fought the police dictatorship?…”

With this note, Naziha Rajiba (also known as Om Zied) concluded her introduction to the book Fugitive Ideas published by Al Attlassia in an elegant design, in 141 pages, and including a bunch of older texts “written at the time of repression, and which led its writers to prisons, hiding, and isolation, and newer texts analysing the new reality with its advantages and shortcomings that blossomed in Tunisia.”

These selections of texts and pictures were gathered and published by Tunisia Monitoring Group, emanating from the Global network IFEX, which began in 2004, prior to the World Summit on the Information Society (WSIS), to support the activists of freedom of expression in Tunisia who were severely repressed due to their activities during the Summit, aiming to draw the attention of the world to the flagrant contradiction between Tunisia hosting such a Summit and the violations of freedoms in general, and the freedom of expression in particular by the Ben Ali regime.

Because the Arab Spring that began in Tunisia did not come ex nihilo, the aim of publishing this book is placed within the context of the celebration of the Tunisian revolution and its new freedoms, honouring activists, writers, and photographers who resisted censorship and who sought to go beyond the restrictions.

This book or anthology included a text published in January 1988 by Naziha Rajiba (also known as Om Zied) titled “Dissonance” which led to the stopping of the newspaper Arrai (The Opinion). Besides, the author of this daring article was exposed to constant harassment by the regime of Ben Ali, and perpetual surveillance by the police services.

It also included a text titled “The Revolution, and Beyond” by Jalloul Azzouna, the first prisoner of opinion (1989) in the era of Ben Ali. He was sentenced to one year in prison for touching the dignity of the Head of State, and was released after some months thanks to a presidential pardon.

Sihem Bensedrine is among the contributors to this anthology. She is a journalist and activist who worked for more than 20 years to denounce the violations of human rights in Tunisia, and to defend the freedom of expression under the authoritarian rule of President Ben Ali. She had been subjected to campaigns of slander, her properties were confiscated, and her relatives, and even her children were persecuted and pursued. She was imprisoned in 2001.

Under the title of “The Abu Ghraib of Iraq and the Father of Oddities of Tunisia” (There is a pun in the Arabic title) you find an article by Mohammed Abbou, a lawyer famous for his defense of human rights and as a founding member of the International Association for the Support of Political Prisoners.

He was arrested in 2005, and sentenced to five years in prison due to an article titled “Ben Ali Sharon” that he published in which he unveiled the corruption of the Ben Ali family and the judicial and police systems in Tunisia. He was released after spending two years and a half as an isolated prisoner, and he lately was given the position of Minister in charge of Administrative Reform in the government formed after the elections of October 2011.

This anthology which is a good initiative will be translated into French and English, and before being translated would that it had published in a second edition including the addition of other writers, poets, novelists, filmmakers, musicians, painters and intellectuals from Tunisia whose works included the harbingers of the revolution, the denouncement of repression and the yearning for freedom!