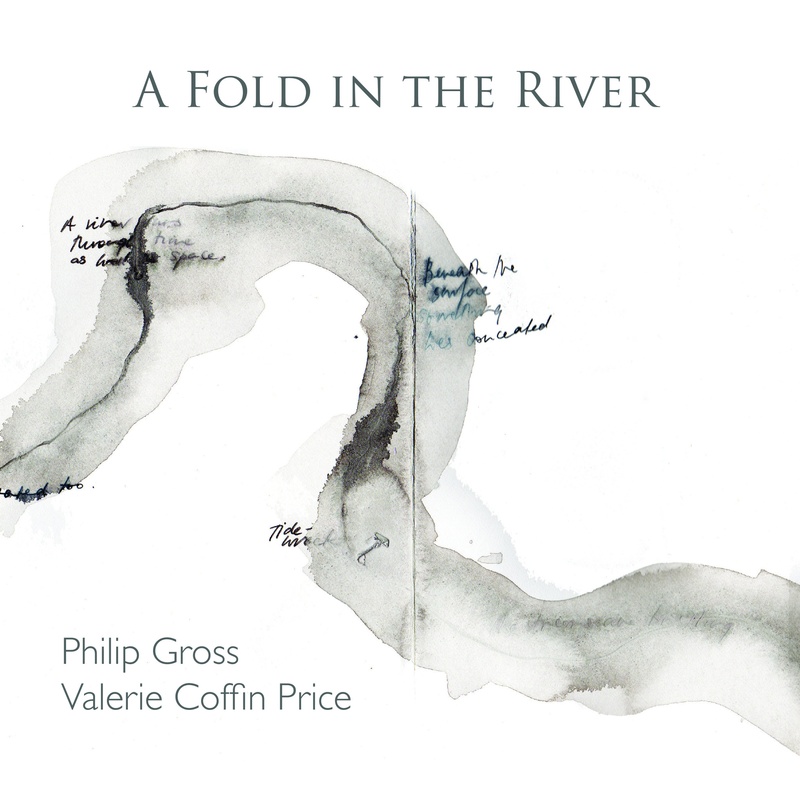 Published in The Ofi Press issue 44.

A Fold in the River, by Philip Gross and Valerie Coffin Price, is a delicate, beautiful meditation on the nature of the river Taff, and on the poet’s very human responses to it. When Philip Gross moved to Quakers Yard he became enamoured with the Welsh river and he recorded his walks along its banks in his journal. Eventually, these entries distilled into poems which he showed to the artist Valerie Coffin Price. She responded to art as artists do and began creating paintings to go along with the text. The result is a collection that could feel at home in a museum, or spread open on a coffee table.

The poetry is slow, languorous, and it reads very naturally, like something that has always been on earth. Reading it is a bit like stepping off of a grassy bank and into a slow currant. It feels good, but you have to be in the mood for it. Gross is an adept at capturing the sensations of the natural world. Besides gently echoing Wallace Stevens’ poem about blackbirds, the poem ‘Five Takes on the Taff’ provides a panoramic view of the waterscape as a whole. One stanza reads:

a tree that grows inwards

from the tips of its twigs,

it finds itself, its others;

finds itself a trunk, a place

to stand, this thing that cant

a foot on the ground,

at last, that turns out

The stanzas of this poem are arranged laterally, around an abstract map of the river which Valerie Coffin Price painted by blurring lines of sepia ink over part-obscured text. The map is laid against a stark-white background, and the effect is at once, paradoxically, calm and startling.

In this book, the river has become a character. It has desires, wants; and so do the things and creatures that inhabit its banks. In ‘The house wants to go back…’ we are presented with the image of a human structure, wrenched from the environment and put to use, longing to return to its original state. This house acts:

wearied, with its lime leeched out

by rising damp and time

that trickles away, leaving nubs

The house gains life through its own decay, becomes more real as it rots out of service. For all the seeming-languor of the riverbank, the river is an agent of change.

This propensity for creative destruction is made visible in the prose-poem, ‘…Brief And Marginal’. In it, the things which seem the most solid are really the most likely to explode into some new and different form:


land of a flood beach, no visible soil. The scoured stones say it

all: quick river; uppity river, wham bam and off, no silt-idling here. And yet all this grows:

balsam, naturally, a new kid on the blocks, on the stones – pink root-clumps casting

round to find a purchase – so easily snapped, a stalk is just a column of crisp water, scented

There is no painting on this page, but the two-pages before bear an untitled watercolour of a riverbank in cool shades of green and gray, with the words ‘The river is / a species of fire / a tree that grows inward / a mere circumstance’ printed in faint ink, by an old-fashioned typewriter. While both the poems and the paintings are more than good enough to stand on their own, the two forms are immeasurably stronger together. They brought me a great deal of pleasure.

It has been a long time since I’ve seen a book whose art and words react so well, so naturally together. This book reads like something that formed naturally. It provides the same sort of sensory satisfaction as a perfectly-smooth river-rock; curved and soft-textured, but with a lot of heft. The artifice is of such a high level that it is nearly invisible. It reads like a thing that should be, not like something that is because it was forced. The word for this is ‘healing’. A Fold in the River is a break from the world.