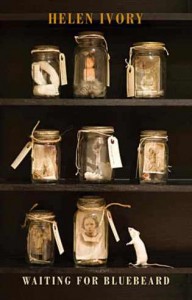 Helen Ivory’s wonderful collection makes me think of the Mexican Surrealist artist Leonora Carrington. Both take risks in their work:  domestic objects and situations  which at first seem so recognisable reveal parallel dimensions both magical and haunting. Women with the heads of birds live in worlds of five pound notes and calamine, ‘somewhere beyond weather’ where rules of space and time do not apply.

The results are heady and disorienting. Helen Ivory’s imaginative universe ‘plays tricks with gravity’, as her first poem asserts. The two-headed ‘she’ who is also ‘I’ exchanges one nightmarish containment for another as she moves from the family home as child/daughter to living in Bluebeard’s house: and this male ‘other’ is a new, fractured reflection of the distant and troubling father. Though Bluebeard and the father both appear to embody aspects of a destructive masculinity which is inarticulate and violent (Bluebeard’s snaring and killing of small animals such as rabbits reminds me of a specific masculinity evoked by Plath in her last furious poems) they are also pitiful and inadequate…all that the father makes – sketches, a shed, her dress – somehow do not do. Yet there is a tenderness underlying Ivory’s cool-headed appraisal of these melancholy figures made hollow by their unconscious acceptance of patriarchal roles. Ultimately it is the ability to transform and to shed skins which distinguishes the girl/woman from them: they cannot change, but she is a shape-shifter, able to leave the house ‘naked’, even at a terrible cost – walking ‘into the fire/so he could not give me his love’ as the collection ends, very movingly.

This is a collection which gathers power with re-reading and some poems acquire a kind of shamanic quality. There is so much a review could include – I was particularly intrigued by the imagery of containment (the filled jars on the cover are a dream-like metaphor) -  also skin, with its  understated sexuality of unzippings; and equally by the evocation of the house as an equivalent to the female self, which  made me think of the work of another artist, Louise Bourgeois. I haven’t even begun with the mother and the grandmother! Helen Ivory is an artist as well as a poet and a rich, strange visual imagination brings added layers and surprises to her written work. She is definitely one of the Surrealist sisters. A collection not to be missed!