In 1941, [Fritz Kreisler] was struck by a truck in Manhattan. He recovered after days in a coma, but for a time forgot all modern languages and could speak only Latin and Greek.

One hand cocks the hammer of a .45, another 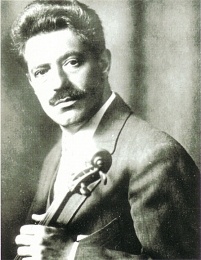 resigned to – as those Wild West towns

demanded their fiddle at gun point;

his ammo for the tales he’d tell

to hell by traffic on the staves he had to cross,

he missed the one crescendo his notation

didn't show: the milk truck come to knock him

down and out, a floater in the corner of the eye

he opened once again to struggle back

to consciousness, some notion of identity,

to words his mouth still recognised

across the ward, to no response, if empty looks

don't count.  They realised, of course:

the coma left him Latin, Greek but wiped

the rest.  Awake, he spoke in tongues,

the grammar of the quad.  But had his fingers

done the talking, they'd have made it plain:

their memories intact.  One hand

cocks the violin bow, the other rests

on the strings; coercion, armed or otherwise,

long gone. This speech is vivid and melodic,

tuned to accents of his own.  To this

they can respond.  The words?  They come back

he might remember from the barrel of a gun.

Brian Johnstone is a Scottish poet, writer and performer whose work has appeared throughout Scotland, elsewhere in the UK, in North America and Europe. He has published six collections, most recently Dry Stone Work (Arc, 2014). In 2015 his work appeared on the UK’s Poetry Archive website. His poems have been translated into over a dozen languages; in 2009 Terra Incognita, a chapbook in Italian translation, was published by L’Officina (Vicenza). A founder and former Director of StAnza: Scotland’s International Poetry Festival, he has appeared at various poetry festivals, from Macedonia to Nicaragua, and at numerous venues across the UK. http://brianjohnstonepoet.co.uk/