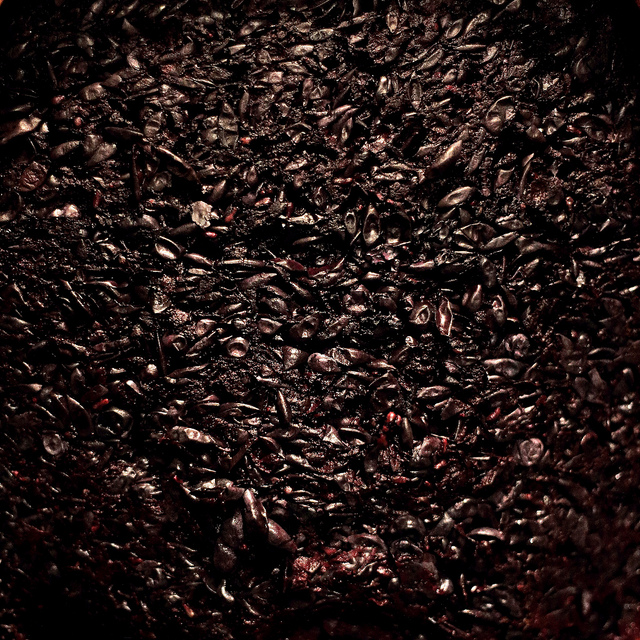 Trodden by the pure white feet of girls

legs red to the thighs

treading in a dance, squeezing

the flesh in their toes

pulped by these girls, their faces lifted

splashed with the juices

streaks on their legs, drops of blood

on eyelashes, on lips

they hold the wooden rim for balance

each one tipping back her face

rolling her eyes to look inside

lifting her knees high in a rhythm

into the purpled pooling vat.

Ah, the climbing vine of the wine,

the untethered bull dances the field,

and the girls, damp-haired, white-eyed,

and from the opened tap juice running

stopping and starting in flood and spurt

in trickles and sudden gushes

veined purple-red as a breast,

as a breath, fermented as shadow.

its chaos and purple stasis spilling

from the horn; fetch me, taste me,

hold me to shining clusters,

Sew me in the thigh of a god and dance.

One got knocked off, as if it wobbled

another, say ‘butter’, slept in brown paper, leaking a portrait of greasy sweetness;

others were set by the fuzz, or memory,

those old agencies hived in tall buildings where everything leaked or bled,

and nobody, but nobody spoke out.

One gathered in the East, watchful, more dangerous than the sun’s hammer,

elements redefined ‘en bloc’.  Still innocent, we listened in: who would say brass,

who gold to its new ring?

For now, I mean just the blunt word, a passport for stops and releases, and drag it out

for the scum intimacy of a sound

to remember, like a shiver on water, the wet muscle and clay of its shape.

bloc[k]  for the lost weight of history,

and because it is an old, heavy word, one eloquent and dumb as a breeze,

stoop to lift it on the shadow of a voice.

Terry Jones' debut short collection, Furious Resonance, was published by Poetry Salzburg  in 2011, the year he was the winner of the Bridport Prize.  His poems have appeared in Poetry Review, The New Statesman, Agenda, Ambit, The London Magazine, Magma, Iota, The North, Poem, ShoP, The Dark Horse, Poetry Salzburg, New Welsh Review, The Interpreters House, Wasifiri, Planet, TheRialto, Orbis, Brittle Star (and elsewhere) and online in Mascara, Ink Sweat and Tears, Angle Journal of Poetry in English, The Literateur , The Bow-Wow shop, Antiphon (and elsewhere).