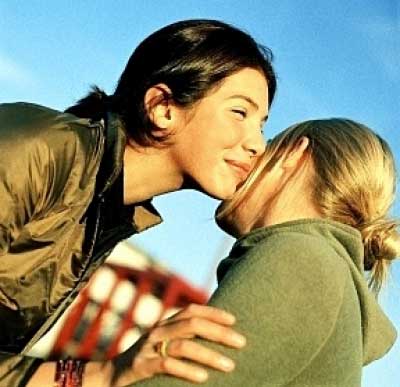 I’m a newcomer to Portugal, so after a while, when I’d made some friends, I was once again faced with the dreaded “kissing ritual,” an affectionate greeting which I appreciate but which has been the cause of some perplexity to me in recent years.

Please don’t misunderstand me.  I find the gesture warm and affectionate, and I not only reciprocate but am often the first to delightedly plant two big kisses on my friends’ cheeks when I run into them.  But in the past, my work landed me squarely in an international, multi-cultural environment in the Netherlands where, it turns out, different nations have different kissing rituals.  Reacting to the social conventions of different countries and doling out the appropriate number of kisses at the right moment did not come naturally to me even after years of greetings exchanged.   Often, the recipient was left hanging, standing still in expectation, because the ritual had not been completed (all this transpired in a second, naturally).  It was too late.  Just a brief pause had occurred but it was long enough to stop me from planting the final (forgotten) kiss on his or her face.

In The Hague, where I worked at the War Crimes Tribunal, if you were Dutch, you got three kisses, if you were Croat, you got two, if you were Serb you got three, and if you were Bosnian you got two.  As for the other 120 countries or so with staff working there, only God knows!  I would assume two is some kind of a neutral international standard, but then again that's just me. Needless to say, with the Slavs, with whom I worked, you had to be very careful.  Not that they would brandish their knives in offense – they could just base their conclusions on where you were from on your kissing habits (I have Slav ancestry).

It’s been quite a while since I left the United States, but when I think back really hard, I really don’t remember kissing anybody except my husband and child.  Yes, there was that perfunctory brushing of the cheek – no, wait, no cheeks were brushed, there was no actual physical contact; it was more like two ostriches sticking their necks out in exploration, but that’s about it.  We’re kind of inhibited about showing too much emotion.

So things were going well here in Portugal and there were no mysteries until one day, a close friend told me: “Anita, people in ‘our circles’ kiss once.”  Now this was quite a revelation to me. Elitism is not in my blood.  I prefer not to be judged by my car, I mean my SUV, my Ray Bans, my blonde highlights and especially the circles I move in. But since I value this particular friend, I jotted this down in my memory and started paying attention to how other people greeted me, noting the differences.  I have lived in six countries, but this was the first in which the kissing ritual made a distinction in social status.

And then, a few months later, I was overjoyed to discover that the Portuguese do, in fact, share my strong sense of egalitarianism.  I discovered a world of attorneys and engineers and architects, Portugal's well-educated professional class, all in their forties, who might as well have been working in New York or London or Paris.  They all planted two kisses on my cheeks in greeting and laughed away the notion of the single kiss when I brought it up.  They are the ones who have real class, and even I, with my American ways, give them an extra hug in greeting when we meet.

Anita Lekic was born in the US while her father was a diplomat there; subsequently his work took their family to several other countries in which she grew up, including Egypt, Brazil and the former Yugoslavia. She returned to the US in her twenties and got her MA in English and PhD in Slavic Languages and Literature and taught at the State University of New York at Stony Brook as an adjunct professor for several years. In 1998, she began working for the UN War Crimes Tribunal in The Hague, Netherlands, and remained there for ten years, taking early retirement and settling in Portugal at the age of 55.