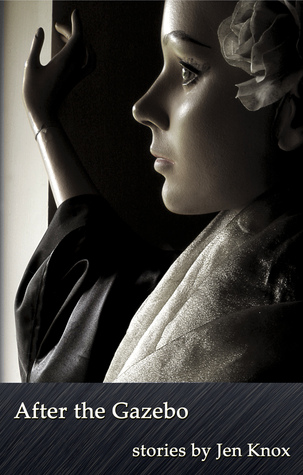 After the Gazebo by Jen Knox

Jen Knox’s After the Gazebo is a carefully constructed, psychologically complex collection of short stories that focuses equally on characterization, revelation, and emotional depth. These are stories which will affect you, challenge you, but which you might not ‘enjoy’ in the usual sense. This is not easy, summertime reading. It is not vapid. It is not safe. The prose is written with a clarity that might come across as simplicity, but which functions rather like the Indian mica-paintings found in the Victoria and Albert; it is easy for the reader to think that they are looking through a window (and how hard can it be to polish some glass?) but in reality they are seeing a beautifully-detailed, complex piece of craft-work – a painting that is more life-like than life itself.

The first story (which also supplied the title of the collection), ‘After the Gazebo’, contains what is probably the most realistic descriptions of actual, real-life love that I have ever read. The unnamed leads meet, become romantically involved, and immediately begin making the kind of compromises which would have appalled their younger selves:

They enjoyed taking Prince on lazy walks after work. They often ate out and met up with friends on weekends. She got a corporate job that replaced her occasional gigs as a yoga instructor. She hated the work but made a lot of friends, fast, and thought it an okay trade for the time being. He got a corporate job; he rather enjoyed it. She gained ﬁve pounds. He gained ten. They joined a gym a few months before the wedding. They made resolutions often. They both wanted to be somewhere else, but were unsure exactly where.

Nevertheless, the couple is portrayed as being nearly overwhelmingly happy; working hard, talking, having extremely well-written sex. This story hinges on a small, hard thing which leads to a tragedy. They agree to marry, and they adopt a dog:

The pug had dermatitis between his folds, which cost money to correct, as did his shots and medications. It was enough to tear a small hole in their new car fund, so they had to reevaluate the year and model they’d go for. The lesser car they selected had good reviews, and the salesman even said—when he realized they weren’t the best negotiators and had told him their actual budget— that it was more durable than a lot of the newer ones. The couple’s fate was sealed when she drove the car oﬀ the lot, when he inserted the CD he’d brought along, just in case. “Ocean Breathes Salty” began the soundtrack. They drove all day, speeding along the peripheral of the city, and stopped for Jamaican jerk chicken at a restaurant they agreed they would return to regularly.

The ‘lesser car’ has safety issues. On the way back from their wedding, they suffer a crash. Both leads die and we readers are left to follow the couple’s extended family (pug included) as they settle into the aftermath.

In ‘The Circus’ a man becomes entranced by a woman who weighs 325lbs and is the sexiest, most complicated person that he has ever met. They are sexually involved but, despite his wishes, nothing ever comes of it:

When I asked Michelle to marry me, I was a little drunk, but I meant it. We were sprawled out on the ﬂoor, sweaty and happy. She was sober, and I worried she might laugh at me. I didn’t think she’d actually consider my proposal. She was silent a long time before those blacklined grey eyes locked my gaze. She spoke slowly. “I was born in 1952.” Sure, I was a little younger than her, but this didn’t matter to me. I was about to slur something to this eﬀect when she continued. “I was pregnant in 1969, 1972 and 1974 in Wyoming and 1977 here in Ohio. The fathers are assholes. My kids are all half-asshole. With so many people in my family already, marrying me would be like joining the circus. It’s the type of circus where none of the performers get along, and the trapeze act is painful to watch.” She laughed and put her mouth up to my ear. “I’ll spare you.”

It was refreshing to read a story in which everything was true but nothing was conventional. Michelle was a well-drawn, deeply-flawed, complicated woman who was widely perceived (within the context of the story) as beautiful and good. The exact opposite of the type of romantic lead the media usually presents. When she dies (there is a lot of death in this book) the people that she leaves behind are changed in profoundly realistic ways.

‘A Whole Toy’ is told in the voice of an imaginative child who must watch as his mother is robbed at gunpoint as she operates a fast-food cash-register. The boy (whose father was abusive) perceives police officers as large, black dogs who are trained to rescue people dressed in orange and red – the colours of an American McDonald’s uniform:

The man’s voice, yelling and commanding, continues, and I can’t help but look over. He is dressed in all black and may not be visible to the dogs. He is pointing a gun at my mother as she rummages around in the register, collecting green bills—the good monsters. Mom looks scared, the way she used to when Dad was around. The dogs tried to eat my father, tearing him down after he threw a chair across the room. They will take this man, too.

What makes this collection so interesting to me is its focus on reality-as-it-is and not reality-as-it-is-portrayed. There are no stereotypes here (of any kind), there is no sociological short-hand. Every circumstance, however familiar it seems, is viewed as though it were a new, unrecorded thing. Fat women. Fast-food workers. Yuppies. Children. They are all more than their shapes, more than their seeming. They are all drawn true.