Can You Please Keep It Down Over There? 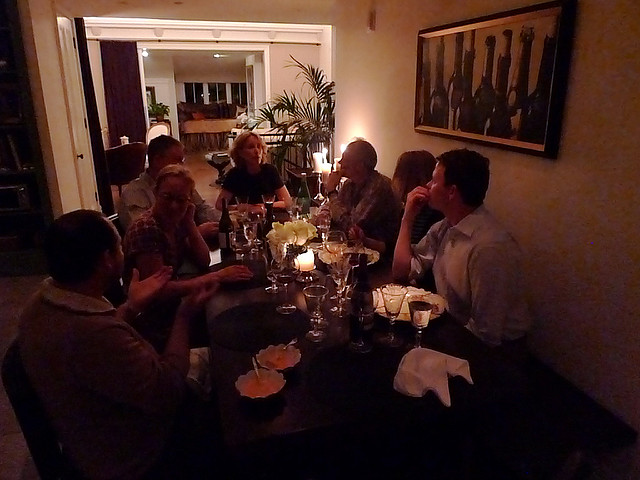 All in all, the party went well, though I was in a foul mood all evening. Karen and I had argued in the car, the usual one. Every year I agree to go to her company’s holiday party, and every year I try to back out at the last minute. I recognize the pattern, but am powerless to prevent it. I want to be a good sport, but on the weekends I hate to be reminded of the things we do for money.

It was worse this year. I lost my job in March, and have tried to make my way as a freelancer. There are plenty of jobs, as long as you don’t expect to earn what you’re worth. In other words, Karen pays for everything. So, even though I have no right to object to going to her party, I hate and resent it. It seems to me that I’ve left too much unfinished, and wasting time is the ultimate sin. (I haven’t gotten any work done all weekend, but was just getting ready to start.)

The world is not ending soon (as far as I know), but there are cracks in the façade and termites in the basement and I haven’t got time to spare. Our university degrees are merely decorative wall hangings now, and I wear my accumulated aches and disillusionments like a bad perm. It is easy for me to make a list of all the things that I hate, and even the mildest annoyance can be the subject of a fifteen minute rant. Karen has gotten sick of consoling me, and usually leaves me to my own devices.

“Look, I need to make an appearance, okay? You know how important this is, especially in a small company.”

“So we can leave early if I want?”

“Everyone loves seeing you.”

“They complain if you’re not there.”

“Jesus fucking Christ, Daniel. It’s called a social obligation. Sometimes I think you just like to argue. You should have been a lawyer.”

“I should have been a rock star. If only I’d learned to play guitar.”

“Look, if you want to leave, well, there’s the door. I’ll give you ten dollars for a cab.”

“I’ll need money for the tip.”

The argument magically ended just as I pulled into the driveway of her boss’s house. Brian Forbes, the CEO of BCF Enterprises, lives in an enormous mansion that he calls a cottage, on the top of the highest hill in the city. I greeted the valet with a hi sigh, and exchanged the keys for a ticket, then hurried around to the passenger side to help Karen get out of the car. By the time I got there, she was already waiting for me, arms folded across her chest.

“I’m sorry, baby. I overreacted.” Trembling now in the winter cold, hoping she will be merciful (and she always is.)

I kissed her and held her hand as we started walking toward the front door.

“You know I love you, baby.” (I only say it when I've done something horribly wrong.)

“In spite of all my flaws?”

“In spite of all your flaws.” (She was smiling now.) “It’s just that the banal chatter of a party is like the sound of hammering in my head. It's hard to talk to other people. I think we're all fictional characters now.”

Shit, I sound like such a douche. Why can’t I get over myself?

“Everybody pretends, Daniel? Haven’t you figured that out already? You used to rant about that when we were in college. Poseurs. That’s what you used to call them.”

Sometimes I like to say that Karen and I are complete opposites. She’s friendly; I’m antisocial. She's earnest; I'm cynical. She’s basically happy; I’m basically un. I often assert that I know exactly what she's going to say before she opens her mouth. It amuses her when I pretend to be smarter than I am.

There are times when I’m very pessimistic about our future together. I don’t like to do the things we used to do together. She sees her friends at lunchtime, or goes out alone in the evenings. I am invited, I’m always invited, but she knows that I’ll decline. (I'm a very sociable hermit. I say hi to the mail carrier every day.)

She assures me that she loves me, far more often than strictly necessary, but surely she must be getting sick of the sound of my voice. I would never leave her, but sometimes I just see myself slipping away, drifting toward endlessly streaming nostalgia, a life of mere evocation. I have no desire to be re-illusioned—I remember how humiliating it was—I just wish I could be younger and more handsome and smarter than I was.

(She says that I do over-intellectualize sometimes. I say I don’t.)

I told Karen “I love you” on our first date. I meant it ironically, of course. We were having a discussion of all the things you should never ever say on a first date—and I won. I was giddy over how easy it was to talk to her, with only a couple of drinks in hand. It was a blind date, so we closed our eyes and pretended that we shared a guide dog named Sparky. I remember a discussion of “Long Jean Silver” the porn star. Karen had seen one of her films the previous summer, in Times Square, and was trying to figure why men enjoyed watching amputees fuck.

My mind was filled with all sorts of game theory when it came to love, but none of it mattered with Karen. She seemed to understand immediately that I was completely inept, but basically harmless. And so I went home with her—and never really left. She was graduating that summer, while I was staying on for another year, and of course I worried that she would forget about me when I was gone. She ordered me to stop worrying—everything would work out. And so it did.

When we got married I dedicated myself to making sure that she would suffer no grievous inconveniences, and share the burden when she did. Now I know that all I can do is try to keep her safe, and comfort her when it all goes wrong. And yet it's clear to me now that I love her more than ever.

As soon as we entered the room, Karen was engulfed by friends. She tried to introduce me, but of course they all remembered me from the year before, so I excused myself, and went to look for a glass of champagne.

I have a proven strategy for not drinking. I was holding my champagne glass in my hand, and refusing all refills. Karen doesn't drink. The habit disgusts her.

Drinking is the only effective cure for shyness I know. (I am not a shy person. I just don't see the need to gab.) It used to take me four glasses of wine to get through a party like this. Six drinks and I’d be on the roof pitching snowballs. This time, I made it through the party on only two. Progress, I suppose.

I wandered around the room, hovering on the periphery of conversations, looking over at the stairs now and then to check my escape routes, but hanging in there reasonably well. Eventually I started talking with a guy named Matt and his wife, whose name I’ve forgotten.

“Well, you’re the perfect one to weigh in on the great controversy.”

“What do you think of the latest reorg in Sales? I mean, based on what Karen’s told you.”

Karen hasn’t told me anything. She used to talk about work with me, but soon realized that it only frustrated me. I specialized in giving her unrealistic advice.

I excused myself and made a few more circuits around the room, stuffing random pieces of passing food in my mouth and waving at anyone who waved at me, as if I were a passing celebrity or a politician avoiding reporters’ inquiries.

Eventually Adrianne cornered me on my way to the bathroom. That’s the problem with being shy. Only the most brazen people approach you. Adrianne is the office intellectual, and therefore extremely bitter (believe me, I know). She tries to trap partygoers into conversations about art history—her own useless degree.

I looked over at Karen to see if she would bail me out, but she just gave me a sympathetic shrug.

“It's a shame how much money Brian is paying for cruise ship art.”

“If Van Gogh could see these paintings he'd cut off the rest of his face.”

“Admit it, you've been practicing that line all day.”

“Narcissism is the curse of the present generation.”

“Convinced that everyone else in the world is breathlessly waiting to hear their opinion.”

“Raised to believe we're all unique.”

“Biologically this is ridiculous.”

We all agree. She insists that we do.

By the end of the evening the crowd had thinned out, and Karen asked me to dance. And the deejay was playing a schlocky ballad from the eighties—which used to be our song. And it was clear what the deejay intended: reconciliation, after a long, difficult night

“No, I thought maybe you did.”

“Well, do you want to dance? We won't get very many more chances.” (A minor telepathy? Maybe I'm getting too predictable.)

And I gave her my usual excuses (I’m out of practice, my back hurts, I’m embarrassed to be doing this in front of so many people). But secretly I was hoping that one grand sentimental gesture would save the day, as it had so many times before. Thought = paralysis. Dance, motherfucker, dance.

And so we held each close as we parried away the years and all that had faded now endured. And so we danced, and ended our dance with a kiss—the only two sober people in the room.

(There would be another argument tomorrow, but for now we were dancing.)

Michael Koenig is a writer, editor, and designer in Oakland, California who has published numerous pieces of short fiction and poetry in literary publications such as The Old Crow Review, The Pacific Coast Journal, Anything that Moves, Cathartic, Poetry: USA, Night Songs, Prisoners of the Night, and Spitball.