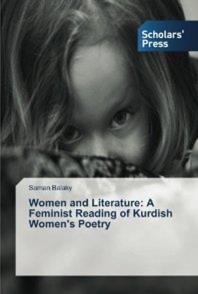 Women and Literature: A Feminist Reading of Kurdish Women’s Poetry

There is something moving and poignant about reading this comprehensive, thoroughly-researched and sympathetic overview of Kurdish women’s poetry.

That’s because most of the poets and their work remain unable to speak for themselves directly, untranslated for the most part into more widely-used languages such as Spanish and English and ignored by their own literary establishment (and those of other countries).

This book attempts to bring this work into a wider arena and to provide the serious critical attention it has lacked so far. It’s the result of a PhD thesis which the Kurdish scholar Saman Balaky completed at in 2013. It focuses on the period 1990-2009  when women’s writing experienced a ‘hectic’ flowering, partly as a result of ’s liberation in 1991 following the overthrow of the Iraqi Ba’th regime. Balaky studies seven poets in the Diaspora and seventeen living in , all writing in Sorani Kurdish.

The theoretical structure is, as it states, specifically feminist, drawing on Anglo-American scholarship and gynocritics, particularly influenced by Elaine Showalter. Balaky also compares the different experiences and influences of the two different groups and reflects on how these impact on themes of gender and nationalism.

His analysis then is predominantly thematic, concentrating on how the poets express their struggles against patriarchy, misogynistic laws and tribalism depending on whether they write from home or from the Diaspora. While those in write of the female /maternal personification of homeland, poets abroad write defiantly of women’s sexuality in the face of repression; the poet Heme writes of her longing for home in exile.

Balaky writes that the work of a Kurdish woman poet ‘literally holds the exact features of her life and the real stories she has experienced since her childhood’. From the initial and important ‘airing of grievances’, as he puts it, the search for a ‘female writing’ comes into being, separate from that of masculine-dominated society and culture. In many ways he mirrors this progression with the feminist wave of Western poetry which rose in the 1960/1970s, attributing to it similar triggers.

My knowledge of Kurdish history, politics and women’s poetry is slight: the only familiar names here are Choman Hardi and Nazand Begikhani. I am wary of  accepting too easily the apparent  similarities set out here between what I know of the Western rise of feminist poetry with that in . I feel there is too smooth an ellision and that the Kurdish circumstances have their own complexities, the poetry more subtle differences as well as similarities. It is therefore so important that these voices be translated into a wide variety of languages. Bells of Speech by Nazand Begikhani is available in English translation, and Choman Hardi and Mimi Khalvati have translated the work of Kajal Ahmad into English. Hardi herself has a collection, Life for Us, published in English from Bloodaxe. Balaky’s quotes from his seventeen poets are powerful: the poet Ehmed personifies the street as symbolic of  visionary independence and right of access in contrast to the closed, oppressive house and writes:  ‘When I arrive at the station of women-killers/I have a feeling/that I love the street more than man’. Later, Balaky translates these lines of hers from the long poem ‘The History of the Apple Tree’:

How without any leaves on

Resists the harshness of winter

I too without weapon, barehandedly

This is a most welcome and important book which brings a  new and wider readership to these  ignored and undervalued poets. If the theoretical structure is a bit too US and Eurocentric, there will hopefully be further studies to unravel more complex patterns and comparisons in the future. In the meantime, this poetry needs

translation into other languages – Spanish, German, Italian, Swedish, English, Portugese, Japanese, Chinese and more  -  by other poets so their voices can be heard to the best advantage, less mediated and arranged as specimens.