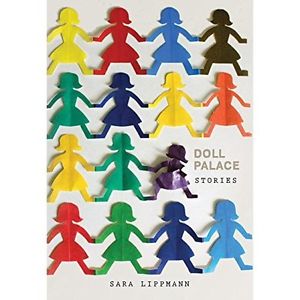 Doll Palace, Sara Lippmann’s debut collection is a real treat: smart, arresting, and poignant. The 23 short stories offer a fascinating kaleidoscope, letting the reader enter the minds of Lippmann’s characters: anxiety-ridden, yet hopeful teenagers and unhappy, embittered grownups, all trying, coping, struggling, and ultimately failing. There is an abundance of grief, guilt, and confusion, characters frozen in past traumas, crippled by the fear that a tragic event in their past defines their lives and themselves forever (The Last Resort, Everyone Has Your Best Interests at Heart).

Several of these stories deal with basic, defining experiences, usually told from the perspective of a female character: losing virginity, having a terminally ill child, going through abortion, having cancer. Others give account of the slow realization that something is broken, not working any more: a relationship, a marriage (Queen of Hearts, Tomorrowland). There are stories with a deliberate quirkiness, such as Houseboy or Babydollz: in the first, a former Israeli soldier turned servant observes the lives of his absurdly wealthy employers, his broken English shown with linguistic brilliance, while in Babydollz, strippers (one of whom also working as a children’s hairdresser, cutting hair in an Elmo costume) contemplate life and love.

The element of the absurd, the grotesque, especially mingled with that of the heartbreaking, is also present in Jew, Talisman or All This Happiness.

Lippmann is most convincing when describing young girls, as in Whipping Post, Target Girl, or Everyone Has Your Best Interests at Heart. She depicts these stories of initiation, of the transit to adulthood with great compassion, portraying the fragile bravado and cluelessness of her teenage protagonists with acute authenticity. This is brilliantly captured in the collection’s first story, Whipping Post: “Somewhere, it must be written: Tell a little sister she’s hotter than cooler than more badass than her older sister and she will do anything to make it feel true.”

Lippmann is also a master of handling time: we see the juxtaposition of past and present, bringing to life in rich detail a past that overshadows the present inescapably, often evoking memories which are so defining and painful that it is better to deny that one remembers them (“In the car I tell my sister I hardly remember”, states the now grown-up protagonist of Whipping Post).

Apart from the shifting time frame, there is a stream-of-consciousness technique employed by the author in a highly skillful, accomplished way, letting us inside her characters to feel their vulnerability, their resilience, their flaws, their humanness. Lippmann’s narration and language are a joy to the reader, despite all the harrowing bleakness her stories exude.

Recurring images and metaphors connect these stories. Many feature claustrophobia, being trapped mentally or physically, or the threat of it (the apartment in Starter Home, the shop in Jew, the family being stuck in rush-hour traffic in Body Scan, or the ending of Everyone Has Your Best Interests at Heart). Others emphasize the element of the grotesque. And, of course, there is the all-pervasive doll metaphor, ingeniously woven into the texture of the stories, reminiscent of Ibsen’s Doll House, and offering various interpretations: infantilization, objectification (as in Human Interest, by the photographer), the inability/the impossibility of growing up (the 30-year-old babysitter in Queen of Hearts, stealing Xanax from the family, or Angie in All This Happiness, looking “like everyone else—well-proportioned, apple-cheeked; she could have been the glossy face on a toy box. The only hint of difference presented itself in the perpetual sludge that pooled in the corners of her mouth”).

Lippmann shows us many iconic places of this artificial “doll universe”: the sickeningly sweet world of Oh! Fudge, the candy store in Everyone Has Your Best Interests at Heart, Disney World in Tomorrowland, or the monstrous place in Doll Palace, “a matryoshka mall of doll hell” with customized dolls getting manicures, pedicures, ear piercings, glitter tattoos, and little girls stuffing themselves with endless rows of pastry. The mandatory serenity to be reached on yoga retreats (Queen of Hearts, The Best of Us) also looks rather suspicious.

In these short stories, family and marriage are often depicted as vehicles of dishonesty, with the bond between children and parents, between husband and wife damaged, and parents being unable to connect with their children in crucial moments: “Ms. Betts would drive me to the ER in her mustard Pinto during lunch, where after school my father would find me, snapping back the pastel curtain as antibiotics seeped through a vein, and call me a whore” (Whipping Post). Unhappiness is inevitably passed down from one generation to the next, despite the best intentions sometimes present (Body Scan, Tomorrowland).

Occasionally, the resolution appears just a bit too enigmatic. Nevertheless, the accomplished prose, the haunting atmosphere and the emotional accuracy invite the reader to re-read this collection, and reflect on its stories.