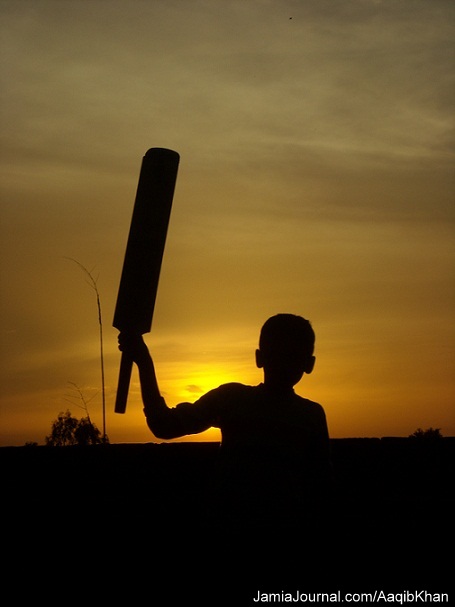 CAPRICE ON THE ARIZONA BORDER

If moonlight is strong enough, cricket played under moonlight

is surely a pastoral caprice; thieves, or bandits, hiding in whites,

under their arms a roll of carpet, mark out the circle of their secret

ball. Between them a chain of 22 yards laid as sanction across

the Arizona border staking their claim. The teams like ghosts shake

hands. The carpet is unrolled like a prayer mat to the moon. No

sound but the mallet knocking. The stumps aligned and the bails

reverently lowered into their niche. Like Bedouin the players wait

in tents, the desert waits. Someone has drawn in the sand.

The game is silent, just the footfalls as the bowler runs, the tap

tapping of the nocturnal bat and that chord as leather strikes willow.

The desert moon will reflect on the ritual, the deep desire to summon

a field, to lay down the pasture, to anoint the gates, as shadows

flicker in the guise of exiles performing this instructive dance,

like insects or birds repeating their song, this ceremony of home.


They leave behind imprints, the 22 yards of outline, the run up,
the marks of the slips, lonely fielders, and the wrestling floor
of the wicket keeper, the rim of the boundary as full as the moon.
And what of batsmen and their high steps to the centre? In parallel
are the dragging creases of their return, their time in the centre over,
for this is a stage where men might preen and a moonflower opens
with bats like stamens. We read the structure like a fossil but cricket
is capricious, prey to the deviation of an air current and fragile
as a moth’s wings to collapse at a touch. Uncertainty is at the heart,
uncertainty in the flight, in the grip, in the back lift, in the shine
of the ball, in the earth. They set the game up like gods and let it live.

Bio: S. J. Litherland won a Northern Writers' Award in 2000 to work on the manuscript of The Work of the Wind (published by Flambard press in 2006). Her poetry has appeared in various anthologies, including New Women Poets (Bloodaxe) and North by North East (Iron). She has published six full collections including "The Homage" (Iron 2006), poems inspired by ex-England cricket captain Nasser Hussain. The book was nominated as Cricket Book of the Year Award. She was co-editor of The Poetry of Perestroika (Iron) and has edited many other books.

Notes: Caprice on the Arizona Border was commissioned for the anthology We Sat Down at Grand Central Station and Wept (based on lines from Elizabeth Smart) edited by Kevin Cadwallender.