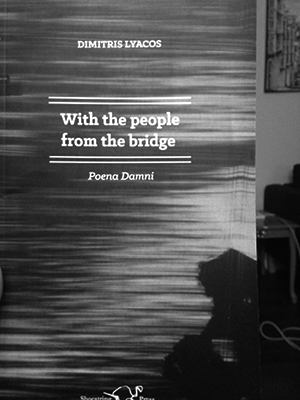 ‘With the people from the bridge: Poena Damni’ by Dimitris Lyacos

Published in The Ofi Press issue 44.

Dimitris Lyacos' With the people from the bridge: Poena Damni is the second instalment of a long and brutal sequence of avant-garde poetry. Set among the homeless who have formed a settlement under a bridge (their discourses are constantly interrupted by trains and traffic) this story alternates between apocalyptic dystopia, poetic religiosity, and brutal secular realism. When faith and desperation meet the ending is often mired in blood and misery. In this long sequence a mad robber/saint leads a chorus of ageless, ugly women in worship of an unknowable God.

With the people… was translated from the Greek by Shorsha Sullivan and he did such a complete and convincing job of it that the poems read as though they were originally written in the English tongue. There isn't any of the odd, awful awkwardness so often present in second-rate translations, and that's a rare and beautiful thing.

In the prose-poetry introduction, the Narrator rips pages from a tattered copy of a Bible as he declaims his dark prophecy. He’s marked out from the other mortals by 'A scar like a word on his chest, from his neck downwards. Sits down, takes two pieces of wood, hammers, he made a cross. Sticks it in the mud.' A madman, marked by the word of God, made visible in his flesh. Lyacos uses images to make a myth out of homelessness and at the same time reveal the brutal horror of that state.

In the beginning, the Narrator is described as a decrepit St Jerome, translating the Bible into the many tongues of madness:

and day in the tombs

and in the mountains he was crying

and cutting himself with stones.

But when he saw Jesus afar

It isn't long before he metamorphoses into another Biblical identity; the possessed boy whose many spirits were expelled by Christ (somewhat heartlessly) into a herd of self-destructive pigs:

I adjure thee by God,

that thou torment me not.

For he said unto him; come out thou

unclean spirit from the

man, and he asked him;

what is thy name? and he answered

saying; my name is legion

for we are many.

These sermons are occasionally interrupted (and supported) by a chorus of female voices. The women focus on the things of this world, the tasks necessary for continuing life, and in their declamation these tasks become almost incantatory:

You rake the ash.

A half-burned twig curling up a little.

You stay inside. Wait.

Hush. Listen now. Did you hear?

They have come. They will sit side by side.

You will bring them something to drink.

This year they have come from further away.

Let us sit all together.

Lyacos has been refining this text for the better part of twenty years and the edges glisten for it, deadly, clean and sharp. He uses short, brutal declarative sentences (interspersed with to-the-point descriptions) to build an inescapable sense of love and misery:

Hairs stuck on her skin.

She had sweated a lot.

That smell beside me and

Then I slept a little. When I woke up

I was holding her in my arms.

Lyacos has a gift for mixing Biblical speech with mad, factual brutality. Here he contrasts a version of Ezekiel's life-giving vision of the dry bones with a dispatch-like description of grave-robbing and the (implied) madness inherent in the desire for rebirth:

I will open your graves

and cause you to come up out of your graves

behold I will cause breath to enter into you

and I will lay sinews upon you

and will bring up flesh upon you

and will cover you with skin

and put breath in you

and ye shall live.

The partially decomposed head of a

woman, stolen from a crypt at

early Sunday, was found in the street

next to a man who was subsequently

The interesting thing is that, after so long spent in this mad, desperate company the sane boundaries of what we think of as the 'real' world begin to darkle and shift. Perhaps the dead can rise again. Perhaps the world is ending only to begin afresh. This is Lyacos' great gift. Shorsha Sullivan's great skill is that he was able to translate it so seamlessly, so well, that his voice disappeared into the margins.