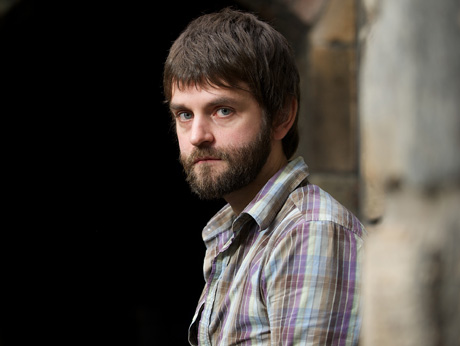 Martin MacInnes is from Inverness, Scotland.  He won the Manchester Fiction Prize in 2014 and his debut novel, Infinite Ground, is published in August 2016.

1.    Please tell us about your debut novel, Infinite Ground. What inspired you to write about Latin America?

Latin America for a couple of reasons: biodiversity and literary history.  I wanted the novel to be in the same landmass as the Amazon, and I wanted to refer to several writers from the region, particularly Borges and Lispector.

Infinite Ground is an investigative novel about nature and missing persons.  A low-level office-worker goes missing from a family meal in a heatwave and an older inspector looks for him.  The first half focuses on the missing person's corporate background; the inspector finds traces of a strange microbiology in the empty office, and from there he starts to question everything.  He questions his life, his identity, the nature of the scenes around him, the reality or otherwise of the investigation.  The second half takes place in an outpost by the forest; the inspector is convinced that the missing person has walked there.

It's only very thinly a crime novel.  I'm not competent to write a real thriller and it's not what I'm trying to do.  The missing person investigation was important for a few reasons, but one thing it did was lend discipline and direction to the material.  I found it helpful writing under the guise of a 'search'.  I wanted to write about the ferocity and, as Lispector would say, the 'neutrality' of the natural world.  And I wanted to diminish the western corporate world by putting it in this context.

The extra-human world shouldn't be reduced to decoration or to indicators of a character's thoughts, as is almost always the case in fiction. I'm interested in ecology and psychology and the challenges of personally reconciling the latter with the former. I'm also interested in playing with scale, orders of magnitude, matters of significance.  You really could spend a lifetime analysing any arbitrary patch of the planet without ever exhausting its interest.  And I suppose at its simplest it's a novel about loss and wonder: loss of stability, certainty, loss of life.  In intent it's a blazing tribute to improbable life, but it might come across a bit darker than that.

2.    Could you describe your writing spot here in Mexico? Do you have a favourite place?

I've got a room in Roma for three months.  I really love it here, and I'm getting a lot done.  My brother and his girlfriend have kindly let me stay with them to finish a draft of another novel.  I write upstairs from about 6 or 7 in the morning and go downs when the sun comes in too strongly.  I write first drafts on paper; I'm too self-conscious to do that in a cafe, but I'll walk a lot, sit in parks, trying to plan things out.  I've consciously isolated myself here, which means I'm not seeing as much of the city as I could;  I'm constantly giving myself a hard time about that.

3.    Do you believe that art and literature can 'make a difference'?

Who knows.  But fiction, for the reader and the writer, is an exercise in sustained empathy and curiosity, and we could do with more of that.

4.    What do you feel is the strongest marker of your identity? How does this impact upon your writing?

I don't have a particularly strong identity and I think that helps in my fiction.  I like losing myself in other speculations.  When I was young I was writing more introspective stuff, and it was awful.   It was a good thing, liberating as a writer, to realise I'm neither particuarly interesting nor bound by my biography.  One thing I am strong willed about, however, is making the time to write.

5. What have been some of the major influences in the progress and evolution of your writing?

Libraries: going through the stacks and picking things up intuitively.  At home I also write there: librares are incredibly valuable spaces, and the closures that the UK government is forcing are a travesty.

Particular authors, roughly chronological according to when I first read them: Virginia Woolf; VS Naipaul; Eudora Welty; EO Wilson; Ryszard Kapuscinski; Paul Bowles; John Berger; J.G. Ballard; Clarice Lispector; Thomas Bernhard.  And of those, Wilson has helped the most.  Isn't it ridiculous that it took until last year for a non-fiction writer to win the Nobel Prize for Literature?

6.    What are your thoughts on good and bad reviews?

Firstly I'd hope to get reviews.  It's a pretty crowded market.  And then I'd hope to recover intact from the bad ones.  I'm also worried about inevitably trawling the internet late at night in a kind of morbid fascination, and it getting in the way of work.  I suppose with good reviews, the danger could be that you read them as an authority on what you're doing right, and you try to follow them.

7.    Where do you see yourself in ten years time?

I'd hope to still be publishing; I'd be disappointed if Infinite Ground was my only novel, as I have a lot of ideas and I'm still learning what I'm doing.  No idea where I'd be living, but Mexico's appealing.