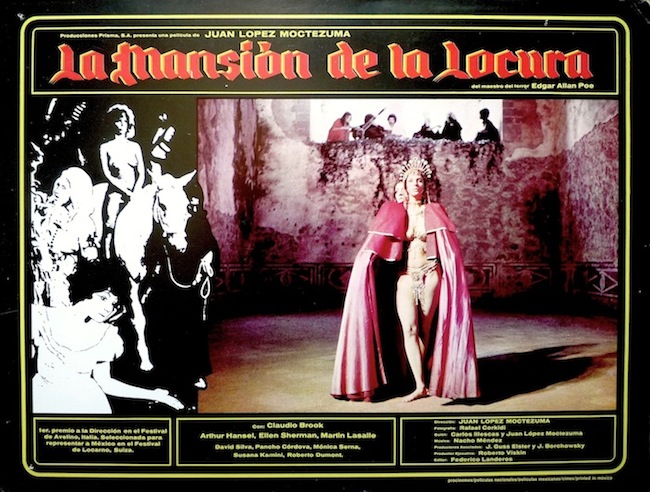 Mansion of Madness (or “Dr. Tarr’s Torture Dungeon,” for those who want to view it for free on Youtube) was not a hit when it was released in Mexico in 1972. Since that time, it has not grown in popularity among following generations.

Certainly, if you love the classics–book classics, film classics, we all know them when we experience them–then Mansion of Madness stands as an obscure island of great ideas. Its tones are Gothic, draped in atmosphere of the Romantic poets. Grainy film, Victorian garb, a xylophone-based soundtrack; and a film technique based on visual diversions in which the speaking characters are overshadowed at times by distant goats, inmates walloping each other with sticks, or Philipino boys singing from the rims of steel chimneys. It's all there.

The film is visually lush and the sets are engaging enough to raise the question of how much the viewer sees is artistic construction and how much is recontextualized historic rubble. The dialogue is full of smirking, good wit. If the viewer is accustomed to classical acting in the English tradition, then the antics of the characters appear less as stilted mannerisms and more as fine-tuned, deadpan absurdity.

The star of Mansion of Madness is the erudite, blonde Mexican actor Claudio Brook, whom I have dubbed "the Vincent Price of Mexico." Not only has he put his mark on Mexican culture from their soap operas to their regular operas (Don Quixote), but he is the subject of the youtube clip known as "the best villain laugh ever." [https://www.youtube.com/watch?v=j5TLlaKWqN8]

It is this man, in the guise of Dr. Maillard, who lectures Gaston Leblanc, who describes his "soothing system" with which the whims of insane people are humored and even reinforced. A good portion of the film centers upon this lengthy lecture, delivered during a tour of his French asylum. As the two men wander deeper through darkening shades of madness, toward the inevitable dungeon at the asylum’s core, Maillard begins to display delusions of grandeur, a penchant for fallacy and confabulation, and graver mental disturbances still; and all with such a memorable cadence that you cannot help but warm to his undeniable madness. In this light Maillard seems like Don Quixote: He wants to take the world away from cold, rational industrialists and give it to people who have no powers of reasoning.

Gaston LeBlanc came to Maillard’s asylum as a reporter, as is called for by the Poe story that inspired the film. The plot propels itself on the same love of robust discourse that stylizes all of Poe’s tales. One of the best interchanges between the two main characters is lifted nearly verbatim from the lofty dialogue of The System of Dr. Tarr and Professor Fether:

"And the new system is one of your own invention?"

"Not altogether. Some portions of it are referable to Dr. Tarr, of whom you have, necessarily, heard; and, again, there are modifications in my plan which I am happy to acknowledge as belonging of right to the celebrated Professor Fether, with whom, if I mistake not, you have the honor of an intimate acquaintance."

"I am quite ashamed to confess," I replied, "that I have never even heard the names of either gentleman before."

"Good heavens!" ejaculated my host, drawing back his chair abruptly, and uplifting his hands. "I surely do not hear you aright! You did not intend to say, eh? that you had never heard either of the learned Doctor Tarr, or of the celebrated Professor Fether?"

Gaston is reluctant to judge Maillard as insane until it is too late to turn back. He is also oblivious to what is happening outside the dungeon, as the people who gave him a ride to the remote property are harassed by insane peasants and the Devil. Thus once he finds out he is in over his head with Maillard, his situation becomes more dangerous with every step he takes to escape the dungeon and save a young girl, Eugenie, from the clutches of her crazy captor. The action of the film is thus driven by archetypes of chivalry, romance, and villainy, but Moctezuma uses these with as much black humor as can be accommodated.

The tendency to compare Moctezuma to his contemporaries seems to deprive Mansion of Madness of critical acclaim in the decades since its release. The initial lack of attention the film received from its native audience was a matter of marketing: During the 1950s and 1960s, Mexican moviegoers were exposed to more North American and international films, many times over, than films produced in Mexico. Others such as El Topo and Simón del Desierto, were not given such exposure.

Unfortunately, Moctezuma’s film was not mainstream enough to draw many investors, and it did not have a clear enough social agenda to receive a large budget from the Banco Cinematográfico (which had become nationalized in the early 1960s to produce films and thereby judge what they believed people wanted to see).

However, this suppression of avant-garde cinema brought about a Golden Age of psychedelic surrealist horror films in the 1970s underground scene. In Mexico especially, a new generation of film students at the Centro Universitario de Estudios Cinematográficos, established in 1963, were anxious to make pointed films that went far beyond the creative restraints of mainstream funding. Most common among the themes were social issues or technological fears. Less common was the literary perspective found in the films of Juan Lopez Moctezuma, which were nonetheless strange and controversial.

Mansion of Madness has been restored and released on DVD by Mondo Macabro, the international gateway for strange films to wind up in curious hands. The images in this version are much clearer than the original, and the extra features provide a short documentary on the film, as well as an interview with the director and insight from Guillermo Del Toro.

Carl Foster is a grad student who lives in New Orleans. Instead of making money he just keeps what he has by not using his car, washing his clothes by hand, and participating in efficient pastimes like writing and walking his deaf chihuahua. He has published fiction and critical work in The Barnes and Noble Review, The Oxford American Journal, Defenestration, and Frostwriting, and is currently at work on another chilling tale.