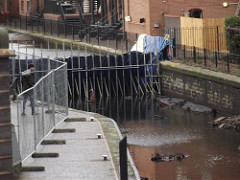 Three swans moved purposefully towards Baskerville who had been sniffing about at the edge of the canal. Aoife looked up from her phone, just as one of them made a lunge at him. He yelped, and cowered in the rushes. She rushed over, trying to shoo the swan away but it reared up and pecked her right on the cheekbone. She stumbled backwards and stepped in fresh dog shit. The swan glided away, swinging its rear at her.

‘Head low with many apologies, me arse.’

Then her phone beeped. From Joanne: ‘On my way.’

She was going to suggest to Joanne that they get a take-away or something but the swan had zapped all her goodwill. Her face was throbbing. She wiped her shoe on the grass and punched in a reply as she walked: ‘About time. Was about to dump your stuff in the canal.’

As she neared her apartment block, she saw the Bugaboo lying on the canal wall just under her balcony. She moved closer. It was definitely the same buggy—the one she’d sold a couple of weeks ago. She edged around to the front of her building and punched in the code to open the interior door. Then she dashed from the lift through her own front door, and bolted it from the inside.

There was a message on her machine: ‘Hello. This is Mum2Three.’ She remembered the whiny voice. ‘I told you on the forum that the buggy is broken. I’m bringing it over. I need my money back.’

Aoife had sold the Bugaboo for a hundred and fifty euro—it was worth twice that at least—but a week after picking it up, without bothering to contact Aoife first, the woman had put up a post on the forum warning other members not to buy anything from Aoife82 because she sold faulty items. Aoife might have refunded the money if Mum2Three had explained her problem politely and in private, but not after being accused of deliberately selling a dud.

‘The buggy was in perfect working order when I handed it over,’ she wrote. ‘Perhaps you broke it yourself.’

Then Mum2Three issued her litany of problems: She had a crippling mortgage, high crèche fees and a long commute every day to Dublin. As if all that was Aoife’s fault. As if Aoife had it easy. And when Aoife tried to stand up for herself, Mum2Three announced that she was deleting all her posts and leaving the forum; the world would be a better place without her.

Then the other women on the forum waded in with their opinions. It transpired that Mum2Three was a much-loved member of the online community, whereas Aoife82 had only joined the site to use the Buy & Sell. There were heartfelt pleas for Mum2Three to come back and talk, not to do anything rash. There were demands that Aoife82 apologise and refund the money. Aoife stopped responding, but couldn’t stop reading. They were worried about Mum2Three. Wasn’t she on anti-depressants? Were her children safe? Should they phone social services? Or the guards?

Aoife plugged out the phone and vowed not to give Mum2Three any more headspace. She looked at the closed door to Joanne’s room. Joanne hadn’t spent a single night there in two months. She had told Aoife about three weeks ago that she was ‘officially’ moving out and had texted on Wednesday to say she was coming around to gather the rest of her stuff. Not a word about the money owed. Aoife went in and checked the wardrobe to see if Joanne had left the hair straightener she’d borrowed, or Aoife’s red leather jacket. She hadn’t. She’d only left the dregs of her own stuff—a flimsy raincoat, a pair of manky slippers, a few faded t-shirts.

‘Clearing out wardrobe. Where r u?’

Then her eye fell on the little blue potty under the bed. She leaned down to pull it out, remembering the panic when Aaron would shout ‘do piggle, Mammy’ and Joanne would airlift him to the potty. Later, when he was more competent, he used to proudly carry the spoils of his efforts to the bathroom, with Joanne shadowing him, steadying his hands.

Her mother was right, much as she hated to admit it even to herself—taking out a mortgage with her best friend hadn’t been a smart move. ‘What if you fall out?’ her mother had said. ‘What if one of you meets someone and wants to move out?’

Joanne did meet someone, but she didn’t move out. And when she got pregnant, and her boyfriend wanted nothing to do with it, it was Aoife who went with her to the hospital appointments and endured all the drama and turmoil of a new baby in a small apartment—the squeals in the night, the smelly nappies and the clutter of baby paraphernalia. And after four years, when she felt like Aaron was her own son, Joanne had decided to move in with Greg-I’m-so-smart-cause-I-waited-for-house-prices-to-fall McGonagle.

But she and Joanne were stuck in negative equity. That was Joanne’s problem as much as hers.

And Joanne owed her six hundred euro in mortgage payments. So she decided to sell some of the baby equipment Joanne had left behind and now she found herself in this mess with Mum2Three stalking her.

She went into the kitchen to pour herself a glass of wine and the cold air hit her. The balcony door was slightly ajar. Then she saw the empty ham packet on the floor. She froze, and whispered to Baskerville: ‘Here, boy!’

He came skulking in, and gave the ham packet a quick lick. He eyed Aoife guiltily.

She took a deep breath. Of course, it was Baskerville who ate the ham. She must have left it on the counter. Mum2Three had hardly climbed up three storeys to her balcony to break in and raid her fridge.

When she was satisfied that there was nobody hiding in the broom cupboard, under her bed or in the shower cubicle, she told herself to cop on. Then her mobile beeped in her pocket and she jumped.

She pulled out a bin bag and picked up random objects—a couple of magazines, a hairbrush, Aaron’s yellow truck that she’d found under a cushion.

She opened the door to get Aaron’s toy garage off the balcony. She peeped over to see if the Bugaboo was still there. It was—taunting her from the canal wall. Otherwise the place was deserted, just a man walking a terrier near the lock.

‘Hey! I brought the Bugaboo back. I want my money.’

She jumped. The woman was standing directly beneath the balcony, looking up at her, her greying hair pulled back into a low ponytail. Aoife jerked her head back in and closed the door but she could still hear the woman shouting about faulty brakes and a torn hood.

She locked the door, flicked off the kitchen light and retreated to the sitting room. Baskerville was sprawled across the sofa but he lifted his head to make room for her and put it back down on her lap with a sigh that echoed her own. Then the intercom buzzed—two short blasts and a long one. The stupid wagon had come around to the front now. Well Aoife wouldn’t be letting her in. Baskerville growled at the bell. Aoife turned on the telly.

By ten o’clock there was still no sign of Joanne. The intercom had buzzed for a while but Aoife just turned up the volume on the telly. When she thought of checking her mobile she had two missed calls, and a voice message from Joanne.

‘Aoife, I forgot the code and don’t have my keys—why won’t you answer the door? I brought Aaron over to see you. And why did you throw my Bugaboo out?’ She could hear Aaron’s voice in the background—‘Are we going to see Aoife, Mammy?’—but Joanne shushed him and added, ‘I was going to give you three month’s mortgage payment but you can forget that.’

Aoife went to the bathroom to brush her teeth. It was too late to ring Joanne back now. She’d ring in the morning and explain. She examined her swan-pecked face in the mirror. There would be a nasty bruise behind the cut by morning.

She slept for a few hours but woke at 3 a.m. with the ridiculous idea that Mum2Three was on her balcony, waiting to attack her. God, that was so stupid, but she had to check or she’d never get back to sleep. She peered through the glass, then opened the balcony door slowly. There was nobody crouched behind the withered plants or hanging by their fingernails over the edge. She looked down on the oily black water of the canal that reflected the full moon. The Bugaboo was gone.

She lay back down on her bed and felt a wave of sadness. If she fell out with Joanne, she might never see Aaron again.

At 6 o’clock she gave up on the notion of sleep and decided to go out for a run. It would clear her head. When she got back, she’d phone Joanne. She’d arrange to meet her in town. It could all be sorted out.

She ran the short route around the park and was back within a half an hour, ready to jump in the shower. She pulled off her runners and poured a long glass of water at the sink. As she drank she heard the siren of an ambulance screaming down the canal. She peered over the balcony. It stopped right where she knew it would.

There were two guards and about ten passers-by standing near the canal wall, and three swans loitering like delinquents. She gnawed on a hang nail. This wasn’t happening. Was it possible that the stupid bitch had done away with herself over a bloody buggy? Aoife started to put back on her runners and tie her laces without thinking where she was going. She didn’t want to see what they had found. She didn’t want to know. She had to get out of there.

She only went as far as the café on the corner. As she stood in the queue she heard it: ‘A woman, face down in the canal. My wife saw them pulling her out. Terrible.’

She sat near the window. The guards would never be able to connect Mum2Three to Aoife, would they? Via the Bugaboo and the forum? Hardly. But what about her phone call to Aoife’s landline? And what if the neighbours had heard her shouting last night?

The news trickled in with the customers. There were police divers at the canal. There was more than one body. There were three—one of them a child.

Aoife felt her hands go all clammy. Was the child about four, with gorgeous dark curls? Did the woman have longer dark curls, possibly wearing a red leather jacket?

She thought of them coming over to the apartment, Joanne searching for her key, then lifting Aaron up to ring the bell. And the Bugaboo woman lurking nearby. An accusation, a scuffle, what the hell had happened?

She picked up her phone and scrolled through the last exchange of texts with Joanne. She read the one about dumping Joanne’s stuff in the canal and felt queasy.

‘Sorry I missed you,’ she texted, and added a smiley. ‘Call me.’

A pigeon landed on the window ledge and stared in at her. She ran her fingers along the cut on her cheek. A church bell tolled in the distance.

Originally from Ireland, Hilary McGrath lives in Gascony, France. Her short story, Kalashnikov for Shoes, was the winning story in the Writing West Midlands Short Fiction Competition 2013. Her stories also appear in Crannóg 37, The Incubator Journal, Spontaneity, and the Words with JAM Anthology 2014. Find her @hilary_mcgrath.