A story by Paula McGrath (Ireland). Published in Issue 23. 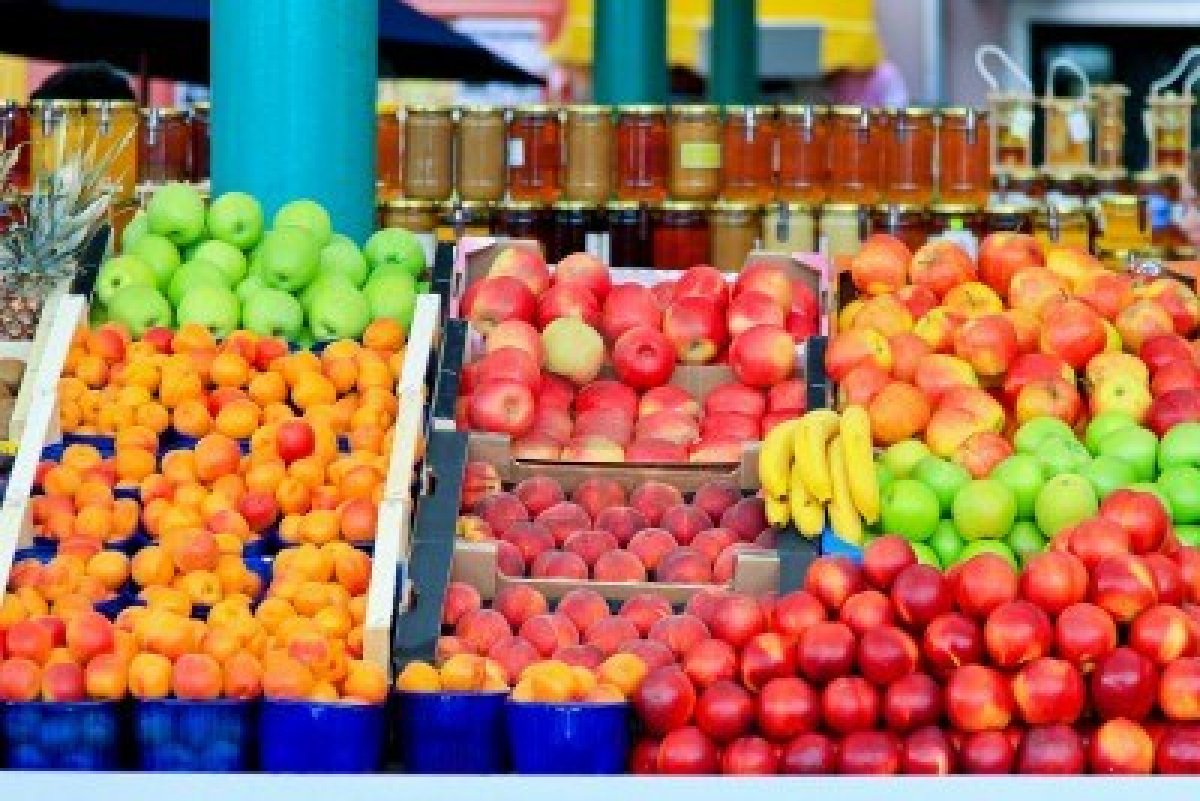 He sees them approach from North Clark out of the corner of his eye, another couple, another state-of-the-art stroller. Lincoln Park is full of them. Chicagoans, mindful that brown slush and six-foot drifts are never far behind and never too far away, embrace the Summer. These two are not enjoying themselves though. He can see by the way she is holding her arms across her chest, and the way he is determinedly pushing the stroller towards his Farm Fresh stall, not looking left or right.

- That's eighteen dollars to you. Enjoy. Yes Sir, give it a try and taste the difference for yourself. All organic. No pesticides, no artificial fertilizers. Mother Nature the way she should be. Thank you sir. And your change. Can I help you, Ma'am?

He reminds himself of the snake-oil man with his fast talk and quick sales. As they approach, the large, fair-haired man with an awkward gait, the slight woman with slouched shoulders, he can hear that they are speaking German.

He hadn't known he could speak German until he went to college. It sounded like an easy credit: German For Beginners. He knew a few words already. Only, when he got to class he discovered that he knew more than a few; he was fluent. Crazy. His Mom was supposed to speak English to him. His Dad had been emphatic. No son of his was going to be an ignorant immigrant, going around talking pigeon English. It was time to fo'get about all that. War. Camps. All that. His Dad didn't want to know about his Mom's all that. But his Dad was out all day selling his used-cars, so his Mom spoke German with him by day then switched to English at dinner, until he started school. He never slipped up once. He got his easy credit from a sceptical college teacher, but beyond that it changed nothing. He never even mentioned it to his Mom. For all he knew, she had forgotten how to speak it herself.

The stroller has a cup holder and three wheels with pneumatic tires though the parents don't look like they jog. The baby is large and sweaty-headed, asleep. The man is too tall for the height of the stroller handle.

- Hi there. What can I do you folks for?

The man steers the reluctant woman in front of him, his mouth twisted unpleasantly.

- You are the one who only eats organic. He swings the stroller around. - A joke, since you don't eat anything at all, do you Katja?

He leaves her stranded there and heads towards the playground though the baby is too young for the rides. Left alone with him she looks momentarily embarrassed but manages a little laugh and a shrug, as if things would seem fine if she could only pretend they were. He had to give her credit for that.

- Can I help? he asks, less the showman.

- Just some vegetables, she says, with her accent.

When she smiles her teeth seem too large for her mouth. - What is in season? She doesn't seem to even notice the myriad boxes of peppers and tomatoes and squash between them, laid out in oranges and reds, yellows and greens.

- I'm sorry. I did not catch the second?

- Cut-n-Come-Again. You just pick what you want for your salad... Are you a salad girl?

He knows she's not, not in the hearty way his ex-girlfriend was, great shovelfuls on the side with a beef-steak. You get a good appetite farming. Not this one. She's the pick-at-salad-and-call-it-dinner type. You can tell by her thin wrists, her pallor. She's unconsciously twisting her wedding band on her finger. She sees him watching.

- I might be, she says, lowering her hands and looking directly at him for the first time. - I like very fresh.

He raises an eyebrow. She answers by shaking back her hair and straightening her shoulders, thrusting small breasts forward in her blouse. It's the kind his Mom wears, ironed, with a collar. She looks like she needs taking care of. Her guy has had enough, by the looks of things.

- You know what's good for you, he says. He emphasises the first you. Singling her out from all the others. - You get it.

He holds her gaze. He's a good looking guy. He has been told often enough, about his deep brown eyes, his fit body. His Farmers' Market neighbours give him a hard time, saying it's why he makes so many sales, chatting up the ladies. But he's not like that. He makes no effort to impress, wearing whatever his hand falls on, more often than not what he takes off the night before. He rarely bothers to shave, and he cuts his own hair when it starts to annoy him. He is more into a good worker, the stronger, more weather-beaten the better, than one of these insipid girlies who stroll around the park at the weekends. If they want to interpret everything as flattery and flirtation it isn't his fault.

He holds out a handful of Sun Golds. She puts her hand lightly under his as if it needs steadying while she chooses. Coquettish. He can feel a tingle where she has made sure to stroke her finger as she picks the yellow fruit out of the centre of his palm. He can feel his dislike growing. He knows what comes next. She smells, gives a little coo, examines. Mouth open, tongue protruding just a little. Hesitates. Pops it in. Closes her eyes to seem to heighten the experience as she bursts the skin and  juice and seeds fill her mouth. In short, she tries to make it look like she's putting his dick in her mouth.

- Mm. It is sweet as candy, she breathes, looking at him as she eats, very slowly.

It's just a fucking tomato, lady, he thinks. Her husband has come back, but she hasn't noticed yet. He moves away to other customers, leaves them to it. But he can hear the poisonous gutturals from the other side of the stall. The man is saying something colloquial, something like, up to your old tricks again. It must be the verboten subject because she jolts back as if he has hit her, shrinks back into her shirt, her hair. His guess: one of them was already married when they got together. There would have been the sms-es full of longing and stroking and flattery, then the clandestine couplings. Then – ba-ba-ba-boom – she's pregnant, accident, design, whatever. They're stuck now. He's tired of them as they are of each other, wants them gone. He drifts back to where they are standing.

- The lettuces are on sale, since it's late in the day. There's a special on the Beefs too. Make a swell salad with mozzerella and basil, drizzle of olive oil. Smell.

Because other customers are listening, they obediently finger and sniff his produce. Sometimes he thinks he wants it for himself: the walks, coffees, conversations in bed - he glances towards the barber-striped canopy of the Coffee Monkey - then he gets reminded what it's really like. Makes him think of his parents. Shouting at each other at night, acting like everything is fine in the morning. As if kids are deaf, and dumb.

The couple has moved away to the basils.

- I think we can manage to take care of a few plants, she is saying in a subdued voice, her attempt to introduce levity.

- But you're never home, Katja. Hey, maybe the minder could water them.

There's something in his tone, even though he is smiling. She shoots him a glance.

She lowers her voice again but the flash of anger has made her audible.

- We could never buy a home on your salary. Not with your maintenance payments.

- So we pay someone to clean our house and mind our child. And our basil.

She knows he is listening to them, even though she does not know he can understand German.

- Then leave the infernal basil, she says.

- Yes. Leave the infernal basil. The infernal child too. Because Katja has to go to work, to conferences.

He does the inverted comma thing. The gloves are really coming off now.

The new woman, Áine, awn-ya he thinks, is back with coffee. He sees that she is taking in the couple, him. She knows something is up.

She kisses him self-consciously, one eye on the German girl. Staking a claim.

- It's busy enough all right. Were you busy here?

He can hear the edge of anxiety. She wants to know what exactly is going on. Already.

- Yeah. Want to handle this one? They're shopping for basil.

A test. Unfair, he knows. Heck, she's only been in the country a wet week. At first she doesn't know what to do with her coffee. But then she finds a crate under the table. Good for her. He turns and pretends an interest in two ladies choosing flowers, sideline his ex started.

She starts telling them about the basils, the Thai and the Lemon, the Purple Bush, the Cinnamon,  the Greek, Holy Basil, rattles them off in that funny Irish accent, even the ones missing their labels.

- The Sweet. This one is really easy to grow. Just pick off the stars as they come. They're great for the freezer.

He didn't know you could freeze it. Maybe this one has a few surprises for him after all.

The couple is at an impasse. She can't buy plants because she is never home to care for them. But she can't not because she has invested too much in this already, and everyone is watching, including him. Áine-awn-ya is waiting. At a loss what to do, the woman pretends to attend to the baby, who is still asleep. All conversation and commerce at the Farm Fresh stand is momentarily suspended, all eyes are on them. At last the husband snatches the nearest plant and throws dollars on the table. Áine glances over to where she knows he is watching, delighted with her first sale.

Paula McGrath has had work published in The Faber Academy Anthology (Dublin), Gangway, and Blacktape Press. Her short story Tea and Semantics appears in The Toucan Online (July 2012). She is currently enrolled in the MFA programme at UCD, Dublin, where she is concentrating on her fourth novel, Michaelangelos. Her third, Peter Peter, is under submission; the first two are under the bed.