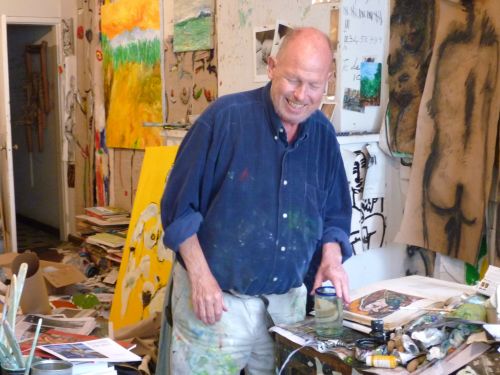 Phil Kelly was an Irish painter who took Mexican citizenship in 1999. Kelly's work is the work of an urban painter, one who lived in the ultimate urban environment of Mexico City. As well as the many cityscapes of Mexico DF, Kelly produced a number of striking figurative works, paintings of Oaxaca and Dublin, seascapes of Mexico and Cornwall and many ink drawings.

Phil Kelly's paintings are still exhibited regularly and he has work in several notable Mexican museums, including The Museum of Modern Art in Mexico City and The Museum of Modern Art of Oaxaca. Various paintings and drawings have been used as artwork for books published in Mexico, Ireland and in the UK and there are many pieces in private collections. This article by Marilyn Longstaff (cartoons by John Longstaff) looks back on Phil's life in the UK before moving to Mexico. A huge thank you to Ruth Munguia and all of Phil Kelly's family for giving The Ofi Press permission to use images of his artwork for this month's cover and throughout the magazine.

We first met Phil Kelly in Whitby, North Yorkshire in the 1970s. In those days, Whitby was a Mecca for young artists – affordable, quirky, quiet out-of-season, and best of all, by the sea. Phil, and his then partner, Ann Woods, lived in Hope Terrace – where Phil turned his lavatory into a Kurt Schwitters type ‘Merzbarn’. Ann shared a studio on Church Street (now Whitby bookshop) with John, who was beginning his life as a cartoonist. One of the first cartoons John had published in Private Eye had a Mexican connection (albeit a very Northern English take on Mexico).