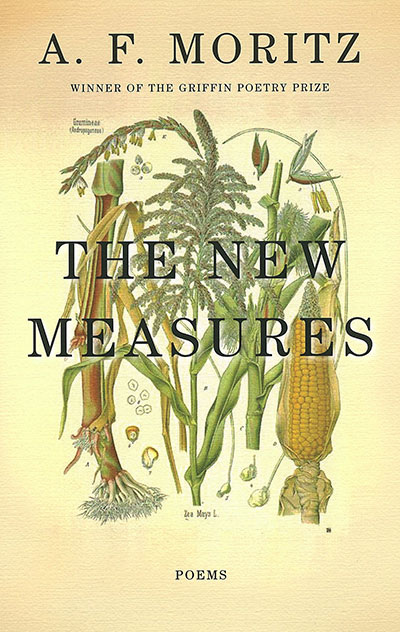 A. F. Moritz The New Measures

Published in The Ofi Press issue 36

The poetics of Albert F. Moritz in The New Measures can be summed up in this verse: “The first and simplest things were best” (from “Simplicity”), for it states the aim: to contemplate and think the world in those instants when the most subtle images and sounds of nature are disclosed to the poet. The poems of this book are built on the deep meaning of details, on the beauty of the ephemeral…and on the impossibility of inhabiting nature.

Exquisite and heartwarming images of nature such as trees, almonds, stones or shells are found throughout the poems, and this highlights the intensity of the lyrical experience when the poet thinks of his relationship with nature, as it happens in “The Stranger”. In these verses, the poet bursts onto a beach inhabited by stones, and a process of both reflective admiration and unrest takes place when he realizes his presence is that of an intruder; a verse reads thus: “One I remember/all black but for a burning, silver-dun/sprinkle of old stars”. These words speak of how the poet delivers himself to touching and admiring the little universes contained in the forms and colors of the stones, as if the microcosms could suddenly hold the infinite inside them and the poet were witnessing such a revelation. Contemplation at this level is possible because the acknowledged world becomes reachable to the poet by means of words: Moritz poetics remind us of the fact that poetry always implies the appropriation of the macrocosms and the individual experience of it.

The rejection of the city as landscape and machine is a complementary perspective to that of nature as the site of poetic revelation. Poems confronting these two apparently irreconcilable spaces are “At Erie”, in which some small shells resemble halls, buildings, and “silent roofs”, as well as “The New Measures”, in which the city is referred to as a mother and its inhabitants are prisoners in the roar of an inhuman music:

of the strides of skaters… limping of wheels,

and caught in the works of a fan, the wheeze-whistle

of loosening belts in old motors…

Moritz constantly returns to the dichotomy of the urban as noise and of the natural as the territory into  which the human intrudes. There is an acknowledgment of the constant irruption of the human into the natural, as if the relation between both spaces could not be determined otherwise: just as the poet becomes an intruder in the beach of stones in “The Stranger”, so is the machine in “Farm Engulfed” and “View from and of an Airplane”. In these poems, the noise of the machines smashes the contemplation of natural beauty and is even able to substitute for it; in “Farm Engulfed”, the poet tells us that “...the old machine/helps with the dry month—gives the hissing/of water, and sprouts the smell of rain-wet ground”. Notwithstanding the poet’s sympathy for refined images of nature, such as a cob, an oak’s bark, a pond about to receive winter or a horizontal rainfall witnessed from a train, he is also aware of how likely it is for nature to become the stage of death. In “Fukushima Dai-Ichi Psalm”, “The Cold: A Testament” and “News”, death is a complementary chance: it does not only mean tragedy or the impossibility of the regeneration of life, but also the necessary beauty of the immobile and hopelessness: “The cold will give me dark/for warmth and comfort. The cold is not so bad” (“The Cold: A Testament”).

On the other hand, the evocation of childhood can be considered as another possibility of contemplation of the ephemeral, as in “The Volcano”, where the image of an erupting volcano leads the poetic voice to recall an anthill once regarded during childhood, and this reflection leads to a genealogical quest based upon memory; naming the ancestors is thus enough to bring them back to life: “But she’s with us, she remembers/her grandfather, so he’s there too, and his/grandmother, since he recalls her”.

The poems of Moritz offer the reader the sensation of penetrating into an already known world because of the cyclic recurrence of images and topics, while at the same time we encounter in every poem elaborate proposals of lexis, imagery and feelings as in a “theme and variations”, since the poet constantly explores and abounds in every new meaning of the “simple things”.

At the same time, the consciousness of poetic creation beats throughout the multiplicity of verses and voices, and this happens from the beginning of The New Measures  in “ “The Book to Come”. Here, the poet reflects on how each poem is a new beginning, an independent and live unity despite its belonging to a wider group of creations. Therefore, each single poem is at the same time the precursor and the offspring of the rest:

This metaliterary exercise is also to be found in “The Visible Brother”, “Painting and Poem”, “In the Food Court” and “The Soliloquy”, which propose an intense and intimate relationship with words and with the series of mechanisms in which the miracle of poetry happens. The poet has an ambivalent approach to reality: he rejects it because of its “dictatorship of togetherness”, since the poet’s individuality is drowned amongst the mass, but at the same time the outer world encourages creation, as in “The Visible Brother”. The same happens in “Painting and Poem”, where the intertextuality between word and image allows Moritz to bereave the world of its visual empowerment —already represented and stolen in painting— in order to turn it into poetry: “And that’s why there’s nothing mild/beneath the image. Words scream out.”

This metaliterary reflection leads to intertextual exchange, such as the one found in the poems devoted to Northrop Frye, “Full Circle”, and to John Hollander, “Essential Poem”. In this poem, Moritz is not just dialoguing with a branch of English poetic tradition but also, and most importantly, he is portraying the figure of the poet as an early reader, achieving aesthetic pleasures on his own: “So Traherne pours over you/his wild remembrance of the world to come”.

The poem “Open House” is worthy of an approach of its own, since it closes the book as a whole in what it seems a possibility of rebirth. It is built by thirteen parts which seem to draw a crescendo that moves from the oppression to the freedom of the self and the body. We do not know who inhabits the house that is pictured from the beginning; we can only infer that this house along with all its objects is a metaphor of the body as a habitation, and that the self wishes to run away from its imprisonment. In order to achieve this, death and destruction are necessary, following the biblical tradition of the deluge, the plagues and the divine fire. The initial house thus becomes a ruin, an architecture of ashes, and at the end of the poem we are at last able to experience the freedom of body and soul:

So later they went out. Left the house open.

On the path through the fields alone together

They’d walk with their absent friends

each in the house of a body

that would be all doors.

In sum, The New Measures by Albert F. Moritz portrays the subtlety of simple and beautiful things with careful intensity and fury. By means of a profusion of images, metaphors and sensations the reader realizes the achievement of a long journey to the core of the self, and that Moritz’s poetic language has been the guide towards such discovery. His poetics explores a wide variety of languages and creates verbal atmospheres of spaces in which times does not seem to pass by: these poems are an invitation to contemplation and bewilderment always extended by words.

of the strides of skaters… limping of wheels,

and caught in the works of a fan, the wheeze-whistle

of loosening belts in old motors…

So later they went out. Left the house open.

On the path through the fields alone together

They’d walk with their absent friends

each in the house of a body

that would be all doors.