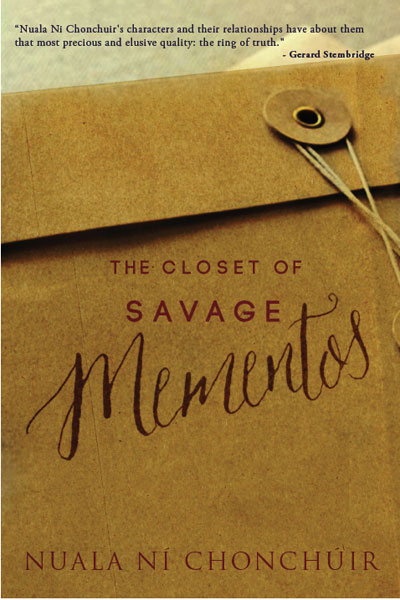 The Closet of Savage Mementos by Nuala Ní Chonchúir

Published by New Island Books and available in paperback and e-book format.

Review by Eniko Jakab (Luxembourg/Hungary). Published in issue 37 of The Ofi Press.

Loss, grief and motherhood lie at the very heart of Nuala Ní Chonchúir’s second novel, The Closet of Savage Mementos, a moving portrayal of a woman's journey towards reconciliation with the past. Lillis, twenty-one at the onset of the book, leaves behind Dublin and takes a summer job in Kinlochbrack, Scotland as an attempt to distance herself from haunting memories. In the small-town boutique hotel where she is employed, she escapes into a relationship with the owner, Struan, a man about 30 years her senior.

Yet in her thoughts, the young protagonist constantly relives the past, trying to cope with grief and guilt, and with the bitter realities of the life she left behind: her ambivalent relationship with her mother, Verity, who is at once eccentric, brilliant, unstable and abusive; and her unsupportive brother, Robin, who – just like her father – "does not tolerate tears and bad humour". But at the core of her despair and her sorrow is the tragic death of Dónal, childhood friend turned boyfriend. As Lillis consciously conjures up memories of him, taking him "back from death for a while", we get a moving account of their relationship, which was not free from controversial aspects. Lillis, while struggling with the feeling that she is somehow responsible for what happened, is in a relentless quest to analyse and understand Dónal and their relationship, finally arriving at a less idealized picture. At the same time, she is also searching to define who she herself really is, eventually revealing her innermost fear: that she becomes a person just like her mother. In a poignant episode when she spends some time with the new family of her father, she hears the terrifying conclusion from her half-brothers: "Mum says you are exactly like your mother… you like being sad". Ironically, her fear is mirrored by Verity's own: "Lillis reminds me so much of me that I could kill her." This dread finally causes Lillis to make a decision which will haunt her even more violently.

At the beginning of Book Two, 20 years later, Lillis, living in Dublin again, is still trapped in the past by guilt and grief, tormented by secrets she cannot tell, as she has been silenced by the betrayal of her loved ones: Struan, Robin and Verity. Finally, a journey back to Scotland enables her to start coming to terms with herself, embracing her life, and leaving Kinlochbrack to let it become "a place of memories".

In the book, artistic creativity offers a means to deal with all this pain. In a way mirroring her mother, Lillis also becomes and artist, making her passion for picture-taking a profession. Photos and the act of taking pictures appear as powerful motifs throughout the book: the antidote against forgetting and also against letting go. Apart from this, photography offers a fascinating contrast to Verity's profession (she is a taxidermist who transforms dead animals into grotesquely funny creations).

I loved the language of the book: the sombre, lyrical, unpretentious style, sometimes raw with grief. Later the prose becomes more subdued and melancholic, reflecting the inner state of the more mature protagonist, who is nevertheless still tormented by the savage mementos of her life. The descriptions are highly evocative and have strong emotional resonance, as if at times the landscape itself were filled with longing and heartache. The claustrophobic atmosphere of the Dublin and Glasgow scenes is in sharp contrast with the episodes in Galway and the Highlands, where the readers can almost feel the smell of the wind and the sea on their own faces.

It is a very condensed text: in less than 200 pages the author managed to create a compact world with compelling characters and a story rich with several layers. The metaphors and images – of objects, animals, nature – are seamlessly and meticulously woven into the fabric of the novel, each enriching and intensifying the next. The author examines femininity, motherhood, physical experiences, the body with passion and honesty. Motherhood as one of the main subject-matters is looked at from several angles: there are several versions of motherhood Lillis looks at and discards, eventually finding a way to be the mother she is "capable of being".

The Closet of Savage Mementos was partly inspired by events in the author's life. The title is adapted from Louise Erdrich poem ‘Advice to Myself’, featured in the epigraph: "the heart, that place / you don't even think of cleaning out". It is a poetic reflection of the novel, at the end of which Lillis indeed accomplishes the task of unlocking the secrets hidden inside her.