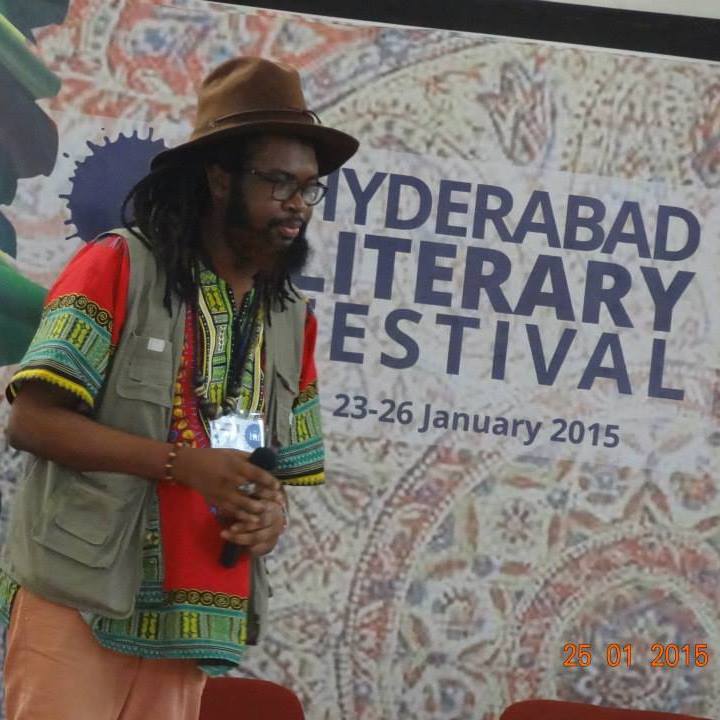 Onyeka Nwelue is a Nigerian writer, filmmaker, cultural entrepreneur and professor, who divides his time between Paris, France, Puebla, Mexico and Lagos, Nigeria. Award-winning author, Onyeka Nwelue is one of Africa’s youngest prolific and successful writers. Described by Channel O as ‘an unalloyed genius,’ Nwelue’s first novel, The Abyssinian Boy (DADA Books, 2009), written when he was 18 years old, is about a Nigerian woman married to a Brahmin Indian journalist. It was a National Bestseller, won the 2009 TM Aluko Prize for Fiction, the Ibrahim Tahir Prize for First Book and nominated for the Future Awards  and has been republished in India by Serene Woods.

His second book, Burnt (Hattus, 2014), a narrative in verse has been translated into Spanish, Italian, Yoruba and Igbo. It has been hailed by British-Hungarian poet, George Szirtes as 'breathless.' He won the Prince Claus Ticket Grant in 2013 to attend Writivism Festival in Uganda.

His latest book “Hip-Hop is Only for Children” was released in January 2015.

Interview carried out by Jack Little (Mexico) in December 2014.

Published in issue 40 of The Ofi Press.

1. Do you think that integration is important for us immigrants?

I think integration is extremely important. Some will not agree with me; the racist ones and being racist here isn't about feeling superior to other races, but for people who think that integration is contagious to humanity. There are reasons why we should integrate. It is not a scientific experiment, to birth children with beautiful brown skin and whatnot, but a total overhaul of mentality. We need to understand that this world, this life, is very colourful and should remain so. With integration, we can bridge a lot of things.

2. You're very well traveled. How have your experiences of travel and other cultures impacted upon your writing?

There is a certain way I see things that people don't see. My sense of reasoning completely changed once I started travelling. You know, you would think that this person from another race is different because his skin is different, then, you find out from travelling that he is really different. You need to meet him first to make that conclusion. If I didn't travel, I would rely on books, but books are not authentic materials that will change your perception of the world. It only shows you the world through one window.

3. What is the most important personal marker of identity for you? Does this change as you travel the world?

I am not rigid. I am extremely flexible. My opinions of last year are never my opinions of this year. I change all the time; just like a chameleon, which is natural to every human being. Most people will say they never do, but as long as a man keeps growing, getting sick, getting hungry, he or she should accept the fact that they change.

4. You're a vocal critic of many things in Nigeria. Do you believe that literature is a vehicle for change?

I do not believe literature is a vehicle for change. Let's say for example, in the writer's community in Nigeria, I know most of the older writers I've tried to work with who are very materialistic. I was shocked to discover that the writers could be more toxic than the politicians. There is a clique thing amongst them. They tend to gossip more and do the backbiting more than the politicians. It is appalling. Such messengers have no important message to change the society. They have been writing for ages, but what has changed in Nigeria? Nothing.

5. Is Nigeria home for you? If not, then where?

Nigeria is not home for me. For now. Nothing works in Nigeria. The heat is unbearable; the people are funny. Completely different mentality to handling issues. For now, I am homeless. Very homeless.

6. Please tell us about your new book. Do you have a background in hip-hop?

My new book is called, "Hip-Hop is Only for Children'. It is a creative non-fiction book. It takes a critical personal perspective on Nigerian hip-hop culture, as adopted by Nigerians with an American influence. The book, which has taken years to write, focuses on The Golden Age, The Silver Age, The Bronze Age, The Stone Age, with a heavy concentration on The New Age Generation, which includes Davido, WizKid, TerryG, Oritsefemi, MC Galaxy, Iyanya. My finds span years of personal and cultural research, travelling from Lagos to Accra, Monrovia, Kampala, Nairobi, Lilongwe and from Paris to Budapest, Brussels, Copenhagen and to Mexico City then to Delhi and many other cities scattered round the world, interacting with Nigerian hip-hop culture enthusiasts and promoters.

I have also gathered articles from different authors for the book. I have used blog posts by writers like Dami Ajayi, Mars Ezechukwu, Chika Onyenezi, Mitt Okorie, Onyeka George Mgbako, Tonye Altraide and Eromo Egbejule to back up my argument about this thing called Nigerian hip-hop".

I have worked in the music industry and I still do and I engage hip-hop musicians and culture every minute.

7. How have your first months been here in Mexico? What are your hopes for your time here?

Mexico is a strange place and Mexicans are stranger than I thought, but I find this place very alluring and appealing to my heart. I am going to stay longer than 10 years in Mexico, hopefully. Can this be my home? I think so. If there is an influx of a lot of Africans into Mexico, I will move to a more saner place. Maybe, move down to Panama. For now, I have lots of things that I want to do in Mexico and I need solitude. I don't want an 'African ensemble.'