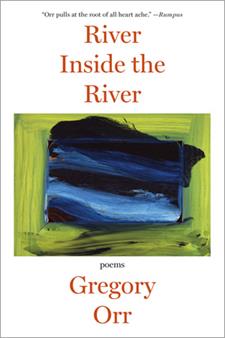 River Inside the River

This collection by US poet Gregory Orr is his 12th and most recent.  It is comprised of three poetic sequences.  In the first, “Eden and After” he retells, in his characteristic, lean poetic style, the story of Adam and Eve.  In the poem describing the exile from the Garden, Orr says of the birds

Seldom occurred to them

But when they heard

From the trees as one –

As if half the leaves

In Paradise had come undone.

Yet Adam and Eve find themselves outside the garden and learn to survive there in “A world inside the world.”

In the second sequence, “City of Poetry,” Orr writes “every poem is a house, and every house a poem.”  This section links to the previous one with reference to Adam and Eve as having made the first human city.  But there are lots of poets here, too.

By the angels dancing

All day on the roof…

Moored in the canal

Windows on the second floor:

In this city, every emotion is expressed, and it’s not just pretty emotions, but grief and horror as well.  But not every poem looks for a home.

Not all poems seek

Into an afternoon’s bower.

This city of poems continually transforms itself: new poems, new poets, and the shadows and ghost of old ones.  And this city of poetry is essential for Orr:

I am an old man

By the poems I love.

The final poetic sequence builds on the previous two.  Just as Adam and Eve built a life outside of the Garden, just as the city of poetry is essential for the poet’s survival, this final sequence, “River Inside the River” shows the power of language to restore the beloved, to recover a paradise that has been lost.

I want to lure her

In this net of words.

Through these poems the poet can remember joy and sorrow and promises of the beloved.  How lucky we are as poets, he tells us near the end of the final sequence,

And raise from oblivion’s

All that we most love.

This collection is a wonderful continuation of Orr’s previous work.  It’s a good introduction to those who are coming to him for the first time.  For those who are already fans of his work, it’s essential.