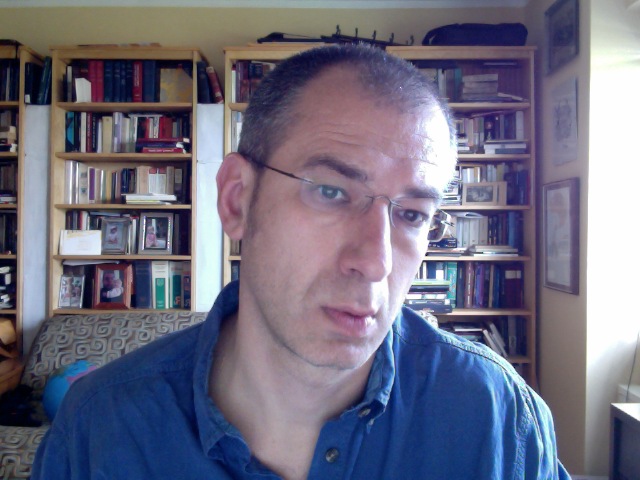 Eugene Ostashevsky is a Russian-American poet and translator residing in New York City. His books of poems include The Life and Opinions of DJ Spinoza and Iterature, both published by Ugly Duckling Presse. As translator, Ostashevsky has edited OBERIU: An Anthology of Russian Absurdism, the first English-language anthology of writings by a 1920s-30s Leningrad avant-garde group led by Alexander Vvedensky and Daniil Kharms. Look for videos of his poetry on YouTube and for recordings here.

Interview carried out by email in May 2012 by Jack Little. Published in Issue 20.

1. You seem to be very interested in intersections and interconnections between ideas. Could you explain more?

Are you asking because of the math? It’s a perfect language both for its precision and for its autonomy, for the fact that it provides its own objects. But, as Descartes complained, you can’t say much with it. So it’s beautiful tragically and in a way suicidally—a language that can articulate the object of its desire but can’t make even the slightest move in its direction. Whereas natural languages are messy and illogical and vague and tripping over themselves but there are things you can say or do with them that you can’t with math, or they give you aspects of the world that math does not give you. Of course, if you keep pressing them for meaning, getting more and more rigorous, they turn self-referential and then sink into gesture and then muteness very fast. I am an immigrant, so I find languages interesting.

2.       As a Russian-born American, how do your ideas of identity and the self impact upon your work?

When we had identity politics in the nineties, I would have said identity doesn’t impact me at all, but of course that would have been just a defense reaction. The fact that I grew up on Russian rather than English-language poetry places me somewhat outside of the American… grain? wool? woof and warp? “Woof and warp” is a good term for literary tradition. I don’t have the instincts, I don’t have the inborn likes and dislikes, and what I really don’t have is patience. Our poetry books—you read them to page four and then Red Hot Chili Peppers start singing “So fucking what?” in your head. But that’s a sign of a linguistic handicap, you know? I can’t tap into the beauty of the language of these poems as their author can. At the same time, American poetry is amazing for being so heterogeneous, vast and kind of borderless. It shades into British and South African and Shakespearean and fifteenth-century Scots and Jamaican and Yiddish and maybe even German and French and soon Urdu. And it certainly makes space for ESL. Russian poetry does not have that—it still obsesses about linguistic correctness, it got that bug from French classicism. Russian poetry has not even reconciled itself to its seventeenth and early eighteenth-century syllabicists. So, yes, I am part of the American woof and warp, but only because it’s broad and pliable and hospitable and self-reinventive enough to include me. Although, honestly, I am a New York poet, a downtown-and-Brooklyn-and-Queens poet, rather than American or Russian or anything else, except that I am also a Petersburg poet. Also, I don’t want to be a jerk, but your question has a dangling modifier.

3.       When you translate poetry, are you creating something new?

Yes. That’s what you should aim for. That’s how you know if your translation is good: if it’s poetry, but not such poetry as could have been achieved by the target language wallowing in its own devices. If it looks credible as a target-language poem, either you are translating the wrong poetry or you are translating it the wrong way. Instead of fighting your provinciality, you are strengthening it. My translation idol is the Russian Romantic Nikolay Gnedich, who published his Iliad in 1829, after twenty years of work. He started with classical versions, in alexandrines, and then had the courage to burn them and start anew, to manufacture his own syllabo-accentual version of the hexameter, with lots of insane archaisms in language and grammar. He gutted the Russian he came into and then built another Russian, one that includes Homer. One that lets Homer become the source of a new kind of Russian poetry, like Mandelstam. Because the point of translation is to expand the target language, to let it do what it couldn’t do before. Gnedich was working with German Romantic precedents, but unfortunately the English versions of Homer were always more domesticizing. I now teach the Robert Fagles, because it’s written in an English my students can read in two weeks rather than just dive for SparkNotes, but it’s really lazy and feeble as translation of poetry. It’s a failure. It won’t alter American literature.

I am a language poet. I am not a L=A=N=G=U=A=G=E poet but a language poet, in the sense that my poems are about language, or the interaction of language and reality, but never about “just reality.” I don’t believe in such as thing as “just reality.” A friend of mine, who is a German poet also working in English, wanted to be dismissive about a poetry reading, and she said, “It’s, like, so pre-language-turn.” For me, the heart of language is the pun. Puns are its opacity and materiality. They at once obstruct meaning and multiply it. By calling attention to the code—like a painted fly on a Flemish portrait—they behave in a manner that’s relativist and anti-totalitarian. Puns are about non-understanding and plural understanding, understanding with unresolved contradictions. What they are not about is the one-truth model. Most of what I make now is just puns, and I have even sunk so low as to make poems for the sake of puns. It’s not the main line of English-language practice. At the onset of the Enlightenment, John Dryden hated puns, thought them vulgar, a “groveling kind of wit.” But Dryden also said of Donne that “He affects the metaphysics… in his amorous verses, where nature only should reign; and perplexes the minds of the fair sex with nice speculations of philosophy, when he should engage their hearts, and entertain them with the softnesses of love.” I love “St Cecilia’s Day,” but its author… there must be a Yiddish word for that kind of person but I can’t remember it right now.

5.       Can we read texts without looking at their historical and social context?

Absolutely not. Except I just did that with Dryden. I mean, poor Dryden! He’s got Shakespeare for precedent, and Webster, and other people you can’t really compete against, and who also pun like they’re in vaudeville—but his age is the Restoration, and there’s the influence of the French Academy, and in general a pathos against polysemy, because they are still under that cute idea of converting natural languages into deductive systems that permit scientific statements about the world. So I guess I should have felt sorry for him, should have been more sympathetic. But you look at his prescriptions, and you are like, wow, what a shmendrik! There, I remembered it.