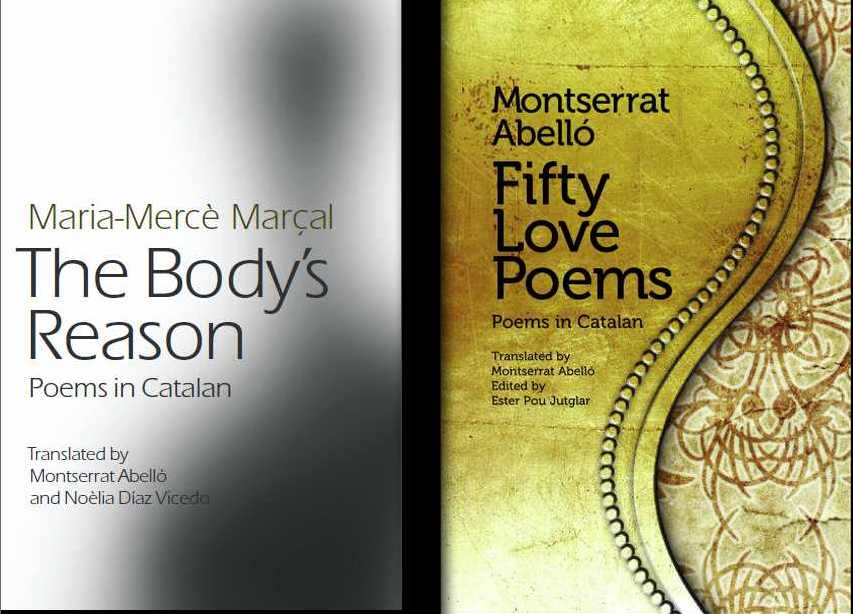 Published in issue 40 of The Ofi Press.

What a challenge Clive Boutle takes while specializing in editing and publishing works in European minority languages such as Catalan, so that they could reach a wider readership. In addition to this, these books look beautiful. I can’t but keep wondering how each title sells.

‘Fifty Love Poems’ is a selection from Montserrat Abelló’s previous collections published in Catalan (in and after 1963). Most of them can also be found in her Poetical Works, Al cor de les paraules (At the Heart of Words – 1963-2002). They were recently translated by Abelló herself.

is an open link

without subterfuge or framework,

with a short passionate you,

The poems are spare, full of internal music, evocative, honest and timeless, with references to tenderness, silence, solitude, longing, and a certain consciousness of the feminine condition.

“And these difficult loves,

of wanting to understand.

Oh how strange time is,

that soothes us whilst

it deepens our wounds.”

(And these difficult loves)

The book contains Maria-Mercè Marҫal’s last poetic works: twenty-two poems, of which the most well-known one is Lot’s Wife, “on an ancient story retold by Anna Akhmatova.”

The theme of the collection:

“With threads of oblivion

Some of the poems (for example I have denied you, I hatched the egg of white death) are fragments of a sequence about a well-sought-after mother.

Marҫal’s starting point is always some biographical fact, her own presence right now, with the potential changes as opposed to the comfort of death or kindly oblivion. Also, she continues a dialogue with Anglophone writers (Sylvia Plath, Anne Sexton). She brought feminism into Catalan literature, exploring herself (“to have been born a woman”) from different perspectives: as a lover, a mother, a daughter, as someone fighting cancer. One of her collections, The Mourning Witch (1979) dealt with the sisterhood of witches and fairies.

In her collection Thawing (1989) she referred to Sylvia Plath’s poem ‘Daddy’, while questioning patriarchal power.

For me the highlight of the current volume is a work by Surrealist artist Méret Oppenheim called ‘X-Ray of Méret Oppenheim’s skull’ (1960) (a skull with earrings) accompanied by Maria-Mercè Marҫals ironic poem entitled ‘Festival of Catalan Poetry’ (1995) with combinations of the x y chromosomes. The ending lines are as follows:

“Continue the series that I have started.

This is the skeleton: you can add the earring.”