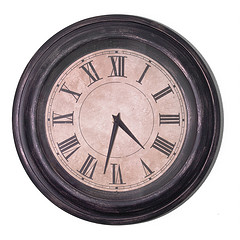 The two brown travel alarm clocks on your desk, almost identical clocks, your clocks, are keeping almost identical time. The one on the left is new, and therefore a slightly darker shade of brown. You have acquired it only yesterday as a replacement for the clock on the right, which you have owned for the previous three years. The older clock is worn to a lighter shade of brown and has a yellowed face. The new clock has a white face.

Several gray days pass, during which time the sun does not shine, and it snows a little, but both still clocks keep identical time, a time which corresponds to the time displayed on the glowing green dial of the digital clock in your bedroom. This is the clock you always set to the time shown on your television by the Weather Channel, the time you accept as the correct time.

You take the new clock, the darker brown one, with you when you go to work. It is an exact duplicate of your other clock, so your coworkers have not noticed that you have a new timepiece. They also no longer consider it strange when you pull out a small, brown travel alarm clock from your pocket when you need to know the time. Occasionally you forget and leave the alarm button up; and then, at the selected time the clock you have in your pocket begins a loud beeping.

This used to cause you a lot of embarrassment, until you realized that most people hearing the beeping think you must be a very important person who needs to answer a very important call. Thus you have taken to the practice of setting your clock, which you carry in your pocket, at times during the day when you know that you will be in a meeting, so you will have an excuse to run out of the room as if you have to attend to some other, more pressing, matter.

Several more gray days pass, during which time the sun does not come out, and it does not snow, yet both of your clocks still keep identical time. This fact makes you wonder why you bought the second, darker brown, clock as a replacement for the first.

The original clock, the first one of its type that you purchased, had stopped working. So you took it back to the store where you purchased it, and been told that the clock’s battery was dead. You replaced the battery there, but the clock’s function had not returned. Since the price of the clock was rather inexpensive, you bought a new clock on the spot, and took the clock that did not work, home with you, intending to mail it in for repair when you found the warranty, which you had misplaced.

Now the first clock, which you had replaced because it no longer worked, sits on your desk, keeping perfect time, as it has done ever since you introduced it to its successor.

You had not intended to begin a competition, as you were sure that the older, lighter brown, clock was no longer working when you placed the new darker brown, clock down next to it. You only meant to compare their physical properties to be sure that you had purchased a new clock exactly like your old one. Turning the two clocks over in your hand to compare their mechanics, you had, by habit, set the old clock to the correct time, which was displayed on the new one.

The two brown clocks put aside, you turn your attention to the pile of papers on your desk. You work for several hours, and glance at both clocks during that period. However, it is only when you decide to stop working, and look again at the clocks, the new one and the old one, that you become aware that both clocks are displaying the exact same time.

Taking both timepieces in your hands you put one to each ear. First the dark brown clock; tch . . . tch, and then the lighter brown one: tch . . . tch, each emitting their similar quartz, mercury battery sound. The new clock speaks, and the old clock responds almost immediately. You listen for several minutes, the tch . . . tch echoing in your head. A thick fog seems to be encompassing your mind; you wait in a stupor for the fog to lift and reveal to your brain what is hiding there.

You eat your dinner alone, and without appetite. When your meal is finished you rise, leaving your dirty plate on the kitchen table. You go to your desk. The two brown clocks are there, on the desktop, side by side, each showing the identical time. Walking to the window, you stand there, cleaning the remains of the meal lodged between your teeth with your tongue. You wipe your lips with your fingers. Across the square you can see the illuminated clock on the tower of a public building. You have never been in this building, but it is next to the library, where you go frequently. The big clock’s hands are folded in exactly the same position as those of your two small, brown, travel alarm clocks.

A quiver of fear pierces the fog of your mind. You press your face against the pane of your window, and gaze out into the darkening street. A man passing in the dull light looks down at his wrist, then up at the brightly lit clock on the public building, and then hurries away. You wonder if this is all that separates life and death— the rhythm of clocks? The hands of your alarm clocks press heavily on your mind, pushing the fog that had been enveloping your brain before them with a slow insistence.

Inside yourself you feel your soul flattening and dissolving, like the grease from your dinner that you suck from your teeth plunging ever deeper into its dull fear with the gathering dusk, while the body that is yours stands listless, gazing at the clock across the way with darkened eyes, helpless perturbed and human.

The old alarm clock, the one that you bought first, was not supposed to work. You had observed it not working for several days. You set it and it would go wrong. You bought the clock a new battery, which you installed using a clean handkerchief so as not to get any moisture on the contacts, but still it did not work. Now you hold the old clock in your hand and it will not stop.

Your left hand places the new clock carefully on the desk, while your right hand violently shakes the old clock. You compare the clock’s faces; the time is identical.

In the next day’s rare yellow morning, when the bright sun does slant through your window, and there is no snow falling, you rise from your bed and go to your desk. The two brown travel alarm clocks are there, on your brown desk, side by side, their hands in identical positions. You pick them both up, the old clock and the new clock, carefully putting one to each ear. You listen warily for the sounds that are not there. Pressing both clocks closer to your ears, you wait for the familiar: tch . . . tch, but all you hear is silence.

Both clocks have stopped.

Stephen Poleskie is an artist, and writer. His writing has appeared in journals in the USA, the UK, Germany, Italy, India, Australia, Mexico, and the Czech Republic. Poleskie has published seven novels, and a book of poetry. His artworks are in the collections of numerous museums, including the MoMA, and the Metropolitan Museum, in New York. He has taught at a number of schools, including: The School of Visual Arts, NYC, the University of California, Berkeley, Rhode Island School of Design, MIT, and Cornell University. Poleskie lives in Ithaca, NY with his wife the novelist Jeanne Mackin