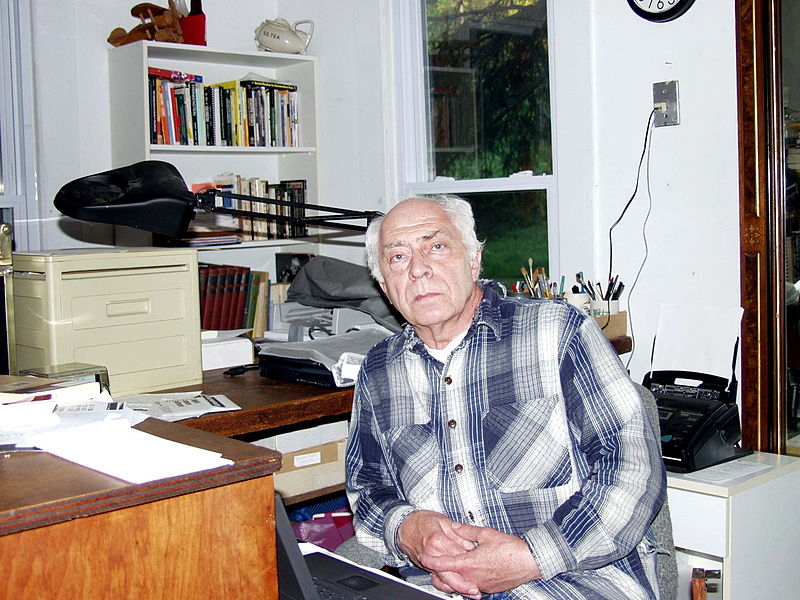 Stephen Poleskie is an artist, and writer. His writing has appeared in journals in the USA, the UK, Germany, Italy, India, Australia, Mexico, and the Czech Republic. Poleskie has published seven novels, and a book of poetry. His artworks are in the collections of numerous museums, including the MoMA, and the Metropolitan Museum, in New York. He has taught at a number of schools, including: The School of Visual Arts, NYC, the University of California, Berkeley, Rhode Island School of Design, MIT, and Cornell University. Poleskie lives in Ithaca, NY with his wife the novelist Jeanne Mackin

Interview carried out by email by Jack Little (UK)

1. To what extent is passion important for writing and art? Can a writer or an artist produce work with an impact without it?

The writer and the artist must love what they are doing. The work must be done for itself and for the joy of doing it. Without this we have nothing. If we enjoy our work we can continue despite whatever obstacles might present themselves.

There are in fact at this time many “literary markets,” more, I think, than at any other period in the past. The writer can, therefore, choose their own arena. There are many circumstances, other than our best efforts, that take us to where we are trying to go. I had friends who have arrived at their intended goal only to realize that this was not what they wanted. I have heard best-selling authors complain that what they now wrote was not what they wished, but dictated by their agent, editor, and publicist. In my own work I write what I want to, as best as I can, without worrying about where I might place it. As a consequence I have boxes full of unpublished novels and short stories cluttering my garage.

3. Is there one marker of your personal sense of identity that really stands out as an influence in your writing?

I would say that the primary “marker” of my personal identity that has influenced my writing is loneliness. I started school a year early, and so, being a short person anyway, I was always the smallest boy in my class, and therefore subject to bullying by the other children. And so, rather than going out to play, I preferred staying at home in my room, where I drew and cut out characters and made small theaters in shoe boxes for them to perform stories that I invented.

4. As a teacher yourself, how do you bring out the best in your students?

Unfortunately, during the thirty-three years I was involved in teaching, I have seen a steady decline in the quality of the students. This, perhaps, is a reflection of the commercialization of education itself.  When I came to Cornell in 1968 the United States was in the grip of a revolutionary fervor. Students wanted to learn in order to ferment change; a change that didn’t occur.  When I retired in 2000 the students I left behind were mostly interested in getting good grades. You cannot make your best work if you are trying to please someone else. No teacher can challenge a student if that student does not challenge them self. One of the things I am known for is screen printing, which I taught at Cornell and also ran a press in New York City, where I worked with Rauschenberg, Warhol and other major artists of the time. And where did I lean how to screen print? Certainly not in a classroom, but from reading a book, a technical reference manual I got free at my local Sherwin and Williams paint store.

5. You have presented your work all over the world. Did you ever feel a profound sense of culture shock in any of the countries that you have visited? Has travelling impacted upon you as a writer?

I would say that perhaps the most disappointing country I was a guest artist in was Honduras. This is not to say that the artists I met at the Escola de Belles Arêtes were not fine and generous people. What disappointed me most was their seeming lack of a cultural heritage. I was impressed when I learned that the ceramics students went to the mountains to dig their own clay, but disappointed to see the results, which were Mickey Mouse like figures that they hoped to sell in the outdoor markets. But that was 1982. Seeing the Mickey Mouse kind of sculptures that are produced by an artist I shall not name, but who is considered, at least price wise, to be one of America’s leading artists at the moment, these students were perhaps well ahead of their time.

Most of my stories are set in Wilbender, a fictional place I have created based on the area I grew up in in Northeast Pennsylvania. My novel “Vigilia’s Tempest,” however, has events taking place in Rome, Munich, and Locarno, Switzerland, places I have lived in for short periods.