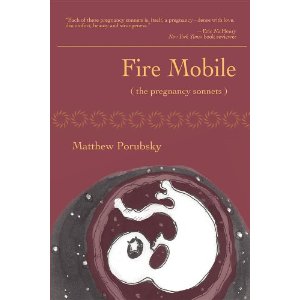 Matthew Porubsky’s book is a book of new beginnings, of birth and rebirth, the title “Fire Mobile” creating an image of a baby with his attention captivated by this hot and burning object. Here, perhaps the writer is the baby: held in awe by something he can feel, something he can see changing and turning but something ultimately that, as a man, must just look on, an observer. His poems speak from the voice of man in love.

Porubsky explores pregnancy through several different lenses: dreams, the body, sleeping and he does this through the sonnet form. Divided in the trimesters of pregnancy, Porubsky explores his profound love for his partner, the bizarre changes and feelings that come in the mother-to-be and the transformative power that having a child has on his life. The poet explores the role of man as he can but watch on as his wife carries her baby, the awe he feels at beholding this process of sacred femininity and the birth of new life:

Unconscious and innate, has been lifetimers

Admired – an outside view of a sculpture

His sonnets explore pregnancy in a playful manner giving a man’s eye view of the frustrations, joys and wonder of being pregnant. He shows great sensitivity in showing the beauty and wonder in the creative power of the human body and the changes that occur: “It seems your sense of smell has reached a new/level, somewhere near supernatural”. The animalistic, protective changes that occur to the mother to be do not go unnoticed.

While a sonnet may seem like a strange form to tackle this subject, Porubsky’s use of Shakespearean and Petrarchan forms he explores the beloved, the mother to be and his connect ion between lover, mother and child. Dennis Etzel Jr. notes in his introduction the motif of “the breath” which can be found throughout the book: the breathing mother and her rising and falling tummy of mother and the ten syllables of each line of a sonnet. At some points in the collection, strange breaks in the rhythm of the poems through punctuation and broken sentences sometimes create a feeling of uneven breaths, of fear and unknowing: the alienness of motherhood to man. An example is:

“In the water, hot and quiet, you wait

Unmoving for an internal motion.

Your feet are set steady and your arms out straight,

Floating. You stifle any vibration”

Along with the book’s elements profound coming of age element as a man about to be father, moments of humour add to the clear warmth and love shown between father and mother to be. Moreover a review of Porubsky’s collection wouldn’t be complete without a note to congratulate Stella Robins on her beautiful illustrations which accompany the poems. See below for an example.

In summary, Fire Mobile is a sensitive and engaging collection exploring birth, the creative power of the human body and the power of love in this turbulent and exciting time for a young couple during pregnancy. Porubsky sensitively but without sentimentality looks at the birth of his child as a timeless and beautiful phenomenon, one which he may only look upon as a man from the outside: “The song is ceased/ as you two unite, finally released.”

Matthew Porubsky’s first book of poetry, “voyeur poems,” was awarded the Kansas Authors Club Nelson Poetry Book Award in 2006. His various art pursuits have been honored by the University of Kansas, The Kansas Humanities Council, The Topeka Capital-Journal and other community/arts organizations  inclusing his 2009 documentary “Porubsky’s Transcendent Deli”. He is an occasional contributor to seveneightfive and XYZ magazines. He works as a switchman for the Union Pacific Railroad and lives in Topeka with his wife and children. Visit mppoetry.com for more details about books, films and poetry readings. 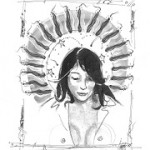 You shimmy off the sea-salt of sleeping,
unconscious waves of your heartbeats and dreams,
one hand below the cloud slowly building
in your belly which stretches to its seams
daily. Off-balanced steps center part-way
across the veneer, steadied by your breath,
as you envision the plotline in play
that changes your aplomb by length and breadth.

This embodied growth is partnered throughout -
swift draped hair on your shoulders, nails in quick
reaching, blouse unbuttoning. This about
you is a building, a timpani wick
lit and burning the shine of small kindling
to glow as a drumming never dwindling.

The small something inside subtly stirs
you to awareness, reaching around deep-
rooted dreams, steeping in fog-colored sleep.
You both have turned together so long, sure
of shared comfort and placement within bounds.
Now, this is a scribbling outside the lines,
beyond the sinew barrier confines
below sheets and skin. You swear you hear sounds
of liquid moving as the coil springs long
and defined, with formed joints testing limits.
It is a firmness pushing set permits
of a union shaped in growth. A new, strong
pressure wakes you to the ripening cast
discovering itself from your contrast