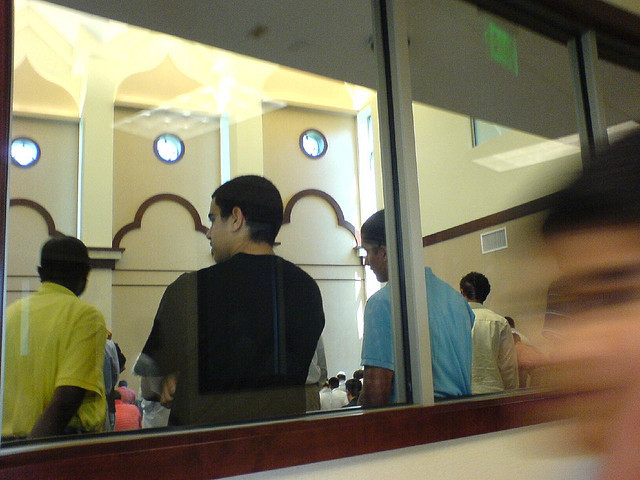 I don’t have a last name; at least not when I introduce myself,

without my father, the choleric Turk,

becoming Michael made me easier on the mouths of my white friends,

I slide onto German tongues,

the purring ‘k’ sound replaced by the deep guttural

the purling honeys of Mikaail replaced by the sharp, ejection of Michael;

But the hijab-clad girl at the library,

in her eyes, I am Mikaail bin Assad;

She calls me Assad in my mother’s voice;

She detects the Turkish tan on my white skin;

She sees the brown of my pupils;

She always greets me with salam alaikum even in front of

to be threaded with a walaikum salam and to quiver,

on a silver string,

My father’s friends object to my choices;

My mother tells them to mind their own business though behind

her deep, brown eyes something stirs,

she chose the name, on her return from the pilgrimage to Makkah,

wrapped my newborn form in an embroidered

cloth bought from Madina; I learnt about

prophetic love, prophetic sacrifice from her

tongue; she makes me Mikaail,

who turns the leaves of a gilded Quran,

who weeps at its lyrical verses, who rises to offer

the morning prayer; for her, I am only Mikaail--- wholeness—

to restore all that she lost in her crossing,

but mama, I have to leave you,

the weight of it; I have to become half,

of myself; I have to slice myself and keep,

Mama, I have had to become Mischi,

But it was Mikaail who carried you in his arms, that night,

You seemed so light and fragile,

I gave my name as Mikaail that night

to the on-call doctor,

It was Mikaail who whispered his prayers,

his pleas; your language rising to his lips;

Your language occupying the crevices of his mouth,

Words that had lain dormant

Words that could not save you.

Rakhshan Rizwan was born in Lahore, Pakistan and then moved to Germany where she studied Literature and New Media. She is currently a PhD candidate at Utrecht University in the Netherlands. Her poems have appeared in Papercuts, Cerebration, Muse India, The Missing Slate, Postcolonial Text and elsewhere. She is the winner of the Judith Khan Memorial Poetry Prize.

Image: 'Columbus Ohio (21) Inside the Mosque' by TijsB.