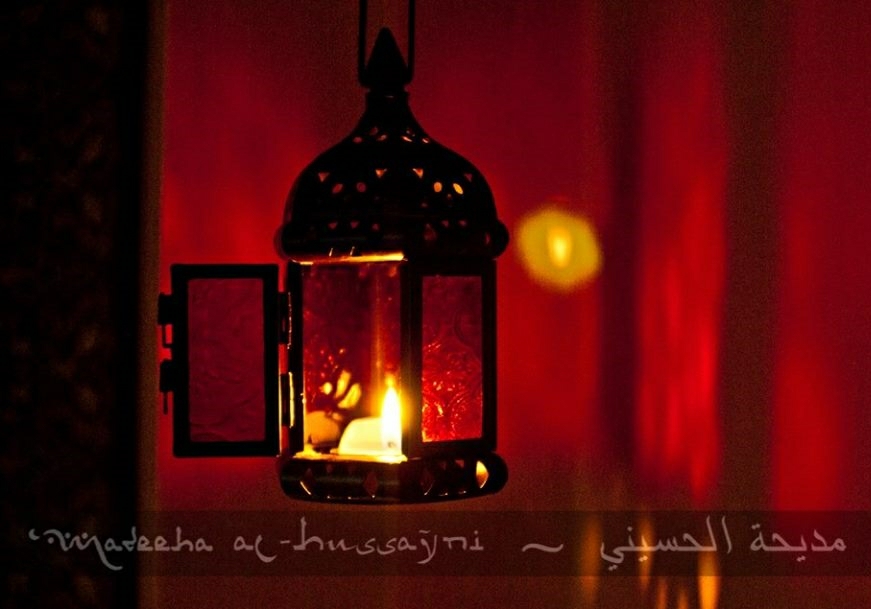 Allah is the Light of the heavens and the Earth. The similitude of His light is as a niche, wherein is a lamp. The lamp is in a crystal globe. The globe is bright as it were a glittering star lamp lit from a blessed olive tree neither of the east nor of the west, whose oil would well-nigh glow forth even though fire touched it not. Light upon light! Allah guides to His light whosoever He wills. And Allah sets forth parables for people, and Allah knows all things completely.

Glowing forth from houses for which Allah ordained that they be exalted and that His          name be commemorated in them. Glorify Him therein in the mornings and the evenings.

Ramadan is the ninth month of the Islamic calendar and one in which Muslims the world over fast from dawn to dusk in obedience to the Quranic injunction:

The fast (which begins with the dawn prayer) is supplemented by an intense study of The Holy Quran.  There is a verse in the Quran which states that the month of Ramadan is one during which or about which the Quran was revealed ‘as a Guidance for mankind’[1] meaning that this month comprises of all types of worship, it entitles one to fulfil the rights of God and the rights of one’s fellow beings (the prime purposes of religion).  As such, Ramadan is a month that captures the essence of the Quranic teachings:

The Quran is described in these verses as guidance for mankind, and as its revelation took   place in Ramadan, there is a deep link between this Holy month and guidance.  Now this           raises an interesting point. The verses here are addressing only the believers, so how can            Ramadan be described as Guidance for the whole of mankind? The answer can be found in             these very verses, where it is stated that previous generations had also been commanded to             fast. It is the law of Allah that all nations who received revelation from Allah were      commanded to fast in one form or another … The Kaaba is also described by the Quran as a Guidance for mankind.[2]

The Prophet Muhammad stated that in Ramadan the Gates of Paradise are flung open and the Gates of Hell are locked and devils are put into shackles.  In another Tradition he stated that the doors of God’s Mercy are opened in Ramadan:

Every man has his own universe, his own heaven and his own Earth. The above mentioned   Hadith is linked to this internal universe. A person who brings about changes in his inner-self and who adopts the virtues associated with this month, which incidentally are made easy during Ramadan, the doors of his heaven are opened and the doors of his hell are closed.  If this does not happen, if Ramadan has no positive impact, then the Hadith does not apply to that person’s universe. Now, why do the gates of paradise and mercy open more during Ramadan in comparison to the rest of the year? The reason is that an atmosphere of virtue and            piety comes into being during this month. People pay more attention to worship and are more inclined to offer sacrifices and to do good. Ramadan is a season in which hearts are inclined towards righteousness. It is important to avail of this atmosphere of piety.  Gradually the doors of paradise will open and the doors of hell will close.  The gates of heaven and hell mentioned in the Hadith are the gates of one’s own inner world.  The shackled devils are the devils of man’s own self. As a result, even a pious person progresses in virtue. To achieve   such progress, man is dependent on God’s Mercy. For his part man has to struggle hard to remove impieties from himself but his efforts and supplications attract the mercy of God.[3]

The Prophet Muhammad stated that one carries out every good act for oneself but one fasts for God and God is Himself its reward.[4]  The Quran states that fasting was prescribed for people before Islam and one can find fasting prescribed for the followers of all Divinely revealed faiths in one form or another.  Islam is the only one which prescribes a fast of complete abstinence from dawn to dusk.  In addition to abstinence from food or drink one is expected to hold one’s ears, eyes, tongue, hands and thoughts from sinful actions.  The Prophet said ‘Many get nothing out of their fast except hunger and thirst’.[5]

The Prophet Muhammad said that ‘In Paradise there are 8 gates. There is one gate called Rayan. None shall enter it except those who fast and after they enter it, it will be locked behind them and none else will enter through it’.[6]  The name Rayan has interesting connotations in many great religious traditions around the world.

Through fasting the rich and affluent are Divinely commanded to become poor so as to feel the suffering of their fellow poor, this enables one to practice spiritual contentment and to truly appreciate what one has.  The Prophet Muhammad said ‘Two joys await one who observes the fast; the joy of breaking the fast and of meeting the Lord’.[7]

To find out more about Ramadan and Islam, please go to: http://www.islam-guide.com/