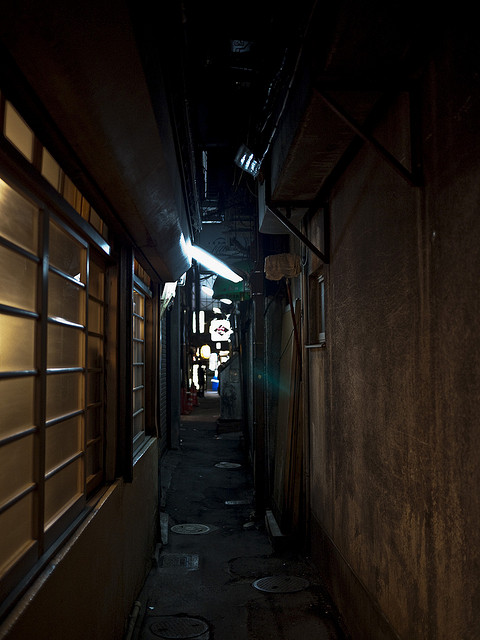 Published in Issue 34 of The Ofi Press.

I dreamed a terrible dream that I shot my wife and the mother-in-law, and then rushed out half dressed and opened fire at random, hitting passers- by , covered the pavement with corpses ...

Abruptly, I woke up, as if somebody had hit me hard in the liver. My heart was pounding, I was drenched in sweat and scared to death.

Then I remembered that I had no family and calmed down a little. Smoked a joint and went into the yard. And there the guys have fun, sing songs, dance, fire pistols. I am popular in my neighborhood. I am invited into the warm basement and treated with moonshine and pills. I drink and very soon completely forget everything .

In the morning, suffering from a 5 star hangover, I go to my girlfriend Deathcup. She gives me vodka and her usual bullshit. The gal is definitely insane. I know almost everything about her. She told me herself that once she had bitten her husband because of jealousy. The wound had not healed for a long time, festering . And then she was told by a friend, that he went to visit a woman. Deathcup ran away from work and set fire to the house of the slut. The lovers just sat down at the table to have a drink, before making love. That time her husband miraculously escaped from the house in flames, but she still got him. At a party, he invited a woman to dance, and Deathcup immediately grabbed a knife from the table and stabbed the man right in the heart, killing him instantly.

By the way, she was tried but acquitted.

Next day I had to go to the provinces. And there, in that shithole, I hit the bottle real hard. One man was drinking with me. Pretty cool character too. He boasted (and I believed him) that he dismembered personally forty dead bodies and flushed the remnants into the toilet. He, by the way, tried to convince me that vodka is very useful against radiation and cures all diseases in general. That’s why he drinks it every day. The girl with him - so neat, fresh, fair-haired, modest, pretty - drank half a liter of vodka and wasn't even drunk. Tough people live in the countryside I realized. Finaly this guy started talking strictly about machine guns. Insisted that the most reliable was a Maxim. And soon passed out. Me and the pretty blond continued drinking and eventually started to fuck.

In the morning I was fucking hungry coz I never eat while drinking. Unfortunately I was absolutely broke. When I couldn't stand it any longer I went to the store, stole a pack of ravioli and ate them  raw. I was starving, believe me. Soon I felt the acute abdominal pain. Took a shot of vodka and felt much better. That guy, the serial killer, was dead right

When I returned to town, I went straight to Deathcup, who gave me a glass of vodka and immediately got on top of me with all her powerful boobs, thighs and ass. She is a big cow, this crazy bitch. By the way, the clitoris in her vagina is absent - believe me or not. I was hard searching for it when I was first fucking the whore. No way. Didn't find a trace of it. That's for sure. No kidding. A miracle of nature. Or maybe she was circumcised, as it is the practice among certain peoples of Africa?

When I put it inside her, the fucker began to squeal, like a pig, which completely upset me, and, I, to get away from the grim reality, recalled one glorious ass. Oh, it was a unique specimen! So damn fine, lively, sensitive, independent, kind, very graceful... so wonderfully playing with her  buttocks, rolling them to the right and to the left, raising  them up abruptly... In short, it was super. I could call this asshole very real, intelligent, and thinking being.

"Did you hear that Americans,-  Deathcup was screaming, puffing and panting, - spread all sorts of diseases through their burgers made of crushed insects? I recently have been poisoned by chewing gum. Do you see that rash across my face ?"

Finally, I became dead tired of Deathcup, went home and hit the sack. I dreamt that I went for a walk. It was late at night. And in a dark alley I met a young man of pleasant appearance. We exchanged a few words, after which he smiled invitingly and said:

"Play with your dick while you're young ."

I didn't quite catch the meaning of his words and he explained. He has a friend whom he often blows and fuck in the ass. It's so cool, much better than to be with a woman.

By the way, you just imagine, I once suggested this stupid slut, Deathcup, to take my dick into her mouth. Another girl would thought it to be an honor, and this cow told me that she was not that ill-mannered. Bitch!

I remember her ​​cold-cold eyes and a contemptuous smile, when she was saying it. Oh, I'll never forget her brutal-stupid facial expression. That very night I had a terrible dream that I was taken to the police station together with the Chechen General Dudayev. And he was soon released, but I was put into a cell. I woke up in the night drenched in sweat. My heart danced like mad .

And the young man that I met in the dark alley, he was so handsome and so well dressed, that I just could not help but hitting him on the head with a brick. That's it.